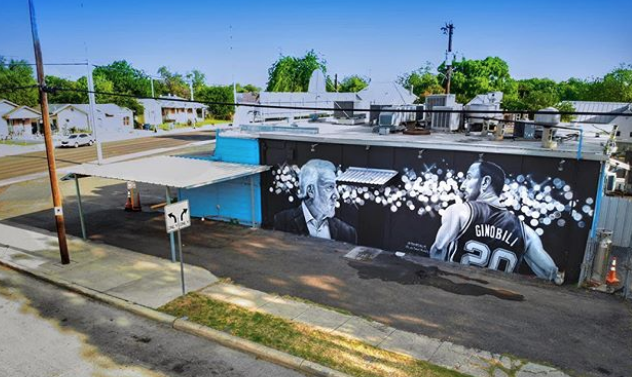 A few weeks after completing a Manu Ginobili mural at Rudy's Seafood on South Flores, San Antonio artist Nik Soupè has unveiled an addition to the wall: a tribute to Spurs coach Gregg Popovich.

On Thursday, social media users began sharing photos of the mural, which features a serious-faced Popovich.

Went to visit Pop this morning. I’m shook. Pop’s always been all about life first, then basketball. He enjoys wine, politics, food, relationships, history and yes, basketball too. Our coach of over 20 years he almost feel like family. My heart breaks for Coach Pop and his family. He’s the NBA’s lead professor, the mentor and teacher to other coaches and GM’s. It’s good to see all the love come from around the league. #SpursFamily #gospursgo #spursnation #spurs #pop #coachpop #erinpopovich @spurs @souplaws

The tribute comes just days after the passing of Popovich's wife, Erin, who had been sick for some time, according to other outlets. Also on Thursday, the Spurs released a tribute video to Erin, who was married to Coach Pop for more than 40 years.