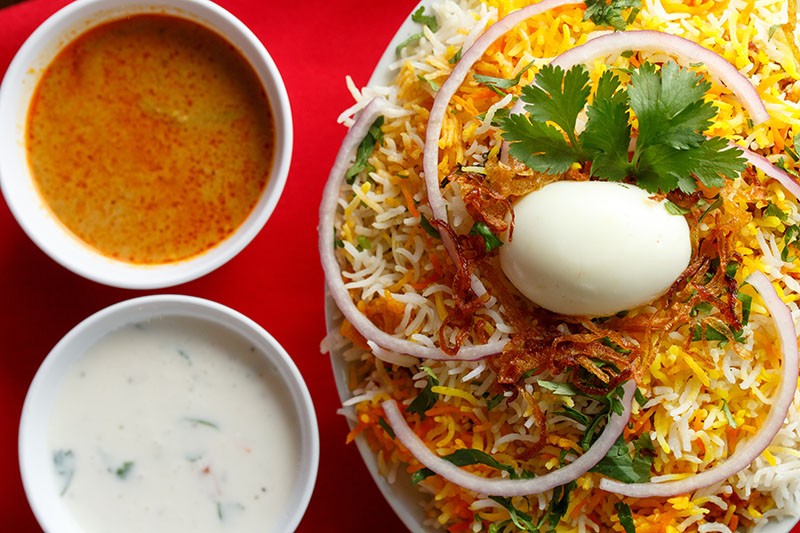 Do people even have atlases these days — never mind a library to house them in? If you're the anachronistic owner of one such treasure, now's the time to pull it out. If not, get thee to Google Earth or your favorite source of geographic information. Today we're taking a hike to Hyderabad — it's closer than you think.

Biryani Pot is part of a small chain of Hyderabadi restaurants. Hyderabad itself was once a princely state during British rule of India; borders of this southeastern province have shifted many times since, but we assume only out of innocence, the area's cuisine has remained more constant. The restaurant representing that cuisine here has popped up in a clean and colorful space near the Medical Center, a kind of stateless sector of our own shifting city not incidentally the home of numerous Indian doctors. One of these, with Hyderabadi roots, recommended the place.

The cuisine, quite different from that of Northern India — or even the opposite, Coconut Coast, for that matter, may be comfort food, but we can kick start our voyage of discovery with the street-food-like egg bonda, a hardboiled egg that's dipped in seasoned chickpea batter and deep fried. BP's appealing rendition, dusted with chili powder, is pretty straightforward, and we can imagine it, perhaps heretically, with a mild chutney. But we'll hold back, waiting for our heat in the form of the gobi Manchurian, a popular Indo-Chinese dish with a crunchy, flour and cornstarch coating and a saucy, sweet-sour-spicy kick. Beer would be good here, but since it's not available, an unusually complex salted lassi — perfumed with cinnamon and cardamom — does the job just fine.

Goat bounds to the fore in the entrée section with the earthy-herby house special curry, generously portioned, deeply red with chiles and only marginally bony. For a less assertive take on our favorite can-chomping scavenger, consider the creamy kurma with yogurt and cashews. The meat in this dish was less abundant, but the overall impression was of greater luxury. (There's a dish labeled mutton Mandakini with chilies and chopped egg we're less inclined to try, if only for tough to the tooth implications.) BP's fish curry, with curry leaves and black mustard seed, shows off the style of the larger Andhra region of which Hyderabad is a part. And as it's in the name, a biriyani: the chicken dum (the term refers to an ancient, slow- cooking technique for meats) is suggested for its impeccable, long-grain rice, moist, marinated chicken and delicate spiciness. Goat makes a cameo appearance in another biryani variation, and the meat-averse will appreciate versions with egg and vegetables. The helpful staff can help newbies navigate other dishes, such as the various masalas and kurmas, as well as curries and kormas.

A mild raita, not on the menu, can be supplied by the kitchen as an accompaniment to any of the above dishes. Throw in some spicy-creamy tadka dal, add a brace of garlic and basil naan, and you can cross another cuisine off the bucket list — the better, perhaps, for having done so here. By many accounts, Hyderabad, now called Cyberabad by techies, today shows little of its former, princely self.