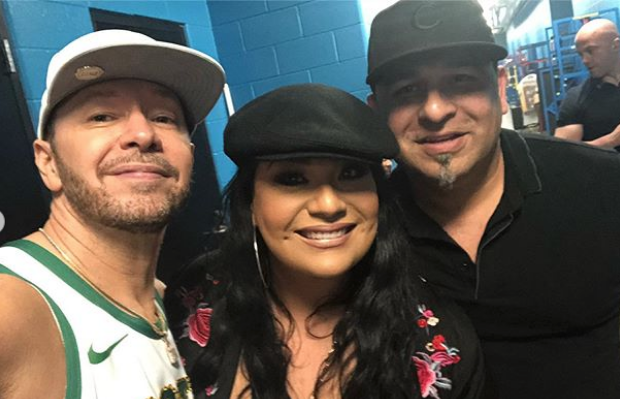 During a stop in Corpus Christi on Monday night, '80s stars New Kids on the Block likely made the 30- and 40-something crowd fall that much more in love with them.

The boyband performed a tribute to late Tejano queen Selena during their show. In between hit singles — and with loud fangirl screams in the background — the group included a dance break to the singer's iconic track "Bidi Bidi Bom Bom." They even brought a lucky fan on stage.
After the show, group member Donnie Wahlberg shared a photo on Instagram featuring Selena's sister Suzette Quintanilla. In the post, Wahlberg said he was "humbled" the moment he realized Quintanilla was in the audience during his tribute to "an angel."

When you play a concert in Corpus Christi Texas and you do a tribute to an angel — Selena — without even knowing that her wonderful sister Suzette @suzettesyld — an angel herself — is standing in the front row. Then you see her in the front row and time literally stops! I am so humbled by this moment. So blessed to have been a part of this moment. So overwhelmed to see the love and respect that this amazing family rightfully gets in their hometown! Much love and respect to A.B. and Suzette! #RIPSelena 🙏🏼❤️

The '80s heartthrobs will stop by the AT&T Center on Thursday. Maybe the Alamo City will be blessed with a Selena tribute, too.