New Kids on the Block: Roadmap Brewing Opens This Weekend 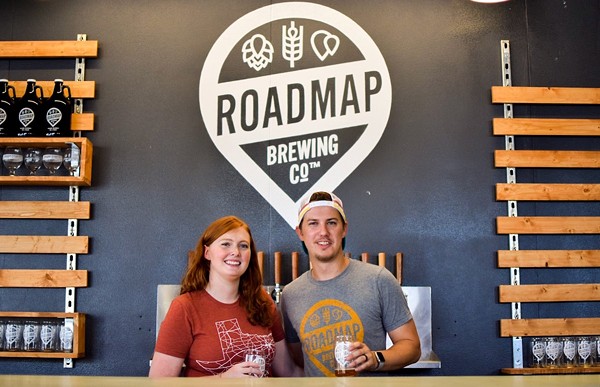 Downtown will gain another brewery with the opening of Roadmap Brewing this Saturday.

Former middle-school teacher Dustin Baker and wife Hannah relocated to San Antonio two years ago for Dustin’s last teaching job. A homebrewer for the past several years, Dustin had grown weary of the school system. A year after moving to San Antonio, he put in his letter of resignation and embarked on what they call a “wild journey.”

Finding a location for the brewery took a little over 10 months with the Bakers looking at spots in downtown Boerne, in Southtown, off Grayson, and inside a Crossfit box near the corner of Alamo and 8th. But they landed on a 8,200 square-foot space smack dab between the Riverwalk and the Pearl, with apartment high rises springing up nearby.

“We’re the closest brewery to the Alamo,” Hannah said.

Roadmap will feature 7,000 square feet of open seating and an open concept, designed in part by Smithdish and Studio MPH, where brewery-goers can get a sense for where their beer came from. The pair is shooting for an indoor beer garden feel — with the addition of HVAC, of course — and yard games such as corn hole and giant Jenga help nail that vibe.

Baker will have nine beers on tap for Saturday’s opening, anchored by his core brews. Expect to find an Obligatory kolsch, a Say What saison, Mama Dukes IPA and a Wake Up Call coffee stout and eventually a full lineup of 12 beers.
Though Dustin is an IPA man himself, he knows he has to keep a varied list for his audience. Expect an Irish Red down the road and a Lil Rhody, a hoppy take on Del’s Lemonade from his native Rhode Island.

But don’t expect to find these at your local H-E-B or bottle shop any time soon.

“We want to keep all the beers sold here to control the product and the story behind it,” Dustin said.

Don’t expect a lot of screens, either. Though movie nights are in the works in the coming weeks and months, the Bakers want people to interact with each other when they visit the brewery.

“We are technically millennials, [so] we want people to come here and go make friends if they didn’t come with friends,” Dustin said.

Yoga by Mobile Om is already slated for Saturday mornings at 11 inside the brewery, as well as different food trucks on weekends.

Opening hours will be 4 to 10 p.m. Wednesday and Thursday, 4 p.m. to midnight Friday, noon to midnight Saturday and noon to 8 p.m. Sunday.