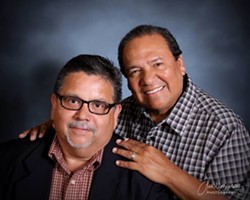 A new marriage equality ad campaign puts San Antonio front and center with the high-profile social issue that will be soon resolved by the country's top court.

Freedom to Marry, a non-profit group started in 2003 by civil rights lawyer Evan Wolfson, through its "Familia es Familia" project, launches tonight a TV ad campaign in a handful of Texas cities, including San Antonio.

The ads come in English and Spanish versions and are slated to be aired on Univisión.

The point is to target Texas for being one of the holdouts nationally for refusing to recognize same-sex marriage.

Americans' take on the issue has changed dramatically over the last decade, with an overwhelming majority of the public now supporting the right for LGBT couples to marry.

It has been playing out in the nation's legal system and the Supreme Court is expected to rule on it at the end of this month.

"The community has come a long way and we're building momentum," Sergio López, 34, a San Antonio native and director of programming at Freedom to Marry, based in Washington, D.C., told the San Antonio Current.

"America is ready," added López, who's gay and has seen for himself significant positive changes in support of SA's LGBT community over the years. "And we want to show that Latinos are part of it all."


The ad includes San Antonio couple Brad Veloz and Mike Rodríguez, who have been together for no less than 38 years.

They met in 1977 at the former San Antonio Country bar on the River Walk, back when the river was merely a "charco," Veloz quipped in an interview with the Current.

And the rest is history.

Lots and lots of history. Not just as couple, but as an activist couple.

For many years, as with the rest of SA's LGBT community, they remained in the closet, never daring to come out to their families.

That all changed in 1987, when they helped organize that year's March on Washington. They were living in DC and they hosted 25 women from all over the country, including SA's Letitia Gómez.

It was at that massive gathering, after hearing civil rights icon César Chávez call for equality and for LBGT people to come out, that he actually decided to do it, Veloz said.

"It was so emotional," Veloz recalled, his voice shaking and then he began crying. "Our families were so  supportive! I even came out at work and everyone was so accepting."

Then they took their activism to Houston before moving back to SA in 1992, when they got involved with the Esperanza Peace and Justice Center, as well as establishing the first Latino LBGT Council of the League of United Latin American Citizens, or LULAC, the nation's oldest Hispanic civil rights organization.


Veloz and Rodríguez decided to get married two years ago. They went back to DC for the occasion, but they would have much rather preferred to have tied the knot at home in SA.

"I feel like I'm not even a citizen in Texas, that I have no rights here," Veloz lamented. "We don't enjoy the same benefits that married couples have here. It just saddens me that Texas hasn't recognized marriage equality."

And that's why the couple volunteered to share their story for Freedom to Marry's awareness campaign.