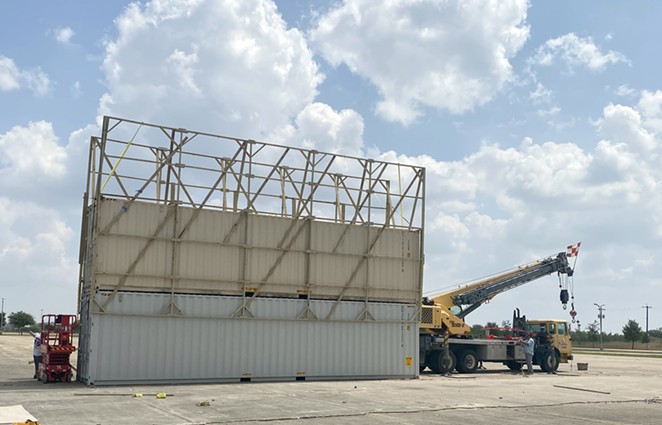 With the pandemic slashing attendance at indoor movie theaters, the rise in popularity of drive-ins has been evident locally with pop-up theaters staged by Rooftop Cinema Club and EVO Entertainment Group.

Now, add the New Mission Outdoor Theater to the mix — although its developer is aspiring for a little more permanence.

Named after the Mission Drive-In Theater on Roosevelt Avenue — which closed in 2003, leaving San Antonio with zero drive-ins — the new South Side outdoor theater aims to pick up where its predecessor left off.

“I used to go to the Mission Drive-In when I was a child,” said New Mission Outdoor Theater owner Fred Reyes, a data center manager and former Rey Feo Fiesta San Antonio ambassador. “I wasn’t trying to step on anybody’s toes with the name. For me, it was about coming together to do something. That’s the community experience I want to bring back to the South Side. I’m resurrecting it.”

While the two theaters share a similar name, recreating the original Mission Drive-In would be tough.

For one thing, aficionados argue over what constitutes a real drive-in theater. According to the United Drive-In Theatre Owners Association (UDITOA), there are only 12 permanent drive-in movie theaters still operating in Texas. The closest of those is the Stars & Stripes Drive-In Theatre in New Braunfels.

Unlike the original Mission and Stars & Stripes, the two 20-by-40-foot movie screens at the New Mission Outdoor Theater don't match the size of those at traditional drive-ins. The screens at the new theater, located at 8069 Challenger Blvd. in the former Brooks Air Force Base, are makeshift structures built on large shipping containers.

In contrast, the screens at Stars & Stripes are more than twice that size.

Other recent drive-in upstarts don't exactly match the scale or permanence of the older properties either. Rooftop Cinema Club presents its films on an inflatable screen, while EVO shows its movies on a makeshift screen hung on its indoor theater building.

Reyes said his structure is “a little more permanent” than a pop-up movie theater but “not anchored into the ground.” According to UDITOA, a new, one-screen drive-in theater would cost $300,000 to $500,000 to build. Reyes estimates the price tag for the New Mission Outdoor Theater is closer to $100,000 since “a lot of the infrastructure was already there.”

Also, unlike traditional drive-ins, the New Mission Outdoor Theater won't show first-run movies. Instead, it will follow the lead of Rooftop Cinema Club and EVO Entertainment and show classics such as Ghostbusters, Jurassic Park and Raiders of the Lost Ark.

“Showing first-run movies is a battle for another day,” Reyes said. “First, I want to show everyone that I am viable and that I’m not just a pop-up theater.”

Even so, if you want to watch Tenet this weekend and aren't ready to go into an indoor movie theater, the closest first-run drive-in is still a 45-minute commute from downtown San Antonio.

The grand opening for the New Mission Outdoor Theater is Friday, September 4. For movie showtimes and to purchase tickets, visit its website.