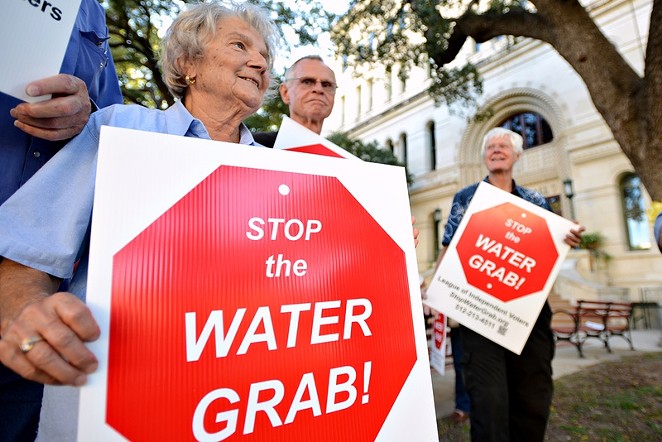 Abengoa, the Spanish company the City and San Antonio Water System leaders originally picked to head up the Vista Ridge Pipeline, will hand 100-percent of decision-making authority to its construction partner, Garney Construction, pending SAWS board approval. Taylor sits on the SAWS board.

"I am pleased that the negotiations between Garney and Abengoa have been brought to a successful conclusion," Taylor says in a statement. "Garney's purchase of 80% of the project equity and project control has been accepted, subject to SAWS consent."

Since Abengoa can't pay its bills, SAWS had to scramble to find a new investor to cover 80 percent of the project. Abengoa still has a 20 percent stake in the pipeline.

SAWS CEO Robert R. Puente says in a press release that new leadership is a positive step for the project, which has been steeped in controversy as much as it has been heralded as the future of Alamo City water.

Puente says Garney has a long history with SAWS, going back 30 years, and has worked on $156 million worth of major projects, including the Aquifer Storage and Recovery facility, the Carrizo Aquifer project and the SAWS water recycling pipeline. The company is also building a 28-mile integration pipeline to bring water from the desalination plant, which opens in October, and the aquifer storage facility to the South and West sides of San Antonio.

SAWS says its board could consider the proposal next month and says the original contract will not be changed. SAWS is expected to provide City Council with a full briefing during an April update.

"The Vista Ridge project team wants to have its cake and eat it too," Lauren Ice, a staff attorney with the Save Our Springs Alliance, says in a press release. "A private company has created this water supply corporation to get the benefits of a public entity, namely eminent domain, yet when the public requests access to information as straight forward as meeting minutes, the Corporation tries to hide from the open records law."

The Attorney General's Office sided with the Central Texas Regional Water Supply Corporation and the Save Our Springs Alliance hopes the Travis County District Court will overrule the AG's office.

The corporation was created during the 2014 SAWS deal with Abengoa that was approved by City Council. The entity's website contains no information about board members nor does it have any agendas or upcoming agendas posted. There is no information about public meetings on the website, either. While there's a link, all it says is "under construction."

The Save Our Springs Alliance says a majority of its four-member board are affiliated with Abengoa.

Lastly, earlier this month, the San Antonio Express-News revealed that Mayor Taylor accepted a $1,000 campaign contribution, the maximum allowable, from Sam Dawson, CEO of Pape-Dawson Engineers, a project engineer and environmental consultant for the Vista Ridge Consortium, just four days after after City Council voted to embark on the $3.4 billion project in October 2014.

According to the paper, the contribution may violate San Antonio's Municipal Campaign Finance Code, which says people seeking high-profile contracts can't make contributions to a council member until at least a month after the contract is approved.