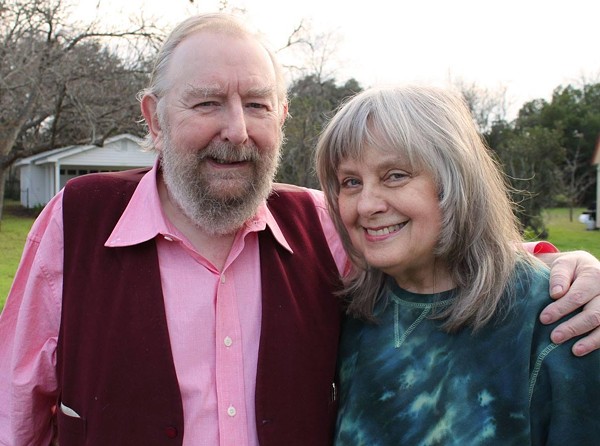 Even if you haven’t read Michael Moorcock, you’ve likely encountered his ideas and influence in the fantastic end of the pop culture spectrum.

The gritty, morally ambiguous fantasy of George R.R. Martin’s A Song of Ice and Fire? Moorcock went there first with his Elric sword and sorcery novels. The mashup of science fiction and rock ‘n’ roll? The dirigibles and steam-powered Victoriana of steampunk? Science fiction as literary fiction? Moorcock was hitting on all of those present literary conventions as well — and as early as the ’60s and ’70s.

Moorcock isn’t a regular at science fiction conventions, so his presence at the upcoming San Antonio Pop Con is a rare treat for local fans — an opportunity to interact with one of the grand masters who helped redefine a genre.

While the British author, who now lives part of the year in a small town east of Austin, is best known as the guy who made fantasy and SF part of ’60s counterculture, he’s never been willing to hang his hat on that alone.

Moorcock’s published more than 80 books, edited a groundbreaking science fiction magazine and, unlike a lot of his contemporaries, he didn’t just inspire lyrics for spaced-out rock bands. He directly collaborated with them, cowriting songs with Hawkwind and Blue Oyster Cult and drafting members of both to play on his own musical projects.

“In my era, almost everybody in rock ’n’ roll read science fiction,” Moorcock said during a recent interview in his home. “I could pretty much go anywhere, talk to anyone in the music business and say, ‘I like your work a lot,’ and they’d say the same back to me.’ That went for Pink Floyd very early on, Syd Barrett anyway. He said, ‘Set the Controls for the Heart of the Sun’ was based on one of my books.’”

Beyond his credentials as a member of London’s psychedelic counterculture, Moorcock was also a groundbreaking editor and tastemaker. While running the British science fiction magazine New Worlds, he was among the first to publish writers that represented a more literary and experimental side of the genre, many of whom — J.G. Ballard, Brian Aldiss and Thomas Disch among them — went on to become icons.

“What we did at New Worlds was publish stuff nobody else would publish,” Moorcock said. “What I discovered was that if something was put into print, that was a validation of its worth. The book publishers would look at what we’d published and say, ‘Well, it’s been in print once, then we can do it again.’”

As Moorcock discussed those days, it almost seemed like a surreal narrative slipping through time and space. He wove a tale about the time the buttoned-down Aldiss falsely accused one of Moorcock’s hippy musician friends of nicking his wallet. Then another about the time he was invited onto the set of 2001: A Space Odyssey only to be shushed by Stanley Kubrick. Then he mused how he and author Kingsley Amis worked up such a mutual hatred that they refused to travel in the same train compartment together.

And despite Moorcock’s unashamed association with the worlds of science fiction and fantasy, his influence has transcended the genres he helped define.

Michael Chabon, the Pulitzer Prize-winning author of The Amazing Adventures of Kavalier & Clay, once dedicated a book to Moorcock and flew to Austin to give him a surprise introduction at an award ceremony. Shortly before her death, British literary author Angela Carter said her greatest regret was that she never sold a story to New Worlds.

Not to mention, Moorcock himself has increasingly pushed his own work into territory where genre labels no longer apply.

His Mother London, a love letter to his home city, and Behold the Man, a tale of biblical time travel, are regularly shelved as literary novels in bookstores. And ask him what work he’s proudest of and he’ll say it’s the Pyat Quartet, a series of novels attempting to unravel the racism that allowed the Holocaust to happen.

“I’ve often said the best bookstore would have no genre labels in it at all,” Moorcock said. “That’s absolutely been my aim all along: to get rid of those distinctions.”