Newest resident of Olmos Circle has some 'destination' decisions ahead 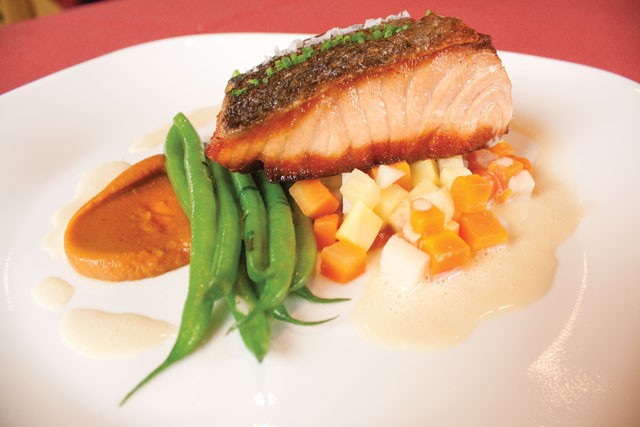 At first, I thought I'd be perfectly happy ignoring the McCullough Avenue Grill, a place that appeared on Olmos Circle almost before the body that briefly was Tangeré grew cold. Rumors of burgers, calamari, and mac and cheese (please, God, no more calamari, no more mac!) swirled about the new operation, yet another grill. (Please, God, no more grills — or grilles — either!)

But then I noticed an ad touting MAG and "American Cuisine at its Finest." And despite the fact that this did not exhibit the English language at its best, I relented. What harm could lunch do? Besides, the chef was said to have worked in New York with such lower-case gods of the restaurant pantheon as Daniel Boulud and Jean-Georges Vongerichten.

The place was empty when I arrived, not an encouraging sign, and right off the bat they were "out of" the soup, a curried and roasted parsnip, I had identified as being emblematic of a dedication to seasonal cooking. That didn't leave much for starters, the calamari and mac being out by virtue of principle. Fried mushrooms are in the same, enough-already category, but the Guinness batter caught my eye. And, lo and behold, they were good, with the mushrooms succulent, the delicate beer batter just stout enough. Two dips, a garlicky aioli and a sour cream with chipotle, were also welcome.

Lunch entrées are of the something-for-everybody sort, including two deluxe burgers, a grilled cheese, fillet and chicken schnitzel. But expectations for the pappardelle with pork and asparagus had been ratcheted up by the mushrooms, and they were mostly met: The pasta was perfectly cooked, the simple tomato sauce (perhaps luxed up by a bit of cream) was entirely appropriate and its sections of pencil-thin asparagus were still fashionably crunchy. I did have the feeling that the asparagus tips had been saved for a fancier dish, and contend that the small chunks of pork had little influence on the flavor, but overall the pasta was anything but ordinary. Which meant I'd now have to spring for dinner, too.

If MAG changed anything from the Tangeré redo of Shiraz, the building's prior occupant, it's not immediately apparent; even the tableware and serving pieces seem the same. But what's on the dinner plates has improved immensely. Though dinner starters, sadly, are the same as lunch, there is one addition: "spicy shrimp n scallops + carrots + foam." And it's a winner, starting with an exceptionally handsome presentation in which a barricade of perfect baby carrots separates the spunky shrimp, erect on an herbed oil, from the scallops cresting a carrot foam. The only thing needed was a little sea salt for the scallops, which the kitchen willingly supplied in the form of fleur de sel in a porcelain spoon. Otherwise, impeccable.

Normally I'd move on to meat from a seafood appetizer, and either a fillet or a New York strip (served with asparagus finished in fines herbs — so that's where the tips went!) could have served that purpose. But I could swear that I smelled the fresh cod cooking when I arrived, so fish it was again. Carrots again, too, which didn't bother me in the least. Pumpkin purée and sautéed spinach fill out the plate, with just a hint of unidentified white foam serving to blur the edges of the again-elegant composition. The comely chunk of cod was cooked flawlessly, but needed a little something to lift it up — perhaps the lemon caper cream that's served with the lunch version. And I could have used just a hint of chili heat in the sweet pumpkin purée to take it in a more savory direction — and yet I'm impressed with the technique and the consummate professionalism. Both were also apparent in a deeply flavored dark cherry cobbler whose topping had been artfully applied (but whose diner-pie consistency could use a little work).

I left to an empty house that Tuesday night — which meant that the chef had nothing better to do than to come out and talk. He admits that they're going through their early ups and downs but is optimistic. He claims there will soon be additions to the unconscionably ordinary wine list; it's especially egregious by-the-glass. And, of course, he'd like to see us all there. Why not; the pricing is right, the talent is there too… they just need to decide whether the place is to be a cozy neighborhood hangout or a dining destination. Glad I'm not making that decision. •

The Skinny
The menu doesn't look inspiring, but there are seasonal gems beyond burgers and mac 'n' cheese.