Newsmonger: Creative arguments on both sides of the VIA streetcar debate 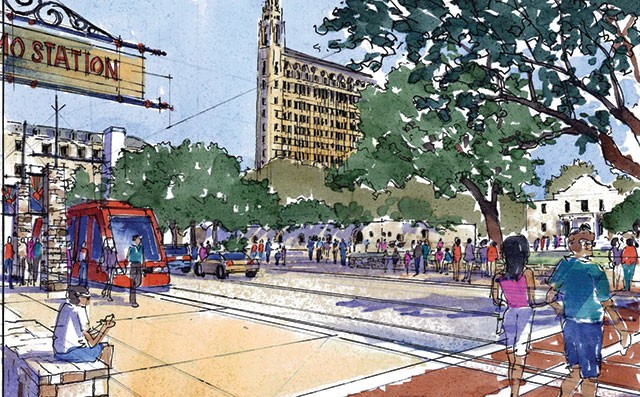 If a petition meant to derail a $280 million streetcar project in downtown San Antonio isn’t successful, two Northside city councilmembers think they have enough council support to place the issue on the November ballot.

On July 8, streetcar opponents handed in a petition to the city clerk that would amend the city charter to require a public vote before streetcar and light rail right-of-ways could be granted to VIA Metropolitan Transit. That petition, however, could be tossed out because of a technicality.

Thus far, that hasn’t seemed to deter streetcar opponents. “The council can legally call this charter election without valid signatures,” District 9 Councilman Joe Krier said. “Second, I am confident, having talked to the people who collected signatures, that they have more than 20,000 residents that signed the petition.” Krier continued, “I believe a majority of the council will not let minor imperfections and technicalities get in the way of honoring the will of 20,000 citizens.”

Krier is referencing so-called circulator signatures, which City Clerk Leticia Vacek said must be on each page of the petition and signify that the person collecting signatures verified that all of the signers on each page were San Antonio residents. Vacek has until July 28 to verify the petition signatures.

District 10 Councilman Mike Gallagher said even if the petition is thrown out, he thinks there might be one city councilmember who actually supports the streetcar plan, but who would be willing to side with the opposition and support bringing the charter amendment to a November vote.

“I think I have enough support on the council to get that done,” Gallagher said. “And the reasons for this, it’s quite logical, is whether you are for or against the project, you have to give voters a voice .… That is just so important because if you think about it, over 26,000 signatures; you know, that’s a turnout for a city election.” (During the last general election, in May 2013, 46,417 ballots were cast from a pool of 614,456 registered voters, according to a City of San Antonio General Election canvass report.)

“We have our concerns, though, that some of the backers of the petition drive to alter the San Antonio City Charter are misrepresenting the purpose and effect of the petition,” the transportation agency said in a released statement responding to the petition. “We think they are misinforming the public regarding the modern street car [sic] project, but we will continue to share the facts and provide accurate information on the street car project, and we will stay focused on making sure the transportation needs of this great city are met.” Also noted in the release was this: “The street car project is just one component of a larger transportation system being realized through the SmartMove plan, but it is certainly an essential part of that plan.”

That plan, circa 2011, is a Long Range Comprehensive Transportation Plan that looks decades ahead and includes light rail and streetcars as integral aspects of San Antonio’s transportation future. As a side note, the plan mentions that San Antonio was the first major city to get rid of its streetcar system in 1933 after leaders determined buses were cheaper and moved more people faster.

“In the year 2035, the Long Range Comprehensive Transportation Plan (LRCTP) … envisions 39 miles of light rail, 5 miles of street car, 57 miles of bus rapid transit and an expanded base network of regular fixed route bus service, transit centers and park and ride facilities,” the plan authors note in the executive summary. As for streetcar, according to the plan, it would be a cheaper alternative to light rail and could serve as a downtown circulator.

Opposition and support of the Downtown streetcar plan can be summed up in a tale of two studies, one commissioned by VIA Metropolitan Transit in 2011 that was updated last month and another written by Randal O’ Toole, who is a senior fellow at the Cato Institute, which was published by The Heartland Institute in 2012. Both the Cato and Heartland institutes are recognized as Libertarian think tanks.

The study VIA Metropolitan Transit commissioned from the SABER Institute looks at the economic impact of three scenarios: no-build, baseline and accelerated scenarios. The SABER Institute is an economic think tank that is the product of an alliance between St. Mary’s University and the San Antonio Hispanic Chamber of Commerce.

O’Toole’s report, however, claims that the study commissioned by VIA Metropolitan Transit fails because it attributes economic development in the Downtown impact area to a streetcar when the real catalyst for development is government subsidies and tax breaks. O’Toole also claims that buses are more economical and move more people, among other arguments.

“Streetcar advocates who think new streetcar lines will be anything other than a subsidy to contractors and a few property owners (who will also benefit from other TIF [Tax Increment Finance] subsidies) are fooling themselves. Slow speeds, limited numbers of seats and inflexibility make streetcars inferior to buses in every respect except in their ability to consume large amounts of tax payer money,” O’Toole wrote.

While using different language than O’Toole, VIA’s updated economic impact in a roundabout way acknowledges that much of the development that would ensue would be in places that are already attractive to business.

“For at least the near-term, much of the development activity can be expected to occur close to the streetcar alignment and in places that are already proving attractive to private and public investment,” the SABER study notes.

Additionally, traffic jams and streetcar construction near bustling businesses could hurt existing progress, according to Gallagher.

“One of the things that I am really concerned about would be the small businesses along that route. They would probably be destroyed while this thing is being constructed. And the reason I say that is I’ve received a few utility briefings that said some lines will have to be moved from underneath the rails,” Gallagher said. “The process of moving utilities and putting rail down really does take a long time and it’s extremely expensive. It keeps roads torn up and small merchants lose customers.”

In other areas of the city where there are long-term construction projects, like the 18-month-long work on Broadway and Hildebrand, some business owners have complained about the inconveniences. In early July, businessman Red McCombs told the San Antonio Express-News that the Broadway-and-Hildebrand project was a “case study” on how cities should not run construction projects.

VIA Metropolitan Transit Senior Vice President of Public Engagement Charles Gonzalez said the transportation agency is proactively meeting with business owners in and around the area where the first phase of the streetcar, which includes about three miles of rail, will be built. Gonzalez said VIA will work with consulting firms and business departments in local universities to assist affected businesses with getting the word out that they are open for business.

“It’s the end product that you’re looking at. There will be inconvenience and we don’t want businesses to suffer to a point that they don’t recover, and we don’t anticipate that,” Gonzalez said. “But once that line is built, every experience in every other city shows those businesses improve, property value goes up, business is enhanced, there is new business, new visitors and more people living in that area.

“So we are hoping the sacrifice and inconvenience that they may experience, that they will benefit and be rewarded by the modern streetcar system we’re going to construct,” Gonzalez said.

And while both Gallagher and Krier have expressed their dissatisfaction with the streetcar plan to multiple media outlets and to constituents and worked with grassroots organizations to drive up opposition against the plan, they’ve also received criticisms accusing them of being against the streetcar plan because it is in Downtown.

For now, all eyes are on the city clerk’s office as supporters and opponents wait and see whether the petition will successfully bring a city charter amendment to the ballot in November, regardless of whether a state law would trump that amendment and allow VIA Metropolitan Transit to continue its streetcar plans.