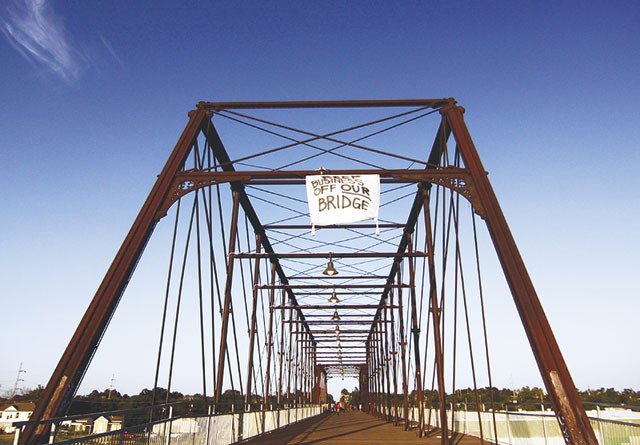 A group of local activists and East Side residents continue to fight the city-approved deal to build a microbrewery next to the Hays Street Bridge, filing a lawsuit in Bexar County Court last week.

This summer Council unanimously approved Alamo Beer Co.'s plan to build a microbrewery on the east end of the Hays Street Bridge, despite protest from members of the Hays Street Restoration Group, whose years-long efforts saved the bridge. After years of decay Hays was closed to traffic in 1982, then considered for demolition in 1994. The Restoration Group raised money, gathered design and reconstruction estimates for the city, and by 2001 helped the city secure a $2.89 million federal Transportation Equity Act grant, administered through TxDOT, to rebuild Hays.

As sponsor of the grant, COSA had an obligation to pitch in 20 percent of the grant's total, but didn't want the liability. The city inked a contract putting the burden on the Restoration Group to raise cash to fulfill the city's obligations. In exchange, the city promised whatever assets raised or donated to the city – like land – would only be used for the Hays Street Bridge Restoration Project.

Amy Kastely, a St. Mary's University law professor and attorney representing the group, insists that project always included plans for a park adjacent to the bridge. "A park was always included whenever they said Hays Street Restoration Project," she said.

The land the city turned over to Alamo Beer in August was donated by beer distributor BudCo in 2007 with the express intent of turning it into a park, according to correspondence from the company in 2006 – although BudCo donated the land no-strings-attached, legally speaking.

In its lawsuit filed Thursday the Restoration Group claims the city unlawfully disregarded a petition with 2,800 signatures calling for a city-wide vote on the land COSA sold to Alamo Beer. They cited a state law calling for such elections whenever a city auctions off a public square or park; COSA, meanwhile, rejects the claim saying the parcel was never officially considered park land. The Restoration Group hopes to score a temporary injunction to keep Alamo Beer's plans from moving forward.

Stuck in the middle, of course, is the future of the planned East Side brewery, which, according to hours of testimony at numerous public meetings this summer, much of the public and surrounding community really does want. Under the deal Council approved this summer, Alamo Beer gets to oversee the land under Hays and approval to build a skyway connecting the multi million dollar project to the bridge. The plan also lets Alamo Beer set up tables and chairs on a 1,190-square-foot slab of the bridge deck at no leasing cost for a decade.

Therein lies another complication. According to a letter the Federal Highway Administration sent TxDOT in September, any agreement letting Alamo Beer use portions of the bridge could jeopardize that $2.89 million the feds forked over for the bridge's reconstruction costs.

"[W]e cannot endorse the use of a [Transportation Enhancement] funded facility to benefit a private development which will reduce the original scope and intent of the project," the letter reads. "If the City and TxDOT chooses to allow a private benefactor access and use of the facility, the Federal funding used toward the completion of this project should be returned."

Lori Houston with the Center City Development Office said the city is still in talks with TxDOT and the feds and has yet to finalize the lease agreement.

In early August, Stephanie gave extensive, recorded recantations to lawyers with the Innocence Project of Texas and to Austin-based documentary filmmaker Deborah Esquenazi, claiming her father forced her to repeat false accusations of having been savagely molested by her aunt and three friends when she was just 7-years-old. After calling her father, Javier Limon, an "evil monster," the woman told Esquenazi on camera she expected payback from her father for coming clean. "Either by physical abuse, or by getting my children taken away," she said.

Both Stephanie's mother, Rosemary Camarillo, and her Houston attorney Casie Gotro told the Current last month Stephanie has faced intense retaliation from her father since recanting her claims of abuse. Last week Limon took the stand against his daughter during a child custody battle in a Houston court.

While complaints to Child Protective Services are anonymous, an affidavit in the case filed by a CPS caseworker outlines allegations against Stephanie and her husband stemming from an altercation with Limon around the time of Stephanie's recantation to Esquenazi and the Innocence Project of Texas. In October CPS was given emergency custody of Stephanie's three children.

Stephanie's recantation was a critical break-thru in the ongoing efforts to exonerate her aunt, Elizabeth Ramirez, and her three friends, whom advocates have come to call the San Antonio Four. Ramirez and friends Cassandra Rivera, Anna Vasquez, and Kristie Mayhugh were convicted in 1997 and 1998 on charges they brutally molested Stephanie and her older sister during a weeklong visit to Ramirez's apartment in 1994. All four women have maintained their innocence, and experts who have reviewed the case have called the forensics used to convict the women deeply flawed. All except Vasquez, who was paroled last month, remain in prison.

At her 1997 trial, Rivera speculated Limon forced his daughters to lie because she turned down his advances and a marriage proposal.

The E-N's Michelle Mondo (the first reporter to critically examine the San Antonio Four's innocence claims in 2010) reported that Limon in court last week accused his daughter and her husband of domestic violence and endangering their children. Stephanie then accused Limon of abusing her as a teenager, including an instance where Limon allegedly hit her over the head with a piece of lumber. Finding no evidence to back Limon's allegations, a judge gave Stephanie and her husband their children back after Friday's court hearing.

Mike Ware, the attorney handling the exoneration case for the Innocence Project of Texas, attended Friday's hearing. He insists Stephanie's custody battle has no direct bearing on the exoneration case, saying, "The four women I represent have nothing to do with this family drama, although they were victims of it back when the false accusations were made."

Ware added: "I am not surprised that Stephanie was able to prevail agains the accusations made against her by her father, simply because his accusations against her appeared to be so patently false."

A review panel has recommended the University of Texas withdraw its highly-publicized study saying fracking isn't tied to groundwater contamination.

The study released early this year by UT's Energy Institute declared that there was little to no evidence of a direct connection between groundwater contamination and fracking, the process of shooting water, sand, and chemicals deep underground to break up natural gas-bearing shale formations.

UT's Energy Institute endured a serious black eye this summer when the Buffalo-based Public Accountability Initiative, a corporate and academic watchdog group, discovered that lead report author Chip Groat failed to disclose his lucrative ties to oil and gas. SEC filings show that as a board member with Houston-based oil and gas drillers Plains Exploration and Production (PXP) – a company with a serious interest in fracking – Groat since 2006 has received more over $400,000 in cash payouts and over $1.3 million in company stock. In 2011,

The review panel found Groat was guilty of "very poor judgment coupled with inattentiveness to the challenges of conducting research in an environment inevitably fraught with conflict of interest concerns."

Though there's no evidence Groat intentionally misrepresented any of the study's findings, reviewers also noted the report's summary and accompanying press release were "inappropriately selective," painting a more glowing, industry-friendly picture than the more nuanced findings of the 400-plus page report: that while there may not be a direct link between fracturing shale and groundwater contamination, researchers still cited a number of other steps in the process that could put groundwater at risk, like surface spills of toxic flow-back or well blowouts.

Perhaps most importantly, the reviewers criticized that much of the report, titled a "Fact-Based Regulation for Environmental Protection in Shale Gas Development," only drew from literature surveys, incident reports, and conjecture, adding, "It should be stressed that the term 'fact-based' would not apply to such analysis" since little by way of scientific data was presented in the first place.

Both Groat and Energy Institute director Raymond Orbach have resigned from their posts.