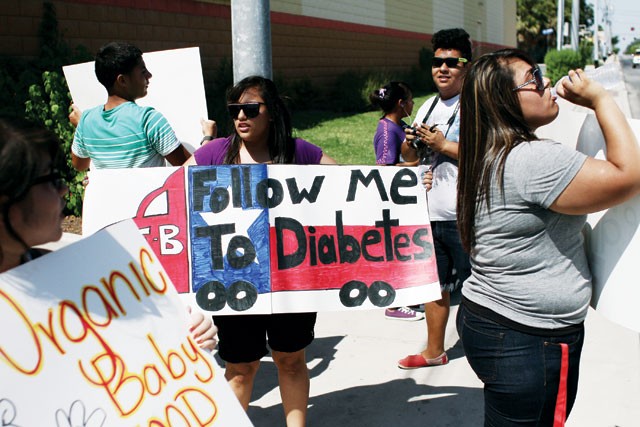 About a dozen teenagers and organizers with Southwest Workers Union protested outside an Eastside H-E-B on the corner of Houston and New Braunfels last week, saying they spent over a year surveying food at H-E-B stores, finding major discrepancies in produce quality and healthy food options at stores in economically depressed areas compared to wealthier parts of San Antonio. More at: rootsofchangecoop.org/hebpetition.

Public to vote on Brainpower

Mayor Julián Castro got caught in an insidery, pundit-driven whirlwind of hype two weeks back when the Democratic National Committee tapped him to give the closely watched keynote at the party's upcoming convention. Swatting away speculation over his political future, and to what heights the keynote might launch his career, Castro had more important things to discuss when the Texas Tribune came calling: "San Antonio's long-term challenge is to create a well-educated workforce," he said, "and we need to start early." San Antonio voters in November will get the chance to either bless or stall Castro's vision to boost educational attainment in the city. In a long-awaited vote, Council last week unanimously approved putting Castro's proposal to max out SA's sales tax, an increase of one-eighth-cent to the state maximum of 8.25 percent to fund an ambitious program boosting local access to full-day pre-K, on the November ballot.

Council's three Northside and predictably conservative members — Reed Williams, Elisa Chan, and Carlton Soules — voted to put the measure up for voter approval, despite stated reservations, although in a symbolic gesture of disapproval each voted against a resolution to create the municipal body the city needs to channel the new tax proceeds toward Castro's initiative, dubbed Pre-K 4 SA. Castro has now passed a critical hurdle in a plan upon which he's staked his entire mayoral tenure. With some of the biggest support coming from the business community itself, Castro tapped H-E-B chairman and CEO Charles Butt and USAA President and CEO Joe Robles to sit on the Brainpower Taskforce that studied and eventually recommended the pre-K program. In addition, Castro got an overwhelming blessing from educators and former mayors who turned out in council chambers last week to laud the project.

Tessa Pollack, president of Our Lady of the Lake University, said recent census data showing San Antonio ranks near the bottom of the country's top 50 cities in education attainment, along with a new Pew Research Center data showing San Antonio's one of the most economically segregated cities in the country, have provided "multiple whacks on the side of the head." The plan, she said would "academically ground children in every quadrant of San Antonio." If authorized by voters for its initial eight-year run, Pre-K 4 SA would generate about $30 million in additional sales tax revenue for the city annually, helping shuffle a total of 22,400 4-year-olds into full-day pre-K. The annual cost to the median household in SA is estimated at $7.81.

Castro got a dose of opposition from two former council members last week, both Republicans, Bexar County Commissioner Kevin Wolff and state Rep. Lyle Larson, who argued the city doesn't have clear authority to dip its foot into education policy. In their letter to Castro, Wolff and Larson argued any increase in sales tax revenue should be spent on core city functions, like increased police or boosting funding to VIA. "Should the city be in the business of education? My opinion's no, but not because I'm making a harsh judgment on pre-K," Wolff told the Current last week.

The State of Texas currently covers half-day pre-K for children from low-income, English-as-a-second-language, military, and foster families. Many districts in the past were able to offer full-day programs with the help of state grant funding. Those grants, however, were gutted by the Legislature last session when lawmakers passed historic, deep cuts to education funding. Castro and others have argued the city needs to step in to cover the losses, and San Antonio's plan would be the first city-level effort in Texas to ensure full-day pre-K. "Here in San Antonio we have an opportunity to control our own destiny," Castro said before last week's vote. "We can't wait for Washington and Austin to ensure our young minds are well developed."

"Look, I will absolutely fault the Legislature for not doing it (education) correctly, but I'm not sure the best strategy is to create something new rather than fix the system that's broken," Wolff insisted last week.

At the dais, Councilman Soules went so far as to say, "I'm not sure the situation is as dire as it's made out to be."

It's notable that Wolff paired with Larson to pen the letter to Castro — Larson, like most of his GOP colleagues, voted for the deep education cuts last round at the Lege. "I get that point," Wolff said. "But having him (Larson) sign that letter, from my perspective, puts him under even more pressure to fix what he knows as well as I do is broken." Larson failed to return calls for comment last week.

Now it's up to the citizens of San Antonio to decide whether it's the city's job to dive headfirst into education. Castro's already begun his full-court press to see the measure pass. In an Express-News op-ed Monday, Castro delivered what's sure to be the first of many appeals to SA voters. "The research is unequivocal," he wrote. "If we are going to change the educational trajectory of our young people, you get the most return on investment by starting early, before a child falls behind, rather than trying to catch them up later. … There will be those who focus on the word 'tax,' a four-letter word in today's lexicon. But the greatest cost to taxpayers would be to do nothing."

Turning over management of a state psychiatric hospital to a private-prison subsidiary, what could go wrong? Plenty, says a coalition of over a dozen state and local civil rights, mental health, public policy, and faith-based groups who are pushing for the Texas Department of State Health Services, Gov. Rick Perry, and the Legislative Budget Board to quash a bid by GEO Care, a wing of private-prison giant GEO Group, to run one of DSHS's state hospitals. GEO was the only company that responded to the DSHS request as the department preps to privatize one of its state hospitals, the notion being that a private contractor can operate at 10 percent below current costs and save the state millions annually.

GEO's history in Texas is sketchy. State officials shuttered the GEO-run Coke County Juvenile Justice Center in 2007 amid reports of squalid conditions, sexual abuse, and youth suicide. In 2009, inmates at the GEO-run Reeves County Detention Center rioted for better treatment and medical care after an epileptic inmate seized and died in an isolation cell — lawyers with the inmate's family say his death was easily preventable.

Troubles for GEO in Texas have only continued this year. Last month the Austin American-Statesman reported that Texas has fined GEO Care $53,000 for serious lapses in patient care at its psychiatric hospital in Montgomery County. In reviews of the facility, DSHS's state hospital division noted serious injuries and incidents that were never reported to the state — like one inmate who seriously harmed himself before eating fecal matter. Classes designed to rehabilitate patients at the facility were described as "bedlam" in the reports, and the DSHS review notes the case of one patient who, while in seclusion for four hours, banged his head on the cell window that caused lacerations to both eyes and bruising to his head. Staff at the facility even required a patient to clean up his own urine and feces.