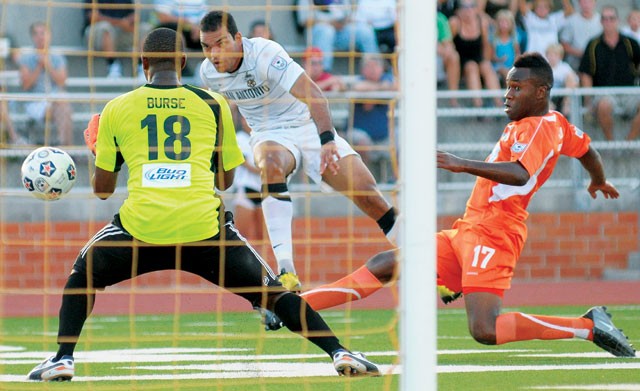 "It's bullshit."
— Darren E. Sherkat, Southern Illinois University at Carbondale professor, speaking to the Chronicle of Higher Education about UT Austin prof Mark Regnerus' highly controversial study challenging the parenting abilities of same-sex couples. Look for a more particular takedown of Regnerus' work by Sherkat in an upcoming issue of the journal Social Science Research. Catch a Q&A with Sherkat later in the week at sacurrent.com .

Commanders last week added three to the list of military training instructors, or MTIs, under investigation for sexual misconduct with trainees at Joint Base San Antonio-Lackland, bringing the number of instructors investigated for, charged with, or convicted of sexual misconduct ranging from harassment to assault and rape to 15. The number exceeds those tagged during the investigation into the Army's Aberdeen Proving Ground in the 1990s, one of the military's most notorious sex scandals. "Unfortunately, we've always suspected that this was just the tip of the iceberg," said Nancy Parrish, founder of Protect Our Defenders, a group supporting sexual assault victims in the military, in an email last week. Parrish and other advocates have been pushing, so far unsuccessfully, for the House Armed Services Committee to hold public hearings on the scandal. Advocates like Parrish point to Lackland as a symptom of a growing cancer within the military. According to the Pentagon, last year only 15 percent of an estimated 19,000 victims of military sexual assault came forward. "We cannot let the Lackland scandal become yet another asterisk in government's long history of failing to fix our broken military system," Parrish said.

In the first major Lackland case to head to court-martial, last month former trainer Luis A. Walker was sentenced to 20 years in prison after being found guilty on seven charges of misconduct, including rape. While he had faced a maximum of life without parole, he'll instead be eligible for release after serving just six years.

Air Education and Training Command officials would not identify the three new instructors under investigation nor would they give any details of the allegations against them, saying only that the new cases bring the total number of victims in the base's ongoing scandal to 38. Tech. Sgt. Christopher Smith, set to go on trial this week, faces up to a year in jail on charges of sexual contact with trainees and obstruction of justice. Three other trainers are set to face courts-martial in September and October.

When Adoption Services Associates suddenly closed its doors this year, families from across the country relying on the San Antonio agency were out the tens of thousands of dollars paid in fees for adoptions that would never pan out. In two lawsuits filed last week against owners Linda M. Zuflacht and husband James M. McMahon Jr., the Texas Attorney General's office claims ASA took thousands from clients without ever revealing it was on the verge of closing, a violation of the Deceptive Trade Practices Act. In operation since 1985, the agency had some 30 or 40 clients from across the country fearing they'd never recoup their money after it closed in early April. Some had waited over a year for a child and already made multiple payments.

In an affidavit filed in a Bexar County court, one New York couple said they first contacted ASA in November 2010. The family eventually paid $13,600 in administrative fees to become a prospective family with the agency. Just three weeks later, the couple learned the New York State Office of Children and Family Services ASA was no longer authorized to do business in the state for failing to file paperwork for several years. ASA asked the couple for an additional $21,400 less than a month before McMahon sent out an April 5 email to clients saying the business would close, citing "economic concerns."

Another court document mentions a Virginia couple who paid ASA more than $26,000. When an adoption scheduled for January 2012 failed after the birth mother backed out, the family spoke to an ASA social worker who agreed to help them find another child. Two weeks later, McMahon sent out the email announcing ASA's closure.

On July 10, well after court records show the AG's office had already begun taking sworn affidavits from ASA clients in the case against the agency, Zulfacht urged former ASA clients to donate money to "help us repay these people who were so harmed by our closing." In the same Facebook post, she blamed the agency's closure on a litany of problems, including the "economy, the competition, the 'morning after pills,' the acceptance of unwed mothers," and "improved infertility treatments."

When UT professor Charles "Chip" Groat and his team presented preliminary findings of their independent report on fracking last November — stating that the process of shooting chemically charged water deep underground to break up oil and gas rich shale (like South Texas' own Eagle Ford), isn't directly linked to groundwater contamination — headline writers across the state had a field day. The dailies reacted with similar vigor when the group released a final version of the report in February (complete with simplified press release heralding: "New Study Shows No Evidence of Groundwater Contamination from Hydraulic Fracturing") and headline skimmers around the state surely have since exonerated the practice. The findings of the 400-plus page report were, of course, much more involved. While Groat's team found no direct link between fracking and water contamination (unlike an EPA study of Wyoming happenings), they cited numerous kinks in the process, like surface spills of toxic flow-back or well blowouts that could put groundwater at risk.

Now the Buffalo-based Public Accountability Initiative blames Groat's rosy assessment on his major stake in oil and gas. In a report last week, PAI outlined how Groat has sat on the board of directors for Houston-based oil and gas drillers Plains Exploration and Production (PXP) since 2006. Among the things Groat didn't disclose in his report or to UT officials: he's since banked over $400,000 in cash payouts and over $1.3 million in stock options from PXP; in 2011 Groat's PXP compensation, a mix of cash and stock, hit $413,900 — more than double his 2012 UT salary of $173,000. Groat's total PXP stock holdings are valued at around $1.6 million.

"Why would industry pay for a study when they're already paying the lead author of the report?" asked PAI's Kevin Connor. "There was an extreme disconnect between the content of that report and the press release, which was picked up far and wide. It highlighted this very industry-friendly message, and it was clearly led by a gas industry insider."

Groat told the Current via email last week he only organized UT's report, coordinated research, and published the results, and had no influence on findings. "Clearly there are those who would like to use this connection to discredit the study and there is nothing I can do or say to diminish the perception they are fostering," he wrote. "The Public Accountability Initiative report takes great liberties with interpreting information in ways that build their impugning of our report." Why wouldn't Groat disclose the ties from the start? "Since I knew I would not influence the results I didn't feel it was relevant." Right.

Back from its month-long break, SA City Council's got a full plate this week. Members will hear in detail Mayor Julián Castro's "Brainpower Initiative," re-dubbed "Pre-K 4 SA" for Wednesday's B Session discussion, which proposes a 1/8 cent increase to max out SA's sales tax in order to fund expanded access to pre kindergarten across the city. Thursday, Council's set to consider selling surplus city land to Alamo Beer Co. for a microbrewery on the east end of the Hays Street Bridge, including a package of incentives valued at nearly $800,000 for the contested project.