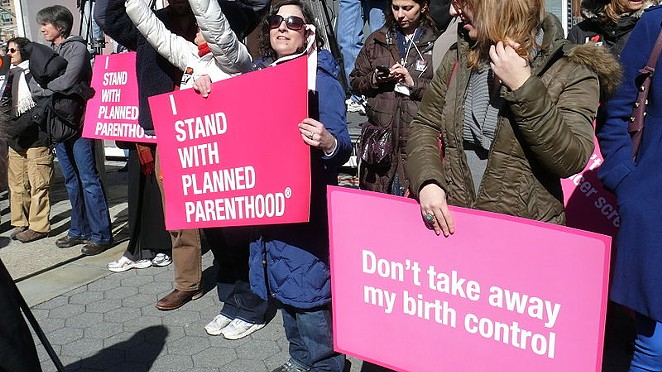 Leadership in the Lone Star State continued its assault on women last week by axing Medicaid funding for Planned Parenthood and serving abortion clinics in San Antonio, Dallas and Houston with subpoenas.

Texas Health and Human Services Commission investigators delivered the subpoenas last Thursday, but as of deadline, refused to explain why.

Despite the state's refusal to explain itself, reading between the lines here isn't hard.

Remember the heavily doctored videos Abbott is referring to? The ones that accuse Planned Parenthood of harvesting babies for profit? You know, those videos that wouldn't even stand up in a court of law?

Well, Planned Parenthood in Texas has never participated in the donation program, which despite Abbott's "harvesting" assertions, actually fuels research in vaccine development.

So maybe the anti-vaccine camp is really behind the assault on Planned Parenthood? Nope, just Texas' extremist leaders.

Despite the fact that immigration is at an all-time low in the United States — and that Americans claim to be humane and empathetic — the federal government still feels compelled to jail entire families who cross the border illegally.

Immigration and Customs Enforcement (ICE) has two "family-detention" jails in Texas, one in Karnes County and another in Dilley, that imprison nearly 2,000 immigrant families, according to the San Antonio Express-News.

These are asylum seekers, many of whom rode La Bestia — a train from Central America to the border — to escape rampant and bloody gang violence. The families then cross the Rio Grande and turn themselves Border Patrol.

However, and this shouldn't be hard to believe, a federal judge in California ruled that ICE is violating the Flores Agreement — a 1997 settlement that set national standards for the detention, release and treatment of all children in federal custody. Basically, kids can't be kept in a jail and must be released without unnecessary delay.

For one, it's actually trying — and is close — to getting licensed by the Texas Department of Family and Protective Services so it can legally hold children.

The federal government also shipped five to seven families out of the state to circumvent that California judge's order about adhering to the Flores Agreement, RAICES, an immigrant advocacy organization, reported.

Welcome to the Jungle

Megacorporation Amazon announced last week that it will provide one-hour delivery in San Antonio on "tens of thousands of daily essentials through a mobile app."

This can be anything from paper towels to ice cream — or whatever.

We're the 17th metropolitan market in the entire world, according to a press release, where delivery through the app, Prime Now, is available.

"Amazon has four fulfillment centers in the state of Texas, employing thousands of individuals in full-time jobs, and has established four Prime Now hubs to fuel superfast delivery in the state," according to a press release.

This is code for we're gonna hire lots and lots of cheap labor and run them into the ground at our warehouses — a constant subject of investigative journalism.

So before you hop on the Prime Now bandwagon, consider that criticism before throwing money at Amazon because you want macaroni and cheese and sparkling water delivered to your doorstep.