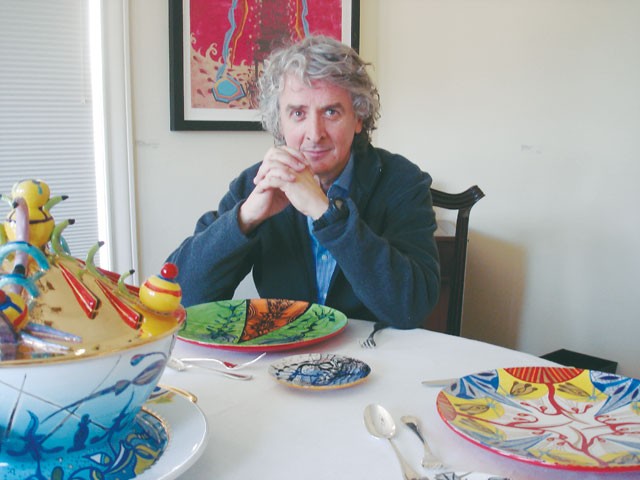 Nicolás Leiva dreamed of paradise, a realm of angels and celestial beings who fed and nurtured him. "Now," he says, "I return every day since." Leiva accomplishes this amazing journey through his art practice, explaining that, "It is a street that takes you to the mystic elevation. You pray, you work. It is the same." A solo exhibition of Leiva's ecstatic vision is now on view at Ruiz-Healy Art through January.

Lustrous majolica, painting on fabric, tinwork, and carved marble fill the rooms of the gallery sited in an Alamo Heights home; a large inflatable sculpture hovers a dozen feet high in the backyard. Fantastic flower-like forms, towering columns, disks and orbs are emblazoned with intricate surface designs, swathes of bright color, and gleaming gold. This is eye candy of the sweetest kind, but it brims with story.

A dining table is set up in a back room, complete with brightly colored majolica plates, silver, and a sumptuous enameled and gilt tureen. Leiva describes the scene: "Maybe? I don't know. This is where, maybe, the people in paradise eat." Two large disks hang on the wall inscribed with floral devices. In the center of each design is a fantastic hybrid: part boat, part airplane, with a mermaid's tail. What appears to be a decorated plate is, Leiva insists, "a parabola, a transport to the God." Abstracted flowers shimmering with gold are the weapons of the guardians of paradise. The guardian himself is portrayed as a gilded head with mysterious appendages. A serigraph depicts a house on stilts above water; rays descend from above. Leiva explains that they are "the blessing of God to the house." The structure in the middle is the heart of the house, its sexuality. Below the house are small boats. From each emerges a hand marked with a peering eye. These are, Leiva says, "the memories of the house." Though similar to the emblem known as the hand of Fatima, these seeing-palms do not commemorate the prophet Muhammad's daughter, but the Virgin Mary, of whom Leiva is a devotee. Spiky columns and globes in the front room commemorate the seven days of creation. Leiva demonstrates with his hand how being was pulled from nothingness.

In 2005 Leiva was diagnosed with life threatening skin cancer. He had his first vision at that time while painting the series, "Las naves para ir a ver a dios" (The ships to go see God). When he was pronounced cured in 2006, he began his present series about the paradisaical realm.

Born in Tucumán in northwest Argentina in 1958, Leiva made paintings until 1996, when he extended his practice to ceramics. Now, he works in an assortment of materials and divides his time between his studio in Miami and the workshops of Bottega Gatti in Faenze, Italy. Working alongside other craftsmen, it takes Leiva and his team over two weeks to fabricate a single ceramic piece, which enters the kiln seven or eight times as the process of making the gleaming polychrome majolica finish takes place. On the last firing, the gold is applied.

The resultant works of art are unabashedly pleasing to the eye. That his work courts dismissal as decorative art does not bother Leiva. On the contrary, he insists that, "Pleasure is important. The pleasure is the point." His artworks are, like ornate Baroque altars embellished with gold or Buddhist mandalas, designed to capture the viewer's attention. They are machines of contemplation.

Embedded in Leiva's collection of forms and surface designs is a symbolic language that contains the narrative of an ethereal realm, but underlying his tales of paradise is a very real physical practice that is social, as well. Two gilt hands are part of the exhibition. Cast from the hands of a man and a woman at Bottega Gatti, they are Leiva's homage to the Italian craftsmen that work with him. The artists' labor transforms material into art. And when the art is seen, metaphor is collapsed into presence.

But, is Leiva's art successful without hearing the libretto of his private mythology? Does it work? The story he tells of his impetus to create is private, a hermeneutic. Without the story, viewing his work is like gazing at William Blake's engravings without reading the accompanying poetry. Like Blake, Leiva has great power. Even with the door partially open, the light cast is blinding.•