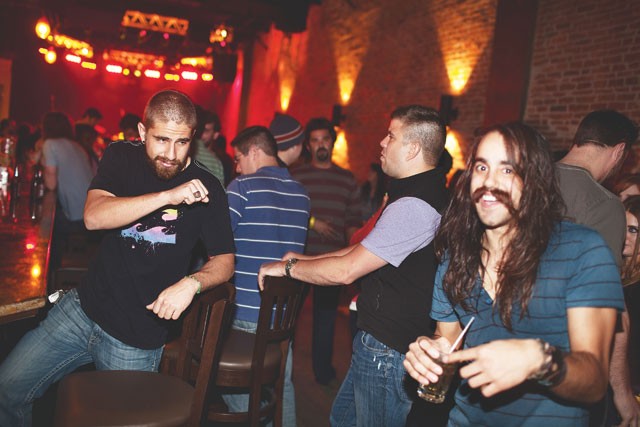 From the parking lot, 502 Bar, wedged between Fast Eddie’s and a regular’s drinking post called Oasis, looks like a just another strip-center pub. Yet there’s supposed to be an established Austin band in here tonight. That bland numerical name? The amount of beers they have in stock? A nod to the dawn of the Middle Ages? As I double-check the flyer to make sure that I’m at the right place, I notice the address in the corner: 502 Embassy Oaks. The revelation does nothing to quell the growing feeling that I am about to be sucked into another humdrum concrete room with a couple of dartboards and a battered pool table.

Upon entering I notice the stage in the back corner where the band, The Bright Light Social Hour, is going through their final tune-ups. The décor is upscale, but this isn’t the typical gaggle of Northside meatheads scoping cosmo-swilling ladies. Instead the crowd waits with measured anticipation for the music.

Speakers line the upper walls from the stage to the entrance. An enclosed sound booth houses an impressive board rivaled only by the professional setup of stage lights. Event booker Deric Wynne is going over last minute tweaks with the sound engineer. “I feel like San Antonio needs to be more unified. Last year I went to 19 concerts between October and December in Austin. I don’t see why that can’t happen here,” says the SA native.

I sidle up to the bar and the bartender fixes up a house shot, slyly asking if I remember Big League Chew. I down the drink and for a split second I’m an 8-year-old again with dusty fingers and a cheek full of bubble chaw. I thank my personal Mr. Wonka (aka Jim Meek, 502’s bartender and GM) and slip into the crowd for the show.

The Bright Light Social Hour starts with a bang of Zeppelin-esque bravado and immediately faithful fans are mouthing lyrics and rocking in sequence. The entire room is mesmerized, myself included. I am taken aback by the sound. No instrument is drowning the other out; every keystroke and every verse is as crisp as the bass drum is deep. The band’s frenzied elements of prog, funk, and ’70s rock whip up a cyclone that engulfs the room. As the show surges along, the band transforms this unremarkable strip mall station — just doors away from a bingo hall and a pottery shop — into a 10,000-capacity arena. And with that it becomes clear that 502 is not just a bar with a stage: 502 is a venue.

In true arena-rock style, the Social Hour’s encore winds down after 20 minutes with an audience left wanting more, as much a credit to the 502’s setup as the band. As the elated crowd files out and poses for pictures with the band and I can’t help but mentally list the bands I’d love to see on this stage. If tonight is any indication, 502 could be the beginning of a new live-music love affair in an area more conditioned to cover bands. Now it’s just a matter of will San Antonio notice? Just keep an eye out for those glowing numerals. •

Best Use Anytime live music is onstage; typically no cover during the week, while weekend covers stay under $10