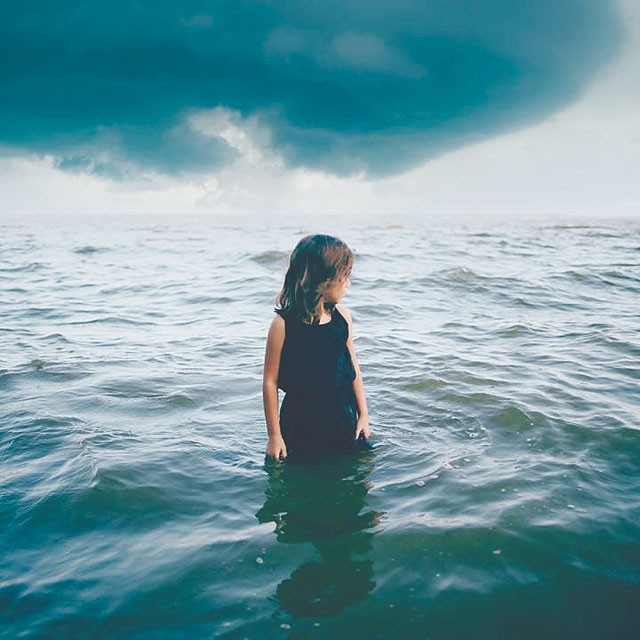 Photographer Niki Aguirre swears she had no premonition of Superstorm Sandy hitting the East Coast when she took a photo of her young niece standing in the dark waters of the Potomac River looking at the ominous sky behind her. Two weeks prior to the hurricane, the photo, which Aguirre titled "Quiet Before the Storm," was announced as one of 91 winners of Project Imaginat10n, a photography contest sponsored by Canon and Academy Award-winning filmmaker Ron Howard (A Beautiful Mind).

"I didn't know a storm was coming," said Aguirre, who had traveled back to San Antonio for a few weeks and left her husband at home in Woodbridge, Va., when Sandy made landfall. "I felt really bad I wasn't with him, especially because it was a sunny day in San Antonio." A recent Washington D.C.-area implant, Aguirre graduated from Reagan High School in 2002 and earned her degree in biology from UTSA in 2008. Not long ago, she recognized how much she uses science and the environment as themes in her photos.

"I love weather and how daunting it can be," Aguirre said. "I didn't even realize it was my natural inclination to go that direction until people started pointing it out to me. If I had the courage, I probably would've become a storm chaser."

Instead of dodging tornadoes, Aguirre is now a full-time photographer. Her winning photo, which was shot on a Canon 5D Mark II, will be used as inspiration for one of 10 films made by guest directors, including actors Jamie Foxx and Eva Longoria. The films will screen at a special festival next year.

Aguirre hopes whichever director chooses her photo will take the image literally. "I would be so excited if they created a scene in their film that looked exactly like my photo," Aguirre said. "I really hope they capture the 'controlled chaos.'"