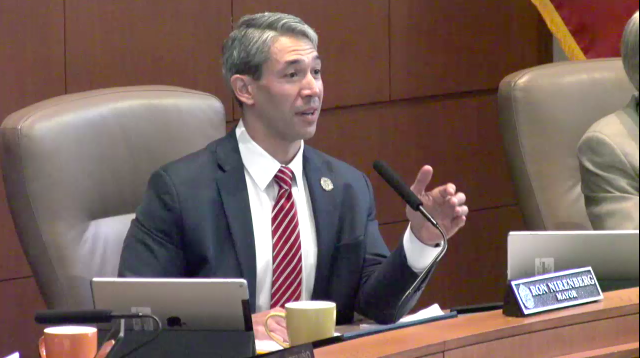 During a one-on-one interview, Nirenberg said the city's economic growth and efforts by city leaders would lead the football league planting a franchise here in the short term.

“I really believe the momentum that San Antonio has experienced over the last few years," Nirenberg said. "Most recently with the announcement of major jobs coming to Brooks City Base as well as the downtown UTSA campus and the rise of Texas A&M, the community college districts as well, you will see an NFL team in San Antonio in the next 10 years.”

Earlier this year, upstart league the Alliance of American Football made S.A. one of its inaugural markets, although the city didn't put up cash to land the deal. Local leaders have also courted the Oakland Raiders, and speculation has swirled that it might do the same for the struggling Los Angeles Chargers.

Nirenberg wouldn't speculate on whether committing to a new stadium would be a key to landing a team. Instead, he pointed to the potential use of the Alamodome, which hosted the New Orleans Saints after Hurricane Katrina.

“(One) of the great features and one of the great strengths is that we have a publicly owned stadium, a facility that is ready for almost any professional sports event under the sun," the mayor said.

However, the interview didn't touch on what may end up being one of the biggest impediments to S.A. pulling a franchise — how willing powerful team owners Jerry Jones of the Dallas Cowboys and Bob McNair of the Houston Texans are to split the state into a three-way market.