NO GREEK! The limiting factor of Greek life: power drinking 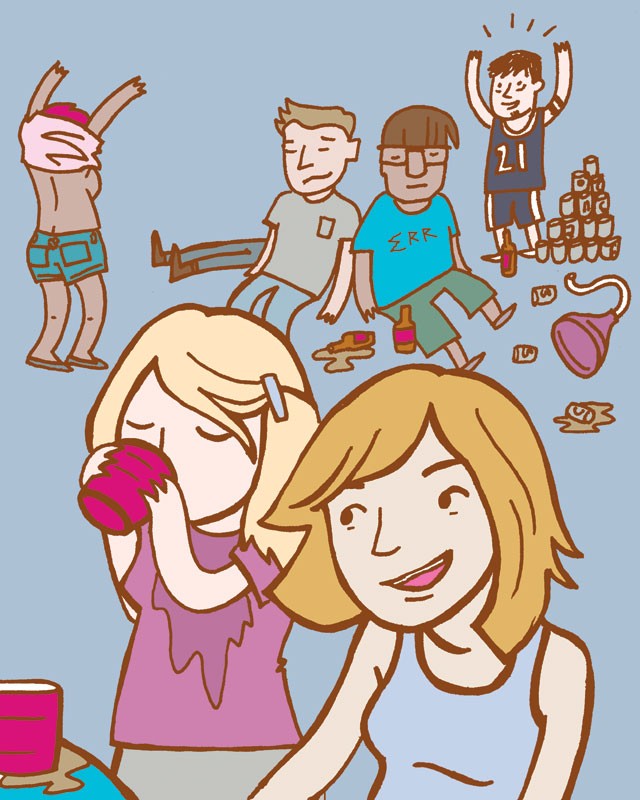 It's 8 a.m. following my first all-out, animal-housin' party since joining Trinity University's Greek life and I'm talking to another unfortunate soul who slept on the grimy, piss-and-beer smellin' couches littered around the house. Only after I stop talking do I realize how viscously drunk I am — so much so that I can't remember waking up and walking into this room to strike up a conversation with a fellow newly initiated fraternity member. What follows is a medley of morning-into-afternoon inebriation, a 48-hour hangover, and the completion of a small fraction of the midterm work I intended to get done. And this was still the fun part.

My decision to join Greek life in my sophomore year was spontaneous and fueled by a desire to avoid boredom. After bailing on the rushing process for another fraternity a few weeks before, in the eleventh hour I asked my friend, the rush chair at Iota Chi Rho, if they still had room for a like-minded kid looking for something new. They did, and I was initiated into the four-week, whirlwind process of fraternity pledging in which personal time became a memory, bizarre activity became an identity, and weird times were had by all.

At the end of the first Greek semester, I felt the camaraderie of a high school varsity team — if drinking were an athletic event. Each weekend was filled with new faces and activities, and the casualties of the lifestyle seemed insignificant: a few scars, a slew of unremembered nights, oh, and a cactus spine stuck in the bottom of my foot that somehow emerged nine months later through the topside of a toe.

As quickly as it came, the spontaneity of the first semester evaporated into monotony. Frat parties became formulaic, beginning with a house packed so thick that my glasses fogged up when I went inside. After a few hours and some neighborly calls to the police, kids began to trickle out, leaving a wake of Solo cups and the remnants of whatever party theme to clean the next day. After 3 a.m., it's the same cast of characters: a group huddled together screaming Top 40 at the top of their lungs, a half-dozen kids passed out in places they will regret sleeping the next day, and the perennial Dude, just a little too old to be there, chatting up a girl frantically texting a ride like it's a helicopter lift out of a war zone.

When the next semester started, a divide emerged between the Greek life and what I wanted for mine. For the past six months, my number one recreational activity was getting fucked up, and I was sick of it. Sick of walking home with joggers in the morning light, of going to class in the hazy state post-drunk but pre-hangover. There's little time for much else other than schoolwork and partying when weekends start on Wednesday night. I had books to read, drums to play, and girls to remember talking to.

For many members, Greek life can be one of the most rewarding experiences of their college career, filled with lifelong friends and a strong sense of community. And on the individual level, the majority of those I've met I've enjoyed spending time with. But in an environment that not only encourages but thrives upon reckless behavior, I felt like most social events became an exercise in alcoholism, the personal factor becoming secondary. I left Greek life because of a feeling of being limited — oddly enough, the same reason I got into it.