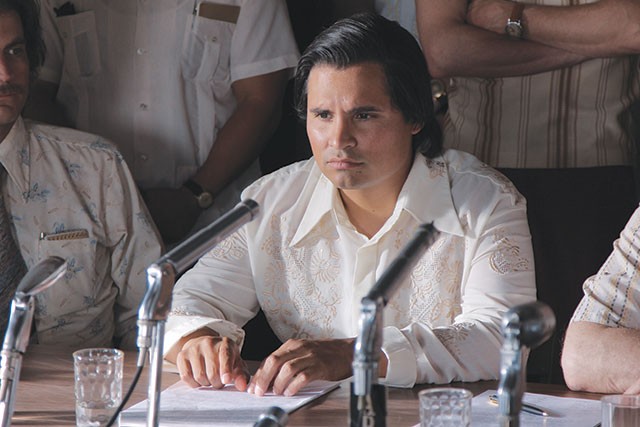 As the credits began to roll at the end of director Diego Luna’s much-anticipated film César Chávez during its North American premiere at the SXSW Film Festival, a number of moviegoers sprung from their seats in spirited applause. Led by audience members wearing red shirts with the United Farm Workers insignia (a black Aztec eagle) printed on the front, the standing ovation was spurred by the same small but enthusiastic group that gathered in front of the theater before the screening to chant “Sí se puede” (the UFW’s motto, which translates into “Yes, it can be done”) in unison and show their support for the long overdue film, a biopic on the late Mexican-American labor union organizer and civil rights activist who co-founded the UFW in 1962. It was the same faction that cheered every time actor Michael Peña (End of Watch), playing the lead role of Chávez, made a grandstanding speech or shared a subtle life lesson, and that jeered when archival footage was shown of union-busting U.S. presidents Ronald Reagan and Richard Nixon.

An Interview with Diego Luna, Director of 'César Chávez'

Locally, these are the same men and women who faithfully organize the annual César Chávez March for Justice, which takes place this year on March 29, the day after the film opens in San Antonio, and who were successful in their hard-fought bid to officially change the name of Downtown’s Durango Boulevard to honor Chávez’s legacy. To them, Chávez has earned every ounce of admiration for his hard work (he passed away in 1993) on behalf of thousands of underrepresented migrant farmworkers. If anything, César Chávez, the movie, follows suit and gives Chávez supporters the high-profile film version they have been longing for. Cinematically speaking, there should be plenty of pathos and drama to appeal to those who aren’t driven to the film for historical reasons alone.

Unfortunately, César Chávez, as directed by Luna, is not that film. A fine tribute to an extraordinary man, yes, but it is not something that will have a lasting effect in the same biographical sense as other social-issue films like Norma Rae, Milk or Dallas Buyers Club. Luna’s attempt to depict Chávez’s story on the big screen is well-intended, but there is only so much a director can do when the screenplay is an exercise in hero worshipping.

Written by Academy Award nominees Keir Pearson (Hotel Rwanda) and Timothy J. Sexton (Children of Men), César Chávez begins with Chávez (Peña) already at the center of the fight for immigrant workers’ rights—little backstory is given for those unfamiliar with Chávez’s early life and what might have actually motivated him to undertake the cause. The struggle itself is what seems to matter most to Luna and his pair of proven scribes. Plenty of conflict unfolds as we watch Chávez, with support from his wife Helen (America Ferrera) and co-UFW founder Dolores Huerta (an underused Rosario Dawson), organize his fellow farmworkers to demand better working conditions and wages, which ultimately leads to a strike and boycott of table grapes grown on California vineyards. Actor John Malkovich (Red 2) goes through the motions as Bogdanovitch, one of the pigheaded grape growers who refuses to come to an agreement with UFW. Much of the film boils down to these key events in Chávez’s adult life (other milestones include the UFW’s 340-mile “pilgrimage” from Delano to Sacramento and the first of three hunger strikes Chávez carries out), but Luna never really gets to the heart of each matter and appears to be scrolling down a checklist to make sure he hasn’t missed anything supporters would be disappointed not to see.

Most of the film’s shortcomings originate from the script, which was supervised by the Chávez family. They specifically chose Luna to tell their patriarch’s story after turning down other offers through the years. In Luna’s hands, Chávez’s narrative stays true to the history books, is tidy and safe and discounts anything that could be construed as controversial. It’s here where César Chávez loses an opportunity to dig deeper inside the man and, instead, follows biopic convention. Luna and company skim across themes from Chávez’s trouble maintaining a relationship with his children (a plot point thrown in with zero emotional value) and turmoil between union members who are not sure Chávez’s commitment to nonviolence is the best way to move forward.

As a teaching tool for a new generation who might be more willing to watch a movie than read a biography or even watch an informative documentary on Chávez’s life (1997’s The Fight in the Fields or the exceptionally moving recent doc Cesar’s Last Fast come to mind), César Chávez is decent enough for a quick overview. There are, however, superior and more inspiring resources out there, which actually come without the ever-so-thin layer of Hollywood gloss.