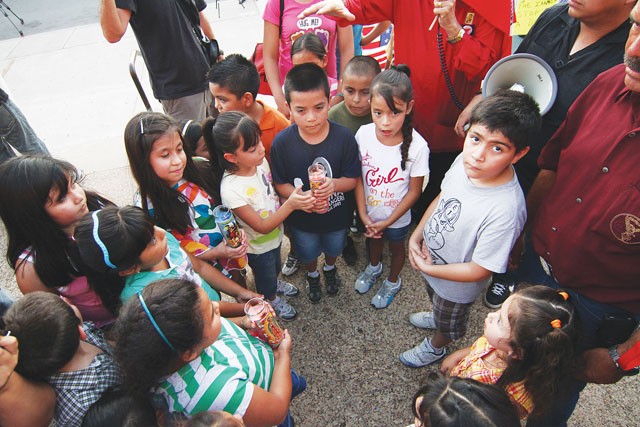 Bexar County Sheriff Amadeo Ortiz has requested an internal investigation to look into complaints that one of his deputies has been playing the part of an over-zealous immigration officer in the Timberwood Park area this past year.

Local resident Miguel Perez says he was pulled over, questioned about his citizenship, and released. Perez says Plate told him specifically he intended to “clean up the area” by tracking down undocumented Mexican residents. Perez said he knows of at least nine others who Plate has stopped for immigration checks, which has landed some in deportation proceedings.

“Our wives no longer want to go to the grocery stores to buy groceries,” Perez said. “We just want to be left alone and for our wives, our children, not to be terrorized.”

Plate could not be reached for comment, but state law enforcement records show he has no disciplinary record with the Bexar County Sheriff’s Office.

Carlos de Leon, an activist with the Brown Berets of San Antonio, said he first began receiving calls from families living in the small neighborhood earlier this month complaining the deputy had been on a mission to snare undocumented immigrants in his patrol area. Immigration statuses vary in the largely Mexican-immigrant community, de Leon said — many are lawful permanent residents who have lived in the U.S. for decades, while others have been given work permits while they vie for permanent residency in immigration court. Others, he said, are undocumented, some with U.S. citizen children

. “After I talked with them, I quickly got the impression these people were living in terror, that this deputy was a loose canon,” de Leon said. Apart from allegations of targeting Hispanics for traffic stops, and that Plate would called on immigration agents even after residents showed work permits and drivers licenses, some families claim the deputy would often drive through the neighborhood loudly calling out to immigrants over his squad-car bullhorn, asking that they come out of their homes and show their papers

. “He’s stopping people just because they’re Mexican,” said José Gomez, who’s lived in the U.S. for 40 years and was granted permanent resident status in 1971. “He looks for laborers, for beat-up trucks with tools and ladders in the back. He’s looking for working people.”

José Gutierrez, an undocumented immigrant from central Mexico who’s lived in the neighborhood since 1991, said he was stopped by Plate earlier this month while driving to a job, hauling bags of sand in his old pickup. “I thought maybe there was something wrong with the car, but he didn’t try to write me a ticket or anything. … He didn’t tell me why he pulled me over. He just called immigration. ‘Where are you from?’ was the only question,” Gutierrez said, adding that he’s now fighting his deportation with help of lawyers with the local Cesar Chavez Legacy and Educational Foundation.

De Leon and several of the families approached the sheriff’s office earlier this month demanding Plate be fired. Bexar County Deputy Chief Dale Bennett confirmed the complaints have sparked an internal affairs investigation, something he says the department is trying to fast track. “The complaint that’s been filed against him, the belief is that he’s actually racially profiling people. … It’s been put on the fast track because, obviously, this is not something the Sheriff wants happening in the department.”

Still, family members and activists working in the area were outraged when they saw Plate back on his usual patrol last week stopping nearby motorists, despite promises from the sheriff's office that Plate would be reassigned elsewhere in the county while the internal investigation was underway. At least two of Plate’s stops escalated into immigration checks last week, de Leon and others in the community claim, and two men were taken into ICE custody — one has already signed his deportation order, while the other says he will fight his case, de Leon said.

The charges against the deputy echo an intense debate that reached a fever pitch during the recent legislative session, when some GOP state lawmakers and Governor Rick Perry pushed hard for so-called “anti-Sanctuary Cities” legislation that would have allowed any local officer to inquire about a person’s immigration status (the bill ultimately failed). Both Bexar County Sheriff Amadeo Ortiz and San Antonio Police Chief William McManus publicly decried such measures, saying they eroded public trust in local law enforcement and raised the fear of racial profiling within the community. And while charges of racial profiling have dogged other local suburban police forces, most notably with similar allegations against the Balcones Heights Police Department in 2009, the sheriff’s office has largely been sensitive to issues dealing with immigration.

Departments have the option to sign so-called 287(g) agreements with ICE in order to spearhead local immigration enforcement on their own, though only three departments in Texas have done so, none of them local.

Apart from ICE’s already routine immigration checks for those detained in the county lockup, Bennett said department policy is to only call ICE agents out to stops in “extenuating circumstances,” saying, “Typically these guys make hundreds of traffic stops every day, and we certainly don’t make it a habit of asking, ‘Hey, where are you from? Oh, you’re from Ecuador? Oh, well we better call immigration.’ It doesn’t work like that. … There’s got to be some extenuating circumstance that warrants that. Like if we’ve got 20 people crammed into a 10-passenger van, then that’s another story.” Bennett called it a “fluke” that Plate was back on patrol in the community last week and blamed miscommunication within the department, saying Plate was reassigned for certain last week after the families complained again. “I can tell you we’re not going to make it a policy to actually go out and target certain people because, for one, that’s just plain wrong. And two, we just don’t have the resources to commit to those kinds of endeavors.” Following last week’s arrests, immigrant-rights groups and dozens of families from the northern Bexar County community swarmed the steps of the Bexar County jail Friday, demanding the department fire Plate.

“In general, I think the Bexar County Sheriff’s Department has not been a magnet for these types of complaints like other county law enforcement or other local law enforcement,” said Joe Berra, a staff attorney with the Texas Civil Rights Project. “If this is an officer that’s trying to take immigration matters into his own hands, I hope that’s something that they decide to discipline or nip in the bud.”
“If we did the immigration thing, we would have a problem here in our jail, for one. And it’s not socially acceptable for us here. It’s a federal job,” Bennett said, adding that the investigation into Plate’s actions could take as long as three months.