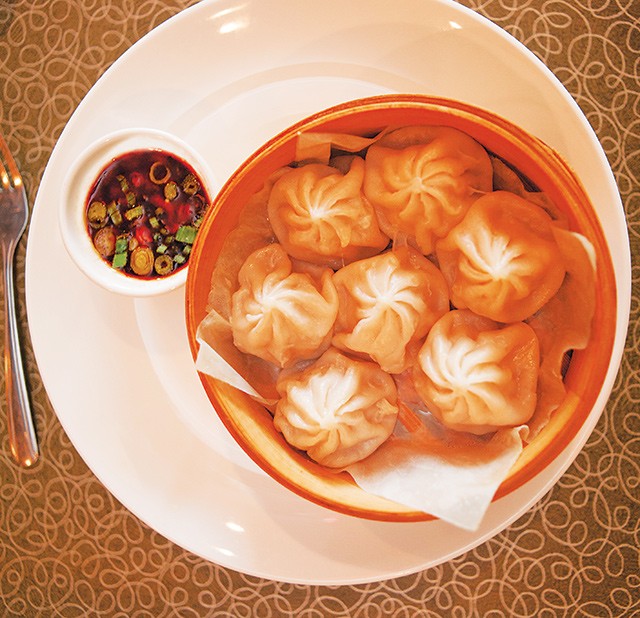 My German grandmother kept a stoneware crock on her back porch in the fall. Into it she put shredded cabbage from her garden, occasionally some pickling cucumbers, and always salt. The mixture sat beneath a porcelain plate covered with cheesecloth and weighted down with a large, smooth stone. I constantly risked a swat by sneaking out strands before they were ready.

I’m pretty sure that a morsel of Chinese cuisine never passed my grandmother’s lips, but I’m equally certain, given her nose-to-tail frugality, that she would have appreciated the sauerkraut-esque braised pork intestine with pickled cabbage served at Tang Street, a Northside outpost of China’s Northeastern, or Dongbei, cuisine. The dish won’t win any beauty contests, and a bit of ginger is the only assertive flavor. But the tender tripas seem perfectly matched to the slightly sour cabbage that’s a tradition shared with neighboring Korea. It’s all remarkably good, especially with the addition of a dab of chili sauce. (Ask for it.)

Dongbei was once called Manchuria, and its food is not among the “eight great traditions” of Chinese cuisine — possibly due to its reputation as a land of poverty and potatoes. But you wouldn’t think penury while eating a platter of shredded potato with chopped chili pepper. Cooking the tuber just to translucency offers an entirely new way to see it, and though the amount of chili is visually daunting, the heat level isn’t. The only spice in a platter of tersely labeled cucumber needle mushroom comes from its drizzling sauce, inflected with sesame oil and chili flakes; the plate itself consists of mounds of pliant, shredded cucumber intertwined with delicate, thready mushrooms. There’s no flash or dazzle — just simple ingredients artfully combined.

More artifice might have been welcome with the Tang Street chicken lettuce wraps; they were no better or worse than anywhere in town. Steamed pork buns, seeming to us more like dumplings, are also fairly common, but Tang Street’s are uncommonly delicate — and any leftover dipping sauce is great poured over steamed rice. Unique to TS (as far as I know), and utterly amazing, is the humble dish of noodles with shredded pork and pickle. Dongbei is a wheat-growing culture, in tribute the made-in-house wheat noodles are silky and sublime, and the kimchee effectively neutralizes any hint of porky fattiness. A bargain at $5.99.

Lamb is another Dongbei staple, and it shines here in brown sauce served bubbling over Sterno. Baby bok choy is the only other major ingredient in this ginger-spiked savory stew, and though you may want to keep pace with the bubbles, the quantity will eventually defeat you; I took half of it home, reduced the liquid and recombined it all over pappardelle. Cumin beef is a plate that seems swept in straight off the steppes, but its traditional, woody spice nevertheless manages not to overwhelm. White sesame seeds add a degree of delicacy to this lusty dish and to a similar one with stir-fried squid and cumin that puts many other renditions to shame.

Some things at Tang Street do get lost in translation. The online menu differs from the one you will be presented (make sure you get the one-page insert with the more esoteric stuff); some dishes appear in more than one location with differing descriptions. Depending on which server you get, things may not get any more clear — which is what may have happened with an order of pork “slab” that turned out to be twice-fried, but with belly and bell peppers… Good, but not remarkable. Never mind. Pay heed instead to the wisdom of my fortune cookie: “Most spend lives reading the menu instead of enjoying the banquet.”