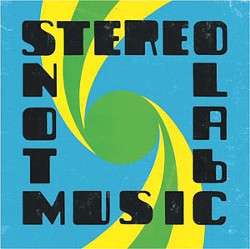 
It’s been a rough decade for Stereolab. One member died in 2002 after being hit by a truck. Then the band was dropped by its record company for poor sales. They finally pulled the plug last year, going on indefinite hiatus. Their 12th album, Not Music, was recorded at the same time as 2008’s Chemical Chords, and like that record, it’s an open-ended piece that draws just as much from ’60s American R&B as their usual mix of spacey lounge and European electronic music. Tim Gane and Laetitia Sadier put aside many of the gliding mood pieces that made albums like Emperor Tomato Ketchup music geek favorites back in the ’90s. There are still some challenges on Not Music — several songs sound like something Austin Powers would shag to, and Sadier’s accent can still be a hurdle for Francophobes. But “Everybody’s Weird Except Me” and “Supah Jaianto” are among the most inviting songs of Stereolab’s career.