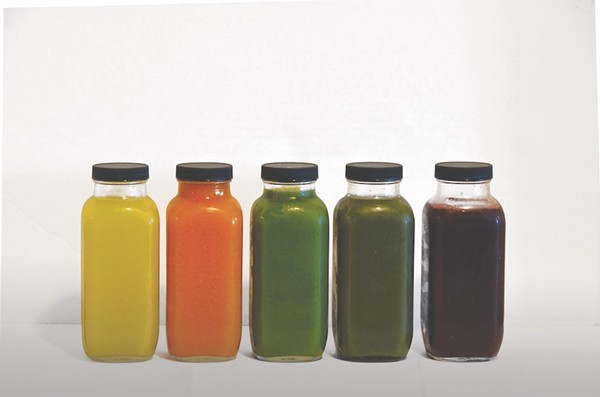 Whether you've been out the night before and want a fresh start or want to start the day with 17 servings of vegetables, there are juice shops out there for you. Each has carved out an audience within SA, but here's a rundown of where to get your fresh-pressed beets and then some.

Fresh-pressed and raw juice is the way of life at Farm to Juice (18730 Stone Oak Pkwy., Suite 100, 210-332-5853). Stop in to this sleek shop for granola, coconut yogurt, brownie bites, shots, nut milks and kefir (fermented milk drink), or a Nuttin' Butter smoothie made with peanut butter, banana, agave or honey, and chocolate or vanilla almond milk. Juices tackle everything from detoxing to memory aids. Don't miss the Butterfly Kiss with pear, mint, pineapple and strawberries.

For Drew Taylor and sons Jason and Josh, juicing is life. The trio are responsible for Juicer Heroes (15701 San Pedro Ave., 210-233-9958), where along with Dr. Michael Boss, they share wellness information with the community to help bring balance to people's bodies. Stop into the original location (which is a former Popeye's) for a juice or two such as their Kaleman Creation with apple, pear, grapes, kale, red cabbage and strawberries or pick up a three-day cleanse, which features instructions on when and how to drink your juices.

Want a bite with your beverage? Juice Central (4718 Broadway, 210-257-8223) in Alamo Heights features artisan juices, smoothies and salads aimed at helping the drinker glean as many nutrients as possible through 16-ounce pours. "Rejuvenate" features carrot, green apple, kale, spinach and ginger, or choose a "Metabolism Booster" with chard, spinach, cucumber, mint, pineapple and lime. Need an immediate boost? Pick up a 1-ounce shot of wheatgrass while there.

Pick up a fresh juice or smoothies from One Lucky Duck (303 Pearl Pkwy., 210-223-3825), originally based out of New York City, but don't go hungry as the location also carries vegan, gluten-free fare such as surprisingly addicting spicy Thai lettuce wraps and zucchini and kale chips. If One Lucky Duck is good enough for Pauly Shore, then it's good enough for you.

With three locations up and running (in Alamo Heights, Southtown and Austin), and two more on the way (in Hemisfair Park and Houston), San Antonio's own Revolucion Coffee + Juice (multiple locations, revolucionsa.com). is steadily expanding into a healthy little empire. Launched by Manny and Angie Carral, the company prides itself as the first establishment to introduce the Alamo City to cold-pressed juice and a totally vegetarian take on coffee culture. Along with other customers, the '09 flagship easily won us over with concoctions like Mean Green (an easy-drinking blend of cucumber, celery, kale, lemon, ginger and apple) and The Cure (a hangover-helping mix of carrot, apple, beet, lemon and ginger) but sealed the deal with signature honey lavender lattes (try on with the house-made almond milk), insanely addictive acai and pitaya bowls (go for for the protein-packed peanut butter variety), and a laptop-friendly atmosphere that's both laid-back and focused — with an eclectic playlist to boot.

Spelled out by their punchy color scheme, cartoonish logo and quirky juice names (Hot Lei, Purple Rain, Xanadu, the list goes on), Urth Juice Bar (multiple locations, urthjuicebar.com) .maintains a playful spirit while turning locally grown produce into "a healthy alternative to fast food." Beyond crowd favorites ($7.50-$8) like Grassy Knoll (combining ginger, apple, parsley, spinach, cucumber and kale) and Twang (a tart blend of pineapple, carrot, grapefruit and orange), Urth puts its signature spin on smoothies ($7-$8) like Pina Turner (made with pineapple, yogurt, coconut oil and pumpkin seeds) and Sublime (an unlikely mix of avocado, banana, yogurt, orange juice, honey and ice) that can be jazzed up with an array of healthy add-ons. Naturally, detoxes and cleanses (lasting from three to seven days and costing between $105 and $250) are among the offerings at Urth, which boasts locations in Olmos Park, Southtown and Stone Oak.