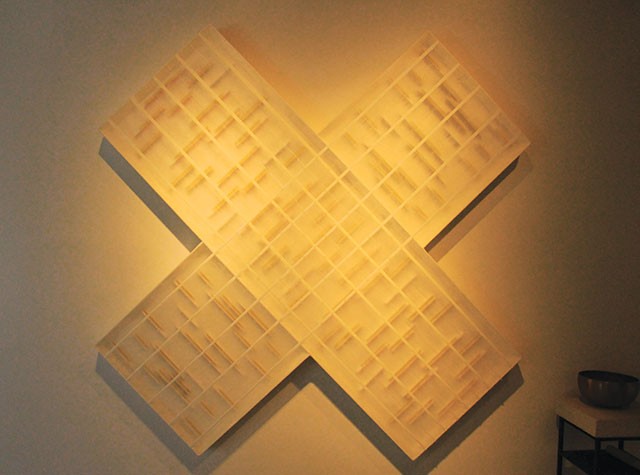 “Return” unites three distinguished Texas artists who made their international reputations in the world’s art capitals and came back to join the Hill Country artists’ colony centered in Wimberley. Gallery owner Susan Oliver Heard opened Cinnabar with brutally frank, real-people nudes in “San Miguel Exposed” by George Krause, founder of the University of Houston’s photography program. His large-scale, black-and-white photographs can be found in major museums, including New York’s Museum of Modern Art, which first exhibited his work in 1960 when he was 21.

“Return” features surreal, symbolic nudes from Krause’s classic I Nudi series dating from the 1980s. Looking like an evolutionary misstep, a giant sea turtle is held by a naked man with only his hairy legs showing in Turtle Man. Perhaps Krause’s best known image is Swish, a rear view of a voluptuous woman flipping a white piece of cloth over her head like a victory banner. Medusa is an aerial view of a woman in a bathtub with her head ringed by sopping curls. An almost veiled, barely glimpsed nude woman stands in the shadows of Dream Door. In these lyrical, mythically inspired images, Krause plays the nude like a finely tuned instrument. Rather than images of unattainable beauty designed for adoration or even titillation as in most of art history, Krause adds new wrinkles to the nude genre by capturing real people with actual human emotions and even humor.

Inspired by the Sibyls she encountered touring the restoration of the Vatican’s Sistine Chapel, Catherine Lee’s free-standing, abstract sculptures were spotlighted in her 2005 retrospective at Dublin’s Irish Museum of Modern Art. Coated with richly expressive, painterly patinas, the jutting, geometric forms suggestive of the female oracles of ancient Greece are hollow, made with welded bronze metal sheets, yet they have the timeless quality of ancient artifacts. Cloaked by a brackish green surface, Delphica looks hunched over from one point of view, but appears to have shoulders squared from another. Sporting a more light-hearted bluish-green patina, Sibylla preens and poses. Last fall, the McNay Art Museum acquired Lee’s eight-foot-tall, monolithic bronze Lewis (Hebrides 3) from her “family” of sculptures inspired by the Hebrides Islands off the coast of Scotland.

Working with translucent nylon and glow-in-the-dark paint, McKay Otto debuted his Ever Not Ever series last fall at Victoria’s Nave Museum. Purportedly, Otto acquired the super-strong nylon he uses from Peggy Fleming’s supplier while she was in the Ice Capades. Stretching the nylon “canvas” over a three-inch deep wooden frame, Otto creates a kind of shadowbox, splattering the nylon screen with paint, adding color in three-dimensional elements to create patterns in the background and then using fluorescent paint to form geometric shapes such as pyramids and circles that only appear when the lights are out. Accompanying each piece in the series is a Buddhist prayer bowl, which rings like a bell when struck with a handy wooden mallet. Designed to change and evolve over the course of a day, Otto’s grid-like constructions with paint, sculpture and light are coolly meditative yet fun.