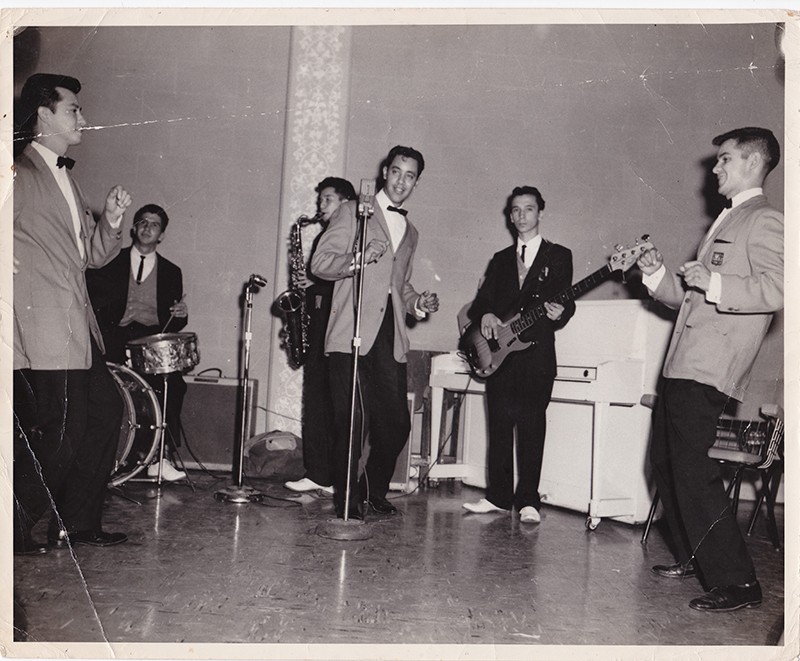 Digging in flea market bins and scouring the digital marketplace, Rae D. Cabello is on the prowl for the dusty soul hits of San Antonio's West Side Sound.

"In 2005, I really started buying up these records," Cabello told the San Antonio Current. "I thought it was a cool thing. This is from San Antonio. This is badass. In the same way that screwed music is to Houston, I was down for the West Side Sound as a San Antonio thing."

With square-rim black frames on his square face, Cabello is lit with the passion of a collector grabbing a body of art from the sands of time. After swapping messages with the founders of Chicago reissue label Numero Group, Cabello became the head researcher for the label's next San Antonio project: English Oldies, a compendium of the Royal Jesters.

At Hi-Tones on Saturday (June 23 nationally), Numero will release "28 tracks of heartbreakers," as Cabello calls them. On vinyl or CD, English Oldies follows the long and elaborate career of the San Anto hunnies, from their days in the halls of Lanier High School to the polyester funk of the Chicanismo '70s.

Apart from the soul food taste of the recordings, one of the most exciting parts of the West Side Sound is its fusion of Chicano and African-American identity. Brown kids playing black music, documented on 45s by local microlabels with brilliant, candy-colored decals.

"No where in the world has a regional style of R&B music like San Antonio," said Alex LaRotta, who penned his master's dissertation at Texas State University on the West Side Sound. "Period. And it was so vast — there are countless recordings and independent labels which sustained this unique culture for so long."

It's called the West Side Sound, but the movement's roots lay on the other side of town. In the '40s and '50s, the East Side housed a few spots on the Chitlin Circuit, the constellation of venues in America booking African-American blues and rock 'n' roll artists.

"Eastwood Country Club, Keyhole Club, Ebony Lounge — these were clubs that fostered this unique intercultural mixing of blacks, whites and Hispanics during the era of Jim Crow," LaRotta said.

At these racially integrated clubs, a rarity in Texas at the time, young San Anto musicians learned from the touring masters, or sat in with local legend Spot Barnett for a real-time education.

"San Antonio musicians would be in the audience and learn rhythm and blues listening to Bobby Bland and all these guys that were coming through," said Ruben Molina, author of Chicano Soul. "Doug Sahm, Randy Garibay, Joe Jama [of the Jesters], Sunny [Ozuna]'s musicians were all there learning."

For the musicians too young to hit the bars, the radio offered an education on the dial. Between the long programming of conjunto, norteño and orquesta, DJs slipped in a few hours of doo-wop and rock 'n' roll. Sunny Ozuna, the reigning King of San Anto Soul, dubbed the hours "English oldies," from which the Numero reissue takes its name.

"The radio stations that played Spanish music had what they called 'English oldies,'" Ozuna noted in the album's liner notes. "The deejay would play the Spanish songs but then he would pick some English oldies to add to that so we all grew up listening to our stuff."

Soon enough, bands like Sunny and the Sunglows, Mando and the Chili Peppers and Rudy and the Reno Bops popped up in the fertile ground of the West Side. As these names suggest, many of the bands had an undisputed leader singing at the front mic, with a rotation of backing players filling the rhythm section and busting tertiary harmonies.

In 1958, in the halls of Sidney Lanier High School just west of downtown, the Royal Jesters were cast in a different mold. With no single name claiming the marquee, the Jesters borrowed from the close harmonies of Mexican crooners.

"We based our harmonies on the Mexican trios like Los Tres Diamantes, Los Tres Aces and Los Panchos, which were very similar to the group harmony sound we were listening to on the radio," founding Jester Oscar Lawson said in the liner notes.

"The Royal Jesters' background comes from their parents' records by Mexican trios, three-part harmonies sung in Spanish," added Molina. "Take that and you get the foundation of the Royal Jesters. But then you bring in the harmonies from the black artists and you're able to create this sound."

Formed by Oscar Lawson, Henry Hernandez, Louie Escalante and Mike Pedraza, the Royal Jesters tried their simple, lovebird songs at the sockhops and school dances of the day.

"Between classes in school, they'd get together and sing in the hallway," said Cabello. "Girls would just swoon. They were heartbreakers. They were desperately in love with their girlfriends. And there were so many girls in love with those guys."

Eager to make it to the next level, the Jesters began writing their own material.

"All the groups, they wrote all their own stuff so we figured that's the way it must be," Henry Hernandez told the Current.

In 1959, the band cut a 45 on San Antonio's Harlem Records and shipped it out to regional press. The single, 1959's "My Angel of Love," found a good home at KMAC in the hands of radio impresario DJ Joe "The Godfather" Anthony. 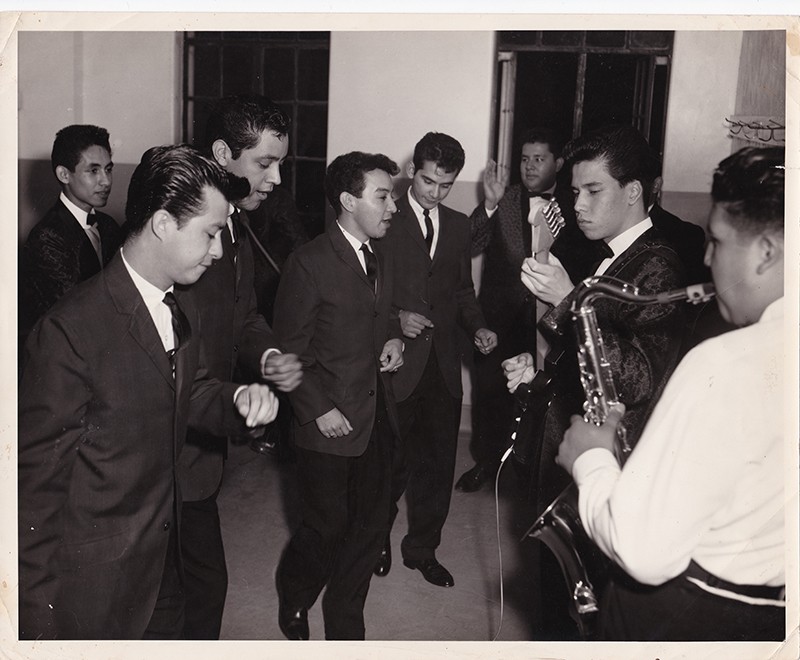 Of all the tastemakers in San Antonio music history, The Godfather may have had the greatest impact on the city's rock 'n' roll palate. In the late '60s and '70s, Anthony picked up on the heavy sound coming out of industrial England, helping to shape San Antonio as a metal market, a title that stands to this day. But in '59, Anthony was on a local kick, spinning the Jesters' single into oblivion.

After the radio boost from the Godfather, the Royal Jesters signed a deal with Abe Epstein's Cobra and Jox labels. A real estate mogul by trade, Epstein was South Texas' most pervasive music industry player. In a true collector's crate, you won't have to look too long before running across a 45 for an Epstein producer or publisher credit.

A 1962 Cobra single, "I Never Will Forget," found its way out of the bin and onto English Oldies. With Epstein helping out on a backing harmony, the cut is loaded with shoo-be-doo backgrounds and an American Graffiti feel — with the band cruising to the fruteria instead of the drive-in.

Like so many moguls in his stead, Esptein could make you popular, but he wouldn't make you rich. Despite scoring a few regional hits, the sales never trickled down to the Jesters.

"We never got any money for none of these other recordings," Hernandez said in the liner notes. "Nobody ever paid anybody. So we said, 'let's do it on our own.'"

In 1964, the same year the Jesters created their Clown and Jester imprints, the band made a sea change in the rhythm section. Since the beginning, the Jesters hired the instrumental guns to fill out the band. Now, for the first time, the band picked up full-time instrumentalists to populate the Royal sound. With a boisterous, tight horn section and Luvine Elias, Jr. on the organ, the Jesters' reign in San Antonio was set.

"They were the local band," said Molina. "With his bands, Sunny Ozuna spent 10 years on the road. The one that never really left San Antonio, that was really a San Antonio band, was the Royal Jesters."

The Jesters even ran a dance hall, Patio Andaluz. At the corner of Colorado and Commerce, the Jesters held a lovestruck Chicano court for three years.

This middle period of the English Oldies catalog is some of the sweetest and most prominent stuff from the band.

On "We Go Together," the Jesters sing, naturally, of stuff that goes together, trying to a woo a girl into going steady. Warm chords and heart-piercing horns lay down the first date setting, under the convincing, fluttering melody.

In the 1970s, Chicano musicians faced a dilemma of identity. Rise with the tide of cultural pride or fall to the dregs of popular music. Led by coastal powerhouses like Santana and the Fania All-Stars, the wave of Latin rock and funk swept up the Jesters and many of the West Side Sound bands.

"The West Side Sound reflects these social changes in the song titles, messages, and iconography of the era," said LaRotta. "The Royal Jesters' Yo Soy Chicano and Sunny and the Sunliners' Young, Gifted, and Brown are good examples of this cultural turn in San Anto — when Mexican-American youth were proudly self-identifying as Chicanos."

On English Oldies, tunes like "Afro-lypso" and "Spanish Grease" pop up, doubling the tempo of the laid back soul of the '60s. Boogaloo guitar rhythms and a Latin rock backbeat dominate the Jesters' funk, with the frontline switching over to Spanglish.

But like the constructive movement of Chicano pride, the Royal Jesters couldn't avoid the problems of the 1970s. After a strong run in the early decade, the oil embargo of 1973 slowed the Jesters' momentum to a crawl.

"It was Valentine's Day of 1977," Hernandez said in the liner notes. "That's when we stopped performing ... At that time, gasoline was starting to go up, that's when they had shortages in gas at service stations and stuff like that ... A lot of the groups we toured with, they started to slow down and break up because it was getting a little hard to travel."

Nearly two decades after they toyed with the hearts of Lanier High School, the Royal Jesters were done.

Almost 40 years later, Cabello, dressed in the monochrome of a graphic designer (Rae does in-house art for RackSpace), is one of the DJs in town spinning the West Side Sound back into the ear of the young barfly. In recent years, with upstarts Chulita Vinyl Club, Alamo City Soul Club, Faust's 45 Friday and Tuckers' long standing Soul Spot, the West Side Sound is a known entity in young San Anto.

"The Sound never went away," said Cabello. "When Salute was around, Azeneth was playing the Jesters and Sunny. The West Side Horns have been doing their thing for years. Ram would have that on in the jukebox in Taco Land. It never left."

With the Jesters reissue — the third LP in Numero's catalog dedicated to San Antonio — the West Side Sound is back in high fidelity for all to take in.

At Faust, more and more people come up and request, 'hey do you have the Royal Jesters?" said Cabello. "Fuck yeah I do!"