Nurtured with faith, a community garden in San Antonio springs back from the devastating winter storm 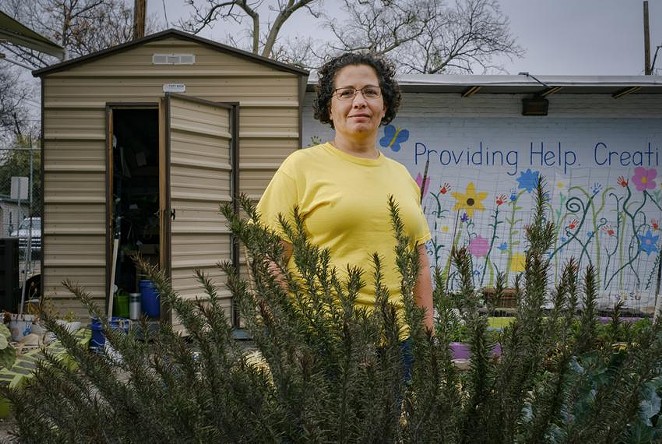 A bountiful garden is built on its tenuousness.

Some sown seeds won’t germinate. When the sprouts of others dutifully rise from the ground, seedlings must often be delicately thinned to give others room to grow. And the plants that perish serve to nourish the soil so others may grow wide or tall in their beds.

When a garden is tended to feed a community in need, it’s also built on faith.

The harvest from the St. Phocas Garden feeds predominantly Hispanic, low-income people living on the West Side of San Antonio — its vitality determining whether many families will be able to eat fresh produce.

Named for the patron saint of gardeners, the St. Phocas Garden helps supplement a local food pantry operated by Catholic Charities of San Antonio. Its master gardener, Jennifer Sierra, labors throughout the year to ensure the pantry’s nonperishable goods, like dried pasta and canned beans, are accompanied by salad mixes of lettuce and spinach, onions and shallots, various kinds of kale, cabbage, broccoli, an assortment of herbs, and lots and lots of tomatoes.

In the aftermath of the severe winter storm that ravaged the state in mid-February, Sierra is now beginning anew with her vegetable patch, parts of which were ruined during the unusual prolonged freeze. She knows who is depending on it.

“Nobody comes here because life is great,” Sierra said last week, standing between some of her decimated garden beds. “They come for support.”

As word of the impending storm spread, Sierra was forced to make some tough choices.

The winter greens she knew could survive the subfreezing temperatures got priority for the limited frost cover she had on hand. Knowing it was unlikely they’d make it, she picked nearly 15 pounds of unripe tomatoes, planning to help them mature later in brown paper bags. In a last-ditch effort to save several tomato plants, she wrapped them in cardboard and sent up a couple of prayers.

When Sierra returned to the garden after the chill subsided, she found droopy broccoli stalks seared yellow from the cold and herb bushes that appeared bruised in the spots that froze over. A mess of gangly yellow and brown limbs hung sadly from where her tomato plants once stood.

A computer scientist turned gardener — she was looking for a career that would help feed her soul — she always has a backup plan. But even that was partly foiled by the atypical storm.

Growing nearly everything in her garden from seed, she had started what would be eventual additions to St. Phocas in little round and square black pots she was caring for at home. But like millions of Texans, Sierra was without power for days during the cold. The temperature in her house eventually dipped to 39 degrees — far too cold for the young seedlings. Many of them didn’t survive.

The several hundreds of pounds of fresh produce grown at St. Phocas each year are transported the 2 miles from the Guadalupe Community Center, where the garden is housed, to the St. Stephen’s CARE Center, where hundreds come by each day to collect food distributed from cardboard watermelon crates.

While the food pantry serves San Antonians from all ZIP codes, it’s near the heart of the historic West Side, where 91% of residents are Hispanic, nearly 2 out of every 5 residents live in poverty and the median household income doesn’t reach $30,000 a year. Many in the community frequent a nearby Dollar Tree for affordable food.

The pantry’s footprint has grown significantly during the pandemic. Previously, it was helping 300 families a week. At last count, it was serving between 1,200 and 1,500. Its newer clients include people for whom normalcy has always been particularly fragile but who now are struggling under the weight of the public health crisis. Some have seen their work hours slashed, some are parents needing to feed children who are no longer attending in-person school, some are people who became sick with COVID-19 and, last week, some were families recovering from the storm, said Brenda Beltrán, a program director at the St. Stephen’s CARE Center.

It’s why Sierra is not one to let much go to waste in the garden.

If a pesky bird gets to one of her tomatoes, she makes sure whatever seeds are left make it into the soil. At St. Phocas, the sowing extends to the hollows of the multicolored painted concrete blocks that line 12 garden beds. Garden trimmings and weeds go into the makeshift compost pile, and rainwater is funneled into a large barrel she calls her “pot of gold.” The reason she still had tomatoes on hand in February — some gardeners pull out the plants at the end of the summer growing season — was because she works to preserve them through South Texas’ typically mild winters.

After the storm, she knows what she can’t waste now is time.

“I have to be strategic so I can keep producing,” Sierra said. “I need to feed people.”

In lieu of fresh produce, the staples of St. Phocas in the last week have been continuity and renewal.

Sierra still has her stock of unripe tomatoes, which she’ll set up for distribution once their shiny skins turn from light green and yellow to red. She’ll likely have to purchase some plant replacements, a more costly endeavor as she strives for an organic plot, to catch up with the season.

But in the end, reviving the garden will require the exact thing it’s meant to serve — community. In recent days, volunteers armed with wheelbarrows, shovels and hope returned to St. Phocas. They cleared fallen leaves and what was left of the plants lost to the freeze. Garden beds were reestablished with fresh soil to make room for new growth.

By Saturday — the garden’s sixth anniversary, incidentally — they had planted new seeds.