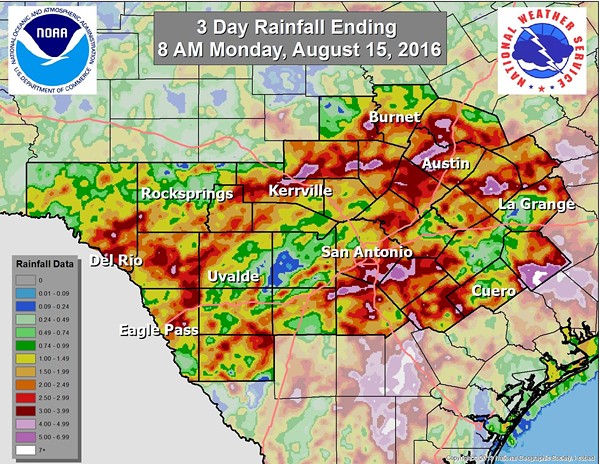 After weeks of triple-digit weather, steady rain through the weekend has started to cool the city, but not without some headache.

The National Weather Service Austin-San Antonio issued a flash flood watch early Monday morning for more than two dozen counties, including Bexar. The flash flood watch is in effect until 7 p.m. Because the soil is saturated from weekend rains, water has nowhere to go, increasing the chance of flash floods, says NWS Meteorologist Orlando Bermudez. Motorists should avoid low-water crossings, he added.

Bermudez says San Antonio residents should expect moderate to heavy rain over the next 12 to 24 hours. He said the NWS is monitoring the precipitation to see if the flash flood watch should be extended through Tuesday.

The rain isn't going anywhere after Tuesday, either. "We are in the wet pattern and we have a couple of [rain] features that are pretty much staying within the area over the next few days so there's a good chance for showers and isolated storms through Thursday," he said, adding there's no rain expected Friday and Saturday, which gives the soil a chance to dry out. A cold front may arrive next week, bringing more rain, he said.