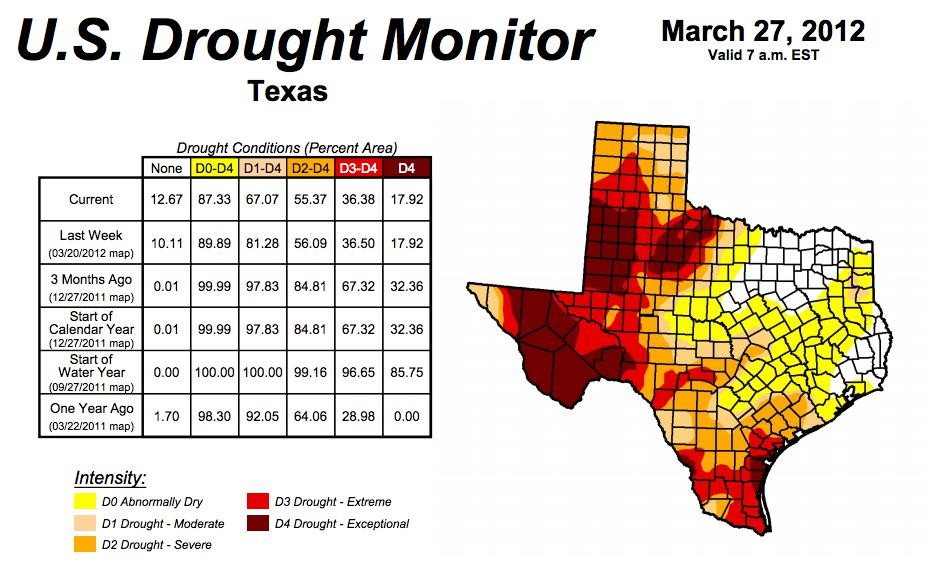 Even though a rainy winter helped quench record drought conditions across large parts of Texas, the National Weather Service warned state officials Monday that severe, state-wide drought could make a comeback when we move into the grueling summer months. Speaking to the state's Emergency Management Convention in San Antonio this week, NWS meteorologist Barry Goldsmith took officials through a series of 2011 drought maps, chronicling Texas' descent into its driest year on record. Severe drought has punished the state since it took hold in April of last year. Blazing heat and little rain dried up lakes and reservoirs, leaving some small Texas towns without water, and a bone-dry summer eventually led to nearly $8 billion in farm losses, over $3 billion in lost cattle, and nearly 4 million acres scorched by wildfire, Goldsmith said. The worst hit in September 2011, when 86 percent of the state was stuck in “exceptional drought.” Intermittent rain since December has brought much needed relief, Goldsmith said, leaving some regions with rainfall totals well above average for this time of year. He predicted more rainfall through April and May across the state. But after that, predictions for more rain get shaky. Goldsmith told officials Monday that only a summer tropical storm or hurricane could kill statewide drought conditions, particularly in West Texas, much of which is still stuck in extreme or exceptional drought. “Notice I'm mincing my words,” Goldsmith said. “We're not out of the woods just yet.” Last year's record drought, Goldsmith said, appears to have started in the fall of 2010 with the arrival of the La Nina weather pattern, which causes lower than normal rainfall. He said we appear to be moving out of the La Nina pattern and into a more neutral phase, hopefully bringing with it cooler, wetter winters. -- Michael Barajas, mbarajas@sacurrent.com