Obama To Eat Pork Sandwich To Prove He's Not Muslim 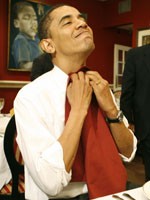 In an effort to finally put to rest persistent rumors about his religious views, President Barak Obama agrees to eat one pork sandwich.

For the majority of his term and throughout his campaign President Obama has had to endure much questioning about his faith. A recent FOX News poll says that 60% of Americans believe that he is Muslim, up from 34% just a year ago. In the same poll it was also revealed that only 8% know he is a Christian, while 22% thought of him to be the Kraken released by all powerful Zeus from Mount Olympus above.

(Another 5% felt that Pepsi Max tasted delicious while the remaining 15% were still waiting for Glenn Beck to tell them what they should think.)

It is not sure when exactly he will eat his pork sandwich. Recent details were leaked disclosing that rye bread was to be used instead of white, angering the far right for what they felt was a ‘far too Jewish for their taste’ sandwich.  Representatives from the Left have requested that Obama should be allowed to have it in wrap form or at the very least a pita to appease his constituency, but thus far talks are at a standstill.

“I won’t have the leader of the free world eating no damn hippie wrap!” says one Senator wishing to remain anonymous.

House Speaker Nancy Pelosi agreed that a wrap was ‘not enough’ to satisfy the American people while also lamenting that her own ‘pork sandwich hadn’t been sufficiently eaten in years’.

In a speech for the charity ‘Wounded Warriors’ Obama said this “While there is yet to be a full agreement on the details of this particular meal, rest assured it will be delicious. There will be a hefty serving of Pork, some sort of spicy mustard, and possibly a pickle.”

Though it is not certain if eating a Pork Sandwich will settle the matter, the President has admitted he is prepared to enter the Nathans Famous Hot Dog Eating Contest as a last resort.

A White House Aide hesitant to that likelihood explains that there would have to be some major push for Health Care Reform to “protect the President due to the nature of pork products and black male hearts in general, even though only half the Presidents heart would be in any real danger”.