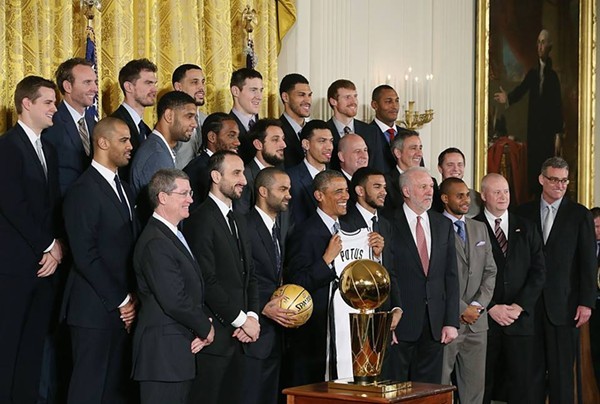 Former President Barack Obama is the true OG. Like, he would sign with the Spurs type of OG.

At a speaking event at the MIT Sports Analytics Conference (fancy), Obama was asked what NBA team he would choose to meet with if, as an All-Star, he was going to be a free agent in the summer.

He answered by listing what he looks for in a team, and ultimately felt that our very own Spurs best embodied what he was looking for.

"They're smart, they're well-run, they're focused on team. They treat everybody in the organization with respect and that is the kind of organization that I want to be a part of," Obama said. "So I would say over the last 15 years in basketball, San Antonio would be a great example of that."

Shucks! Obama was sure to throw in a bit of shade about all of the Kawhi Leonard drama going on.

But he made up for it with more compliments.

"But if look at what they built, it’s just a smart, well run operation with a good culture and it takes not just All-Stars, but people nobody saw coming and molds them into a great team," Obama said.

"Hall of Fame player, but if Popovich yelled at him, he took it because he understood he had a role to play," Obama said.

We have a feeling head coach Gregg Popovich won't write him off completely. At 56 years old, Obama would probably be in his prime in Spurs years.

Fast-forward to 46:15 to hear all of Obama's remarks.
Stay on top of San Antonio news and views. Sign up for our Weekly Headlines Newsletter.