Occupy ICE San Antonio Briefly Relocates, But It Won’t Shut Up and Go Away 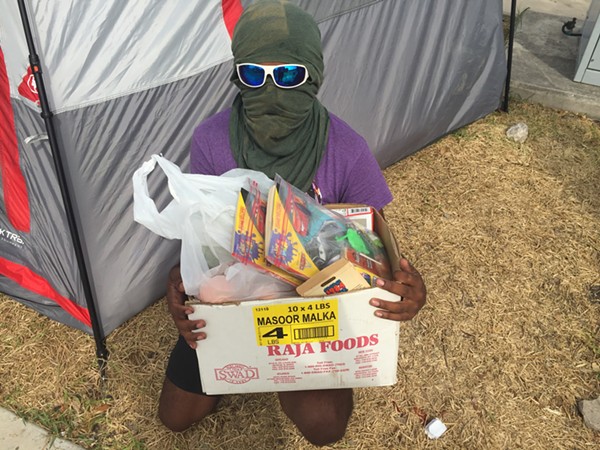 Last Tuesday, SAPD officers ordered Occupy ICE San Antonio protesters camped outside of an Immigration and Customs Enforcement facility on the Northeast Side to vacate the property and move along. And they did.

After staying away the next two days for fear of arrest — and at one point temporarily setting up under a downtown bridge to feed the homeless — the protesters returned to the ICE building early last Friday.

“As long as they’re still trying to have buses coming in and out, we’ll stay here,” said the camp’s masked spokesman who would only identify himself as “Kazi.” “We’re having an effect, which is why we decided to come back.”

Four other college-age protesters huddled in lawn chairs under a covered pavilion, and sleeping bags overflowed from an adjacent tent. While a group of women pulled up to the ICE facility, one of the protesters hurried after them to hand out kids’ activity books to share inside. He didn’t get to them before they entered the squat, fortress-like building.

Occupy ICE San Antonio has spent nearly a month camped at the spot, dubbed “Camp Cicada,” stretching banners across the entryway, banging pots and chanting slogans to disrupt the arrival of buses carrying immigrant detainees. The buses, which once arrived every afternoon, stopped Monday, July 30, suggesting the protests had disrupted the agency’s routine, Kazi said.

The group’s recent confrontation with SAPD came after someone — a police spokeswoman would not say who — called to report a small fire in the landscape mulch along the sidewalk at the ICE center. Four police cars arrived on scene, followed by an arson investigation unit, according to protesters.

Police initially gave the protesters two hours to vacate the spot, but relented after SAPD contacted the property owners, who said they had no problem with the protesters so long as they remained peaceful.

Marisa Bono, Mayor Ron Nirenberg’s chief of policy, confirmed that the Occupy Ice could remain at the site in a letter first shared on the blog Deceleration.

“As long as there is no breach of peace or fire, or a potentially dangerous disturbance of that nature, there protestors ARE NOT under order to vacate from SAPD, and SAPD should not interfere with peaceful protest,” Bono wrote.

According to the SAPD spokeswoman Romana Lopez, officers couldn’t locate a fire when they arrived on scene. On the Current’s Friday visit to the camp, there was no evident damage to the area.

“It was something you could have poured a water bottle on or stomped out,” Kazi said.

Even so, the campers dispersed shortly after the incident, fearing SAPD might come back with arrest warrants, he added.

The run-in with local police isn’t the only difficulty Camp Cicada’s experienced.

In late July, a group of 20 or so masked individuals claiming to represent the neo-Nazi group Patriot Front harassed sleeping protestors and knocked down tents. In video captured by ICE San Antonio, the group stood in the street chanting nationalist slogans and waving flags.

While Occupy ICE San Antonio remains cautious about more run-ins with the law, Kazi said the group won’t cave to outside pressure.

“It’s a sacrifice and commitment to sleep out here, day in-day out.” He nodded to the ICE building and its chain link fence. “But that’s fucking nothing to what people inside that building are experiencing.”