Off-campus Study Spots in San Antonio That We Love

Hitting the books is an inevitable part of being in school. At any given time, you are probably going to be engaged in some type of studying or at least telling yourself you should be studying. Campus usually has some great resources, but to keep you from burning out in the same dim corner of your school’s library, here are some of the best homework haunts in town.

If you thought for a second that the Pearl would fail to be included in this comprehensive list, then you had another thing coming. Sure, we always speak highly of the Pearl and squeeze it into most every list we can muster, but that’s not without good reason. The Pearl is a phenomenal multi-use public space with free WiFi and several notable nooks and crannies where you can leisurely open up your laptop. A friend of mine, a UTSA student, enjoys posting up at Local Coffee on Saturdays during the farmers market. This setup is perfect for when you want to tackle your to-do list while enjoying yourself. It also makes for great people watching. Personally, I prefer doing work at Bakery Lorraine because it always seems less crowded, but you truly can’t go wrong at the Pearl. If you’re planning on doing some deep reading and notetaking, bring a blanket, some snacks and stretch out on the lawn across from the food hall, officially known as “Pearl Park.”

Any public library is going to suit your needs when you need to hunker down and crank out 1,000 words by 10pm, but the downtown Central Library tends to rise above the rest in its appeal. Why wouldn’t you want to do research in the very building that San Antonio native Robert Rodriguez featured in the massively culturally important film Spy Kids 2. The library has a lot of space, resources and study rooms that are ideal for working on group projects during finals season when campus libraries are too chaotic. Plus, its post-modern architecture contributes to a much-needed feeling of sophistication when you’re slogging through hour three of exam prep.

On a VIA Bus

Something that I have tried to integrate into my life is picking up a book whenever I have idle time versus anxiously scrolling through Twitter. This not only decreases my anxiety but also breaks up my reading and serves as an effective cushioning practice against staying up all night to cram. If you have a longer commute, or are waiting for appointments or classes, put your textbooks on day mode and crack them open.

Central Library may have celebrity appeal, but have you been to Landa? Located in the historic Monte Vista neighborhood near Trinity University and UIW, Landa is surrounded by shady oak trees and beautiful homes. It is essentially a converted, early 20th-century mansion that has become the background for many quinceanera, senior-class and wedding photos. Its stucco and stone-tile beauty and coziness compensate for the fact that Spy Kids 2 was not filmed here. It’s the perfect study spot for a rainy day when you want a quiet change of pace. 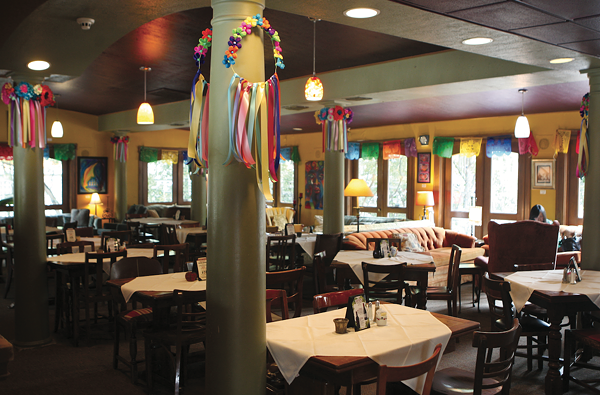 Even though the St. Mary’s Strip is more famous for its nightlife than its academic reputation, here you’ll find Candlelight Coffeehouse, the place you go when you’re trying to turn studying into a study date. The romantic living-room feel of the shop makes it easy to get comfortable. Quiz your crush on one of the many vintage couches that have probably been around since the institution was founded in 1995. After you’ve put enough work in, take advantage of the bar and split a hard-earned beer or soda.