Off the cow for now: Green Vegetarian Cuisine's restorative power 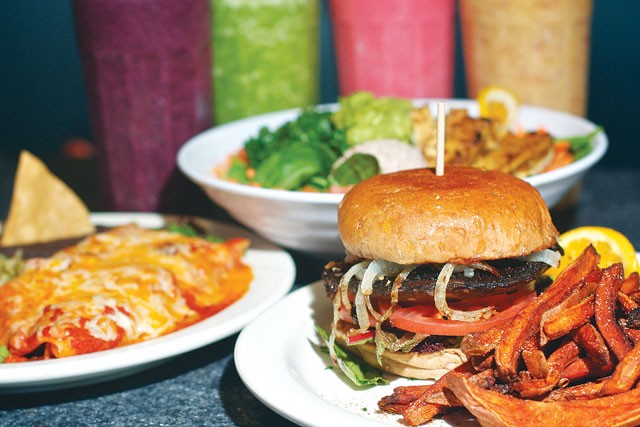 As a devoted omnivore and newcomer to San Antonio, I passed on familiar garden greens for many a month in favor of exploring the many meat-vending outlets here in Tacolandia, munching my way through neighborhood offerings of barbacoa, carne asada, and menudo until my own tripes rebelled. Vegetable cravings set in, so I set out for Green Vegetarian Cuisine, SA's first in recent memory vegetarian restaurant (and certified kosher, to boot), for what I assumed would be one restorative meal. After passing through the kitchen garden that introduces diners to Green's original North Flores location, the door opens to a long high-ceiling set of rooms that, echoing strains of Hank Williams and other classic country crooners, intimates Tex-Mex or cowboy grub may be waiting. Nix on the cow, but there's plenty of Tex-Mex (minus the usual animal protein), part of the heritage of the Behrend family, SA restaurateurs who founded Green in 2006 after purveying chicken fried steaks at Lulu's Bakery and Cafe and similar choices at the Jailhouse Cafe before that. But hoping for a quick stomach scourge before resuming my carnival, I opted for the Protein Salad, a severe-sounding bowl of kale and spinach, dollops of raw pecan hummus and quinoa tabouli, chickpeas, veggies, and roasted tofu. Pass on the homemade dressings available, and refrain from tossing this salad. Play it as it lays, and enjoy a set of micro-courses that are surprisingly satisfying in their contrasting textures, and though subtle to the palate, quite balanced in taste. Proof of success — I started planning my next visit immediately.

Round two, the Portabella Burger. In other establishments, this is often a whole cap on a bun, an imposing bite, but Green serves sautéed strips of large 'shroom with BBQ sauce instead. A much better option, and downed easily, though the hot chopped onions that topped it off were a bit plentiful. Still, a hesitant nod yes to this one, too. But only because I tried it to-go; the too-dry bun steamed over the hot stuffings, pulling the ensemble — which is texturally discordant at the table — nicely together.

Finally deciding to try the Tex-Mex, I decided to defer to what fellow diners were choosing most that day, and go with the same. The daily specials always attract attention, and for good reason. These aren't discounted meals, but special attempts from the kitchen. The mole enchiladas could have arrived from a New Southwest kitchen in, say, Scottsdale or Santa Fe. Made with 20 different ingredients, including chipotles and pecans, the dark mole was exceptional, a virtuoso Texan version of the Oaxacan sauce that appears in hundreds of subtle variations. And I didn't miss manteca in the refried beans — a blend of black and pintos that nicely balanced the scented rice on the side of the two zucchini and carrot stuffed enchiladas. Meals are filling at Green, but come back to try their smoothies. One of the most popular, I was told, is the Blue Healer, made of an improbable blend of blueberries, bananas, soy milk — and spinach. I expected a sour taste, but only a hint of chlorophyll came behind the dominant berries. Green also has a location at Alon. Though with the same menu, they offer baked goods, too. Maybe next time.