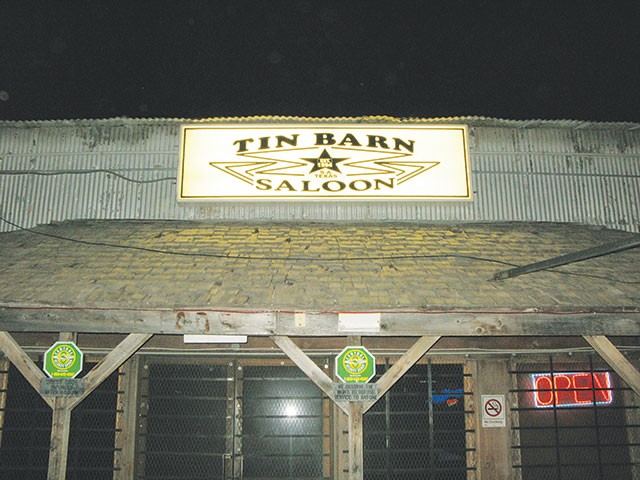 I wasn’t supposed to end up at the Old Tin Barn Saloon as I biked home from the Tejano Conjunto Festival with my husband. But as we crossed underneath the highway on the last leg of our journey, a blinking arrow sign straight off the Vegas Strip circa 1965 beckoned us in. Passing a parking lot full of pick-up trucks, and a homey wooden porch with a real life-sized windmill, we found a roadhouse-meets-cantina, a diamond in the rough.

Established in 1994, Old Tin Barn Saloon isn’t a new joint, nor is it in a sexy part of town. In fact, it’s situated in one of downtown SA’s last true industrial neighborhoods on the corner of Colorado and the I-10 W access road. It does look a lot like a barn, though, with scruffy metal cladding outside and a bar roomy enough for two floors, a pool table, and a DJ booth inside. The amusing décor features your usual wagon wheels and longhorns, plus a taxidermy tableau of a giant buck head seemingly leering at a quartet of doe busts sporting Fiesta headgear. I could get comfortable in a place like this.

“Are you guys … tourists?” asked our puzzled bartender when we ordered our Lone Star longnecks ($2). They’re not necessarily used to new faces around the Saloon, you see, as on both our visits the bartenders informed us that this is a mostly regulars hang-out. That being said, the atmosphere is very friendly in this beer bar (well, they also carry Smirnoff Ice and some sodas), particularly if you’re a sports fan.

While our initial visit late on a Saturday night was subdued, despite the presence of a DJ, the bartender noticed us eying the projection-screen television on the east wall, and mentioned that yes, they will be showing the Spurs games, and hey, they’ll also have free barbecue. Done and done.

While we would have loved to come back for the happy hour deals from 4-7 p.m. ($1.75 domestics, extended all day on Thursdays), we weren’t able to make it until around half-time of the Spurs v. Grizzlies messy Western Conference game two. We found a much more lively scene than the previous Saturday night. Happy hour or not, a $5 tab for a Dos Equis and a Lone Star did not seem like a huge imposition. Prices this low often indicate cash-only, and that holds for the Tin Barn, although there’s an ATM inside.

The regulars were out in force to root for the Spurs. Bartender Kayla Scott says most of the Saloon’s patrons work for the City’s police or fire departments (so don’t even think about looting the joint), or from nearby businesses like the Glazer’s distributor. Another Tin Barn employee likened the crowd to Cheers, and there was a familiar, affable vibe among most of the fellow drinkers. The owner of MK Davis, apparently one of the regs, bought a round for the house during a particularly uplifting moment in the third quarter. Scott says that’s pretty typical behavior among all her repeats.

So close-knit are the folks here that, fairly often (about every two weeks), regulars pool their money and cook tasty barbecue on an outdoor grill that’s offered to everyone gratis. Unlike most free bar food, this is stuff that’s actually worth eating, like the spicy chicken and smoky sausage offered to us on our visit.

Perhaps the most alluring aspect of the Old Tin Barn Saloon for me is that, outside of the Spurs regular and post-season, they reportedly show Texas Rangers baseball games. I’ve lived here for four years now, and had yet to find as laid-back a neighborhood hangout spot with decent TVs reliably airing my beloved team’s games.

Personal sports preferences aside, the Saloon is the kind of place Homer Simpson or Cliff Clavin could head to once the clock hits quittin’ time, as opposed to the kind of place you go to see and be seen on a Friday night, and there’s nothing wrong with that. It’s a male-dominated watering hole, with cute and competent bartenders, simple offerings, a giant TV (plus three high-quality smaller ones), and a lot of room to stretch out. Sometimes that’s all it takes to keep happy customers coming back.