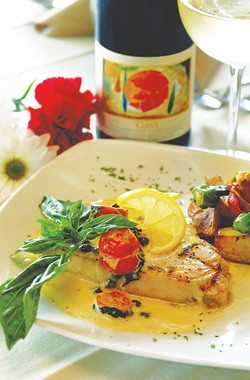 
Our eyes met over the oysters.

This wasn’t a romantic encounter (and I wouldn’t be telling you about it if it had been), but rather a mutual what’s-going-on-here? moment. The oysters in question were Valentino’s “Ostriche Amalfitano,” “a delightful combination of sautéed oysters, Italian spices and a moscato cream sauce.” What the bowl looked like was a very creamy stew of very tiny oysters — not exactly the appetizer we had been anticipating. Expectations will get you every time — but expectations do work both ways. While we both agreed that the oysters would be far better presented if returned to the half shell with a modest amount of sauce napped (fancy gourmet word) on top, we also both admitted that the copious sauce was far less sweet than the moscato wine might have suggested, and that it did, despite a dearth of recognizable “Italian spices,” make for fine, if indulgent, bread sopping.

Our eyes met again — this time with an added smile — over the funghi ripieni that had been suggested by our waiter. (One of the many; Valentino’s does not stint on staff.) Picture this: a square plate generously covered with lemon-butter sauce, one small, crab-stuffed mushroom cap in each corner, a pile of greens in the center — in turn topped with a sliced tomato and a briny Italian pepper. Even if there had been adequate lemon in the butter sauce, it does not a match make with greens, and the pepper was totally out of sync with the very bland stuffing. Bigger mushrooms, more-seasoned stuffing, a different plate (but no greens) … You can’t just throw ingredients at a dish and expect it to work.

Though, sometimes, more is actually more, as in the case of the Meshiwya salad. Google gives up on the odd title (“everything’s great,” as the menu suggests, does not appear as an option), but despite being told, in addition, that the nut-crusted salmon topping the greens has been “grilled to perfection,” the salmon actually was not overdone, and the combination worked nicely. Google throws in the towel again on “salccina,” the menu’s apparent term for a dressing (it’s called salsina in the online menu), but the nutty blend serves its purpose in spite of oddball orthography. A split insalata di Cesare was also nicely done on another day, if the croutons did taste like repackaged goods.

Playing fast and loose with terminology is one thing, but caution should be used when taking liberties with classic recipes. Valentino’s prepares saltimbocca two ways — one with chicken and one with the classic veal. Neither will be all that familiar to local diners, due largely to the addition of spinach and mozzarella (turns out there is an alla-sorrentina rendition that uses mozzarella, though it’s baked with tomato sauce). Though I didn’t find any with the two extra ingredients, chicken versions do abound on the web, including one from Italian food babe Giada De Laurentiis. Maybe the chef, who was formerly at Sorrento Pizza and Restaurant on Broadway, is having his own way with it — which is fine when it works. My suggestion: 86 the sweet Madeira sauce in favor of one made with dry white wine. Not only is it more traditional, but it would be less cloying. An excessively sweet sauce diminished an order of otherwise intriguing ravioli “tuscani” as well. A brown-butter shallot sauce was indicated, but what was served one day was more like the menu’s mushroom Marsala sauce with shallots tossed in. The mushroom-stuffed pasta surrendered without a fight.

Pappardelle, the broad noodle often paired with rich sauces such as wild boar, is here titled Papardelle Marco Polo, and said to be served with a “delicious spicy Rosini sauce.” (Google gave up on this one, too.) In this case, Rosini is not the traditional accompaniment to tournedos Rossini with demi-glace, truffles, foie gras, and the like, but rather a creamy tomato sauce — and not a spicy one, despite an admonition both in the menu and from our waiter. One of our waiters. Gotta say that it was a little sweet, but not at all unpleasant. The pasta was cooked to the proper point, there was a copious amount of mild sausage, and dabs of goat cheese enriched the whole — though they would have had a greater impact with some spice to play against.

Fish is perhaps even more of a test of a good kitchen than pasta, and Valentino’s kitchen turned out a Swordfish Amalfitano that was perfectly on point: It tasted fresh, and the texture was appealingly firm. There was much to like in the “satin Sauvignon Blanc” sauce, too. Way too much, in fact. It flooded the plate, submerged the sautéed squash side — certainly suffocated the few capers that should have been more prominent — and dominated the fish. Some nicely sautéed cherry tomatoes survived by virtue of being above the flood crest. Now, to attempt to be fair here, I suspect the kitchen thinks it’s being generous, not excessive, but the line is not such a fine one: Put on just as much sauce as the main ingredient needs — no more, no less.

It’s clear some (possibly excessive) bucks have been blown in the building of Valentino’s as well. It’s a little hard to get a sense of the place at first glance; it wanders around from bar to outdoor seating to private rooms to a kind of core with a direct view of the (relatively) open kitchen. It’s all pleasant enough without being in any way distinguished. Bucks, but not bang, in other words. The charming owner, who was making table rounds one evening, admitted readily that she had a dream but no experience, and I truly hope the dream wins out. One suggestion might be to have whoever (in-house or out; I forgot to ask) makes the hazelnut Marsala roll take a critical look at the menu. There might have been a little too much whipped cream, but that’s truly quibbling. The Marsala was present but not overwhelming, the hazelnuts came through loud and clear, and the roll was delicate and almost ethereal. Our eyes met over the dessert, too, but this time there was no sarcasm in the gaze. •