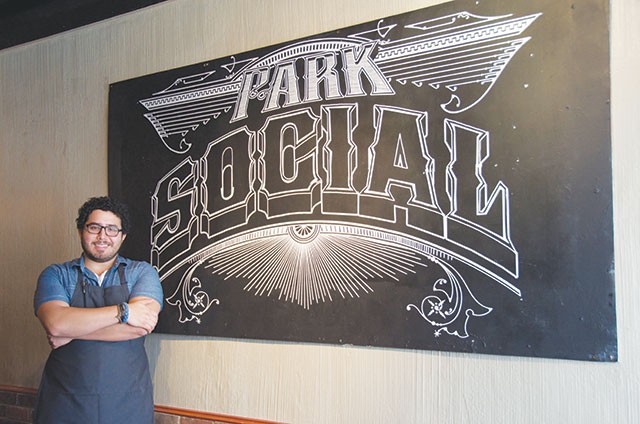 Sure, there are plenty of ways to get your drink on around Olmos Park. Grab a brew at Bharmacy, a mixed drink or two at the Thirsty Camel, sangria and ’tinis at Tribeca, margs at Panchito’s and Marylou’s, and vino galore at Chez Vatel, but the area’s been dry in one respect—classic cocktails. But that will change very soon as the folks behind Folc roll out Park Social, the next phase of their three-joint project inside the former Ciao Lavanderia, within the next few weeks. And it’s 26-year-old David Naylor’s turn at this cocktail lounge’s well.

Naylor, who met his Folc/Park Social/Alumina partners through the Texas Cooks’ Co-Op, a chef’s collaborative dining group, will man the bar’s program solo at least to start. But he’s bringing more than five years at the shaker to Park Social, an intimate space that still holds a few remnants of its Ciao days, where he’ll serve classic cocktails with a twist.

Naylor’s bartending history starts at age 20, when the San Antonio native catered to dance-happy Stone Oakers at Coco Chocolate Lounge & Bistro. After a year there, he made his way inside Loop 410 and worked under Olaf Harmel at Bar Du Mon Ami. This helped reel Naylor into bartending as an art form.

“It all kind of started with a drink made by Olaf … I had stumbled into Mon Ami after going through the telephone booth and the very first drink he made for me was a Vieux Carre,” Naylor says of the New Orleans classic made with equal parts whiskey, cognac and sweet vermouth, along with Benedictine, Peychaud’s and Angostura bitters. “I never really knew cocktails could be so layered and complex—it opened my eyes.”

Naylor later made his way to Sustenio inside Eilan where he’s spent the last two years, while also doing occasional stints at Dorçol Distilling. The self-described six-year sophomore (Naylor still hopes to earn his bachelor’s in business from University of Texas–San Antonio someday) is the consummate student, taking on stage shifts or internships locally at area faves such as Jeret Peña’s Brooklynite and elsewhere. He recently completed a brief stage at Chicago’s Aviary, where he worked with sous chef Micah Melton and ice chef (yes, an ice chef) Hope Clarke. The bar’s beverage director, Charles Joly, was named the Diageo World Class Bartender of the Year this summer. It’s a pretty BFD.

“Going to the Aviary taught me how to streamline [my process],” Naylor says of the lounge, where tasting menus are encouraged, and it’s not uncommon to find a $30 cocktail.

As for what Park Social’s program will look like, patrons can expect a healthy mix of cocktails that draw inspiration from his previous experience and other local joints.

His nod to Peña, for instance, comes via the Cinco Missions, a take on BKSA’s Missionary No. 1 with Cinco Vodka and grapefruit juice along with hints of mango, balsamic and cucumber. Naylor’s also adding personal favorites such as the savory Il Pomodoro, his take on a bloody mary, with Dorçol’s Kinsman Rakia, tomato passata (or uncooked tomato puree), dry vermouth and bitters. A tamarind nut, Naylor is also adding an Isle of Tamarind made with tequila, tamarind syrup, a Serrano pepper shrub, lime juice and beer.

Guests (and who will make up the potential clientele of Park Social is still up in the air), should also look forward to darker, boozier spirits filed under the “Night” section of the menu.

“If I could pick one spirit that I absolutely have to have it’d be a smoky whiskey or Scotch,” Naylor says.

He’s hoping to incorporate Balcones Distilling’s Brimstone into the Smoke ’Em cocktail that will include sarsaparilla for sweetness and tobacco bitters; and he’s already using a rye for his take on an Old Fashioned with scorched caramel syrup and bitters (this and the Cinco Missions have been available since Folc’s preview opening a few weeks ago).

Finally, for those looking to expand their breakfast cocktail options (and really who isn’t getting sick of basic mimosas), Naylor’s hoping to spice things up by serving a Satan’s Whiskers ’tail with gin, orange juice, bitters and triple sec, plus sweet and dry vermouth (“it’s really quite light,” he says), and eventually three iterations on the bloody mary starting with a standard red which will draw bitterness from balsamic instead of pickle brine. Recipes are still being tweaked for a tomatillo bloody and a fruit-based bloody. Our interest is definitely piqued.