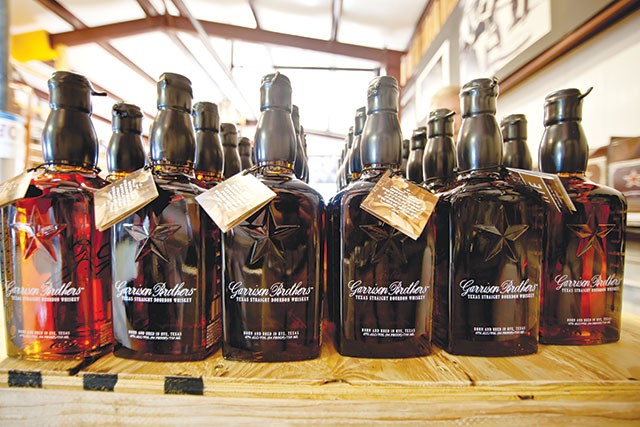 Sorry, Kentucky, but you don’t have a lock on bourbon. America’s special spirit can be made from sea to shining sea—it only needs to be at least 51 percent corn (the rest being wheat and/or rye and sometimes barley) and aged in new, charred oak barrels to be card-carrying. A quick mosey down the brown spirits aisle at any well-stocked liquor store will accordingly amaze and astound: I counted eight Texas bourbons in one Spec’s—more if we include carpet-bagging booze that may be made in bulk elsewhere and sent to Texas to be bottled under a Lone Star label. Of them, I tasted five–first neat, then with two drops of water from an eyedropper.

My bottle of .36 Texas Bourbon Whiskey from Ranger Creek is inscribed as batch No. 6, summer of 2011. Aged in small casks (which mature the spirit much quicker than larger barrels) “under the Texas sun for nine months,” it’s part of RC’s Small Caliber Series, bottled at 96 proof in .375 ml containers. Head distiller TJ Miller claims vanilla, brown sugar, caramel and toffee as major flavor and aroma components—to which I’d add a serious spiciness, perhaps the result of a large portion of rye. A couple drops of water turn this into a real sipper.

Calling itself “the first and oldest legal whiskey distillery in Texas,” Garrison Brothers’ impressive Hill Country facility is situated within easy striking distance of San Antonio. I admit to not cottoning up to their Texas Straight Bourbon Whiskey at first, finding it a tad too Texas tough. But I have since come around; far from slavishly aping a product from the Kentucky Bourbon Trail, the brothers have created a true, regional spirit. A little water also levels the profile out a bit—and the stuff makes a mean, if expensive, Manhattan.

At around $25, the light-bodied Red River Texas bourbon whiskey was the cheapest of all tasted. There was the expected spice and caramel—but there was also a kind of pickle barrel component which fortunately dissipated with water. Use this one in cocktails.

Moving up a small notch on the complexity scale we find Austin’s Red Handed Bourbon Whiskey from Treaty Oak Distilling Co. These folks admit that they have rustled up “our favorite barrels from across the country” which they blend and age here in bumper-sticker fashion. (“I wasn’t born in Texas, but I got here as quick as I could.”) Not all that outstanding straight, it does develop pretty crème brûlée notes with water.

Last but far from least was the 92 proof, small-batch Texas Bourbon whiskey from Herman Marshall Distillery. Full of creamy butterscotch with dried fruit and nuts, the appealing HM would make a good entry into the world of Texas corn-based whiskey.

Is Kentucky quaking yet? Buy Texas and make it happen.