On the Rocks: The new gin & tonic 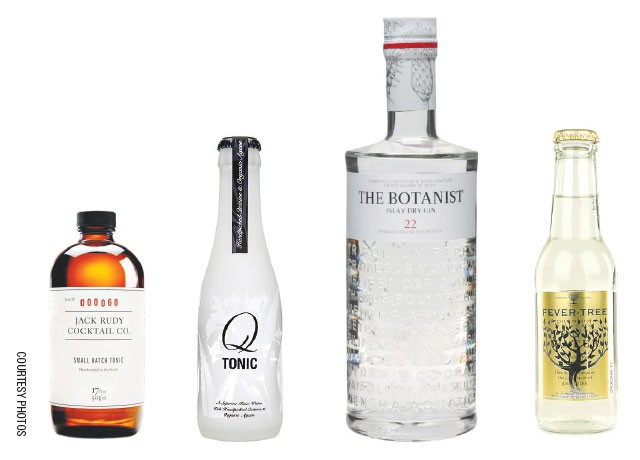 In the latest Details magazine, a men’s cologne called The Architects Club is described thusly: “When you spray this on you’ll be hit by vanilla with the second layer kicking in a minute later—like a well-made gin and tonic, it carries notes of juniper … and essential lemon oil.” At $190 per smallish bottle, I think I’ll take my G&T the old-fashioned way—orally.

Even the flossy style rags will admit that there’s nothing wrong with the classic: a couple ounces of Tanqueray, a squeeze of lime and some slurps of tonic (Canada Dry is fine—but no diet and only from a single-serving glass bottle) all stirred with ice. But why stop there? The emergence of new, artisanal gins, along with their counterparts in tonier tonics, means the combinations are now almost endless. For this article, I started with a favorite gin, Plymouth (in both standard and higher-proof “Navy” strengths), and played with three reasonably available upscale tonics plus a tonic syrup, Jack Rudy’s, mixed with Topo Chico.

Plymouth plus Q tonic, made with agave syrup, was the cleanest of the bunch; Q let the gin shine through, and was especially good with the Navy-strength. English-made Fever Tree tonic water, just a little more complex-tasting, was nevertheless my favorite, creating the best balance. (It’s also the favorite of Don Marsh, at 1919, who adds a couple of jolts of Angostura, or orange bitters, to his G&Ts). There must be a gin out there that likes the Fentiman’s, but Plymouth isn’t it; the stuff is just too aggressive and citrusy. The Rudy tonic syrup (there are several others available, including Tomr’s and Liber & Co.–Karl Schwender at Bite uses this one), came in third, showing more orange but allowing the user to adjust intensity by using more or less in proportion to the sparkling water.

Of course the industrious (or the just plain obsessive) can make tonic syrup from scratch. OK, yes, I did it, from a recipe I found in the New York Times—though there are others online. Just be sure to use one that calls for chopped, not powdered, cinchona bark, the essential quinine element, for filtering reasons. The result will be bark-colored, but that just adds to its handmade charm.

The essential flavoring element in gin is juniper berries, plus any number of other botanicals. Kegworks will sell you a $50 kit, juniper and botanicals included, to make your own—but don’t go there. Experiment instead with the huge variety of new-age gins now on the market, Scotland’s The Botanis being a current favorite. And then play with add-ins to your basic G&T. A couple of possibilities include muddled cucumber (and even ice cubes made from juiced cukes), and substituting 1/2 ounce St. Germain for a portion of the gin. If you can find them, fresh makrut lime leaves are also great muddled–no lime squeeze necessary. Now all you need is a deck and a breeze.