It was a week of changing perspectives.  Road trips often have that way of rebooting one's personal computer.

As always, to the letters...

From the desk of Elray came this announcement...
WHO:  UTSA New Media Studio WHAT:  2nd Annual End-of-Year Screening & Exhibition WHEN:  Friday  May 2, 2008 screening begins at 7pm; exhibition open all day WHERE: UTSA Buena Vista Theater and Assembly Room, Downtown Campus COST: Free GENERAL CONTACT#: 458-4352 PRESS CONTACT#: Leslie Raymond 316-4598 Still riding high off their Luminaria success, students from the UTSA New Media Studio are holding their 2nd Annual End-of-Year Screening & Exhibition at the UTSA Downtown Campus.  Premiering on screen are a dozen new single-channel videos including both narrative and documentary works, with a heavy emphasis on experimental.  The new audio-visual performance group “Big Medium” will make their stage debut tonight-- do not miss the fun as Utah Snyder and Michael Stoltz (who some may know as the Deluminators) jam on turntables and electronic instruments with Alyosha Dotson on the VJ mix.  Also on display are ten new media art projects in the Buena Vista Assembly Room.  These works make use of the moving image in innovative ways, incorporating multiple monitors and video projections.

For those that recall, OTS had a few fotos from this UTSA show at Luminaria.

It seems the moped talk of last week spread across the country...and the world.  Occasional OTS Reader Nida sent in this letter from the depths of Brooklyn...

With the title "Awesome Carving" came this image... An anonymous reader new to the "magic" of On the Street sent in a link to a website we evidently should be aware of.

On the Street Insider "Tops" sent in fotos from the Main Plaza Grand Opening.

Here is sample of the fun that was shared.... 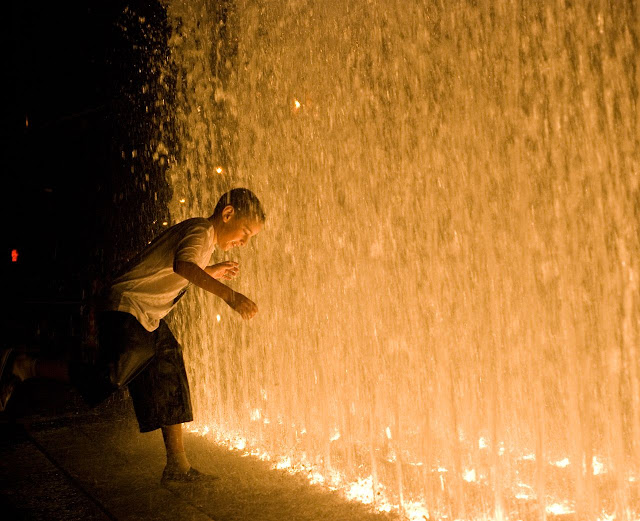 Occasionally, tangible letters arrive as well.  Here is one that was very well received. A knock on the door and then this orphan. The two free samples from Tillamook finally arrived.  This will help greatly with the pizza making habit.  And as an extra lagniappe, two hi-tek cold storage packs for use in later endeavors. From the West Coast to the Third Coast...


March to the Sea This trip began at Beer N All for supplies.  The parking lot is full of hangers-on.  It's sort of like the kind of dudes who hang out in the kitchen at a pizza parlor discussing the latest grimecore album.   The vibe seems appropriate for the beach, which was appropriate for the week. Here, hidden behind the absinthe bottle is a surreal ad for Beer 'N All that came with the drinks.  As Rupert Murdoch is to media, Beer 'N All is to liquor sales. This is actually a view leaving the Coast but it makes more sense in the beginning.  Technically, this is the JFK Causeway.  I'm not sure of his connection to all this.  Sandy knoll jokes would be appropriate here. For those who couldn't make it out on the Barf Cat, the pier offered a more stable, leisurely way to go about things.  Notice, the white plastering on the top of the lights.  A foreshadowing of a showdown with some pelicans the next day. This residence has been documented many times, perhaps even a year ago when On the Street went On the Beach the first time but its worth noting again for its industriousness, clean lines, and other words architects might or might not use. From this same angle a year ago rain and wind attacked the island.  This year it was nothing but good times. A look out towards the jetty aka La Jetee.  The culprit makes a first appearance. A view of the bridge/JFK Causeway that connects the island to the mainland.  This view was taken from a neighborhood with occasional gardens and retirees walking around with very little sun protection. This shack/store gets great local reviews.  It's actually on the access road. The person running the place was a salty Vietnam veteran.  I'm not sure if his name was Wanda. (The absinthe still haunts from the background.) A whole Red Snapper for less than $10.  It seemed like a fair exchange. Later, a visit to Dragonfly, supposedly one of the best restaurants onn the island.  Here is a plate of escargots with puff pastry competing with a few slices of bread.   There is a general French approach to things, nonetheless the mood is completely casual.  Tommy Bahama shirts are not required but nor are they frowned upon. And finally on the beach.  The setting sun and cool breeze combined for a dramatic mood. Seaweed (aka sea nettles) were everywhere.  As were the birds (aka pelicans.)  They may have excreted upon us but it was nothing that briny saltwater couldn't try to solve (though the stain remained.) In the distance...a boardwalk.  On the right were several structures for people to set up shop.  It was amazing to see the city come together in a common space.  At one structure, a family playing with the frisbee.  In the structure next door, a whole different reality.  Kids drinking beer while standing on top of the roof rapping at each other.  Anything seemed possible, and everything seemed accepted.  It was a sandy zocalo. More award winning fotography from OTS from under the boardwalk down by the sea. And finally, the sun set.  Memories embedded themselves into fissures in the brain, or whatever. And so goes another week on the beaches of Texas.  As always, to be continued...