One hundred years of art at the San Antonio Art League

August 04, 2012
comment
One hundred years ago, with San Antonio on the verge of becoming a bustling metropolis, the San Antonio Art League was born. Since then, Art League members have acquired more than 450 paintings and other artistic works, and supported the development of art in San Antonio with competitions, lectures and patronage. As a result of their astute choices for annual additions to the permanent collection, they have a distinguished compilation of works. If you look at the collection as a whole, it reflects a hundred year history of art trends and artists working in Texas and beyond.

Portrait of Mrs. Ethel Drought by Rosamund Niles-1931 In 1901, Henry and Ethel Drought built their large Atlee B. Ayers designed home on a historic piece of land on what is now the campus of Providence Catholic School--located at the corner of Brooklyn and St. Mary's. There were already several small societies which were gathering in support of arts and culture in San Antonio. Mrs. Drought was instrumental in fostering a salon environment in her home where artists, art connoisseurs, musicians, and other patrons of San Antonio culture could meet. In 1912, Mrs. Drought, with other community artists and art lovers, brought together these smaller groups and the Art League was formally founded. Mr. W.L. Herff was elected the first president, with Mrs. Drought as first vice president. For her continued leadership and dedication to the organization throughout her life, Mrs. Drought is considered the founder and honorary life-president of the Art League. The Art League became a nonprofit in 1926. At that time the Art League was formed, there was no place to exhibit paintings and other art works in San Antonio. So, the League met and began displaying its paintings in the Carnegie Library Hall in the downtown area. The very first painting purchased was Sun and Mist, by prominent female painter Charlotte B. Coman. The League continued to pursue and purchase art with a discriminating eye. That the members—past and present--are able to recognize significant art works is one reason their collection is of such value in historical and artistic terms. 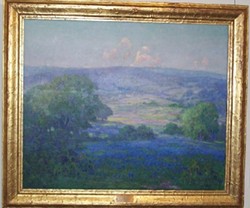 Next came painting acquisitions by artists Julian and Robert Onderdonk, Jose Arpa y Perea, Mary Bonner and William Merritt Chase. During the years 1926-28, the League held the Texas Wildflower Competitive Exhibitions, spearheaded by oilman and Texas art lover Edgar B. Davis. The competitions brought in hundreds of artists’ submissions and the Edgar B. Davis Collection took shape. This collection really put the San Antonio Art League's influence and importance on the national map.

Mr.Pluto by Susan Brumfield Farris Onderdonk Prize Winner 2010 In 1927, the Art League began a 40 year partnership with the newly created Witte Museum and its curator Miss Eleanor Onderdonk . Here, they were allowed to exhibit and store their growing collection. At the end of World War II, they added the Artist of the Year and Onderdonk prizes, and eventually, an art student prize to their competitions. In 1973 the League and all its fabulous art works moved to the Koehler house at 130 King William Street, which coincidentally was originally constructed the same year as the Drought House. It would be a disservice to try to describe any further the collection. You just have to go to the museum and see it. And, get a docent to walk you through. Nancy Kempf served as an excellent guide when we toured. Spring for the $10 to purchase the "Century of Art and Community" book by Jacqueline Edwards. I used this book and Ms. Kempf as references. Go to the League's website for a full catalogue with visuals. If you're wondering my emphasis on Mrs. Drought--every day I go to work at Providence, I sit in the attic offices of the beautifully refurbished Drought House--now call the Najim Campus Center. I sometimes think about Mrs. Drought and her love of  the arts, her intellectual drive, and her ambition to be a women of action and innovation and felt compelled tell her story. Photos of pictures used by permission of SAAL San Antonio activist and nonprofit veteran Laura Carter believes in enabling the community to work from the heart, not just the wallet. During her time at the San Antonio Area Foundation, Laura implemented new technology, managing website design, social media and content for all published materials. She is currently Communications Director at Providence Catholic School helping young women become Leaders, Learners, Women of Faith and Justice.