One if by land, two by sea 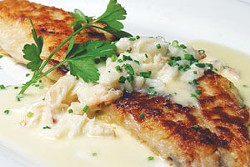 
Larry Foles and Guy Villavaso, the duo behind upscale seafood chain Eddie V’s and Z’Tejas Southwestern Grille (which they sold in 2007), opened up two new restaurants in San Antonio last year during the last of the boom days: Wildfish Grill and Roaring Fork.

In the late ’90s, the partners started Eddie V’s Edgewater Grille to focus on what they saw as an untapped market for fresh prime seafood. While the Eddie V’s moniker is still in operation (and an outlet is still scheduled for the Quarry later this year), the partners have developed Roaring Fork as a mid-range steakhouse, and since 2005, Wildfish Seafood Grille as a top-end seafood restaurant. With the affluent presence around Stone Oak, they decided to locate at 1604 and Huebner. (Brasserie Pavil, reviewed in the Current March 18, is in the same complex).

Sleek, postmodern interiors are hidden behind the fairly banal terracotta-colored brick exteriors. In Roaring Fork the colors are a muted red with black accents. At Wildfish, black and tan dominate. Both feature plenty of natural wood surfaces, exposed ducts, a central bar, and open high-finish kitchens. On either side of the bar, dining rooms seat up to about 150 at booths or tables. Seating is available on large, welcoming patio decks for drinks and even dinner. When we were there, unfortunately, it was windy and a bit chilly, and the patios were empty.

At Roaring Fork, the emphasis is on meat — ranging from a Reuben or burger to a 22-ounce ribeye at $39 —although the menu does offer salads, chicken, and modest fish dishes, and smaller steaks are available. Like most steakhouses, Roaring Fork serves a la carte, with sides at $7 per. If you’re eating alone there’s no way you can finish a side, and a foursome is needed to do justice to the delicious Green Chile Pork Stew. A couple of late diners enjoyed the stew and draft beers; maybe not a nutritionally balanced meal, but filling and economical.

Lunch with a glass of wine is $20 to $30 ($40-$60 at dinner). You’ll find a nice selection of California and Washington State varietals starting at $8 a glass, and $30 and beyond by the bottle. The ample wine list also covers vintages from California, France, and Australia. If you’re motivated you can find some gems in the $50-$100 range. In addition to the usual white wine, the generously poured mojitos and margaritas were selling briskly at the bar during the 4-7 p.m. happy hour.

When I lunched at Roaring Fork, I enjoyed the rich fruitiness of the Belle Glos Meiomi Pinot Noir from the Sonoma Coast. It was a great complement to the pork-shoulder carnitas, which came with black beans mixed with scallions. The desserts, all made on premises, included a good-looking crème brulee, but I had set my heart on the hot Huckleberry Bread Pudding and wasn’t disappointed. For a guy without a sweet tooth, I didn’t leave a crumb!

Service was good, the atmosphere was warm and relaxing, but in a tough economy one has to ask if San Antonio can support Roaring Fork. Foles has been running restaurants since the ’60s (starting with a turn at Shoney’s), so I wouldn’t bet against him, but a few incentive-priced meals might be needed to fill the empty tables we noted at both lunch and dinner.

Wildfish is a different story. Open only for dinner, the restaurant draws big weekend crowds, but midweek days can be slow. We had eaten there back in the spring of 2008 when the restaurant opened. Service was a little confused, and several dishes were not presented as the menu described, so we wanted to see if the chef and staff had improved. The answer is yes on both counts.

We were welcomed and seated sans reservations. Our request for tap water rather than Pellegrino didn’t raise an eyebrow. Nor did our decision to have the Louisiana oysters to start ($12 a dozen) instead of the North Atlantic oysters at market price ($34). The plump bivalves came with fresh horseradish, cocktail sauce, and a mignonette — all flavorful. From our previous visit we remembered enjoying the tower of iced shellfish (crab, oysters, and shrimp), a veritable stacked smorgasbord, and also recalled it left us a bit full for our entrees.

Our large Fuji-apple salad with endive, arugula, baby lettuces, sugared walnuts, and candied dates in a ginger and sesame vinaigrette was easily enough for two. The only menu fish not available was lemon sole. My Pacific ahi (yellowfin tuna) with sautéed shiitake mushrooms and ginger sauce with a hint of wasabi came medium rare, just as ordered. My partner’s lemon-butter sauteed snapper with Jonah crab claw meat was delicious. The portions were large, probably close to a pound of prime fish. For sides we passed on a previous favorite, the truffled mac and cheese, to enjoy a huge plate of steamed asparagus with hollandaise.

Guests are offered two wine lists, one under $100, and a second that starts there and crests in the $700s. Since we view drinking wine as a frequent pleasure rather than a major investment, for $32 we found a first-rate 2007 Estancia Monterey Pinot Grigio with concentrated fruit (pear and peach were evident) and a clean, flinty aftertaste. The California wines offer a nice choice in the $30-$50 range, with a few half-bottles available.

Desserts at Wildfish tend to be such traditional favorites as bread pudding and cobbler, but they are rich and fruity. We savored the blackberry cobbler with French vanilla ice cream, and if that wasn’t sweet enough it was served with a generous dusting of powdered sugar.

Any disappointments? Maybe the tendency of the staff to push “market price” specials with unlisted prices, but that’s almost ubiquitous at upscale restaurants, so why be a curmudgeon? Service is excellent, food fresh and prepared to order, and the setting warm and inviting. The clientele is mainly couples, 30s and older, and no children were in evidence on our visits.

I’d love to see Wildfish open for lunch, but the prices of prime fresh fish make it unlikely a lower-price menu could be offered, and $150-$200 a couple for lunch is beyond most San Antonio budgets these days.•