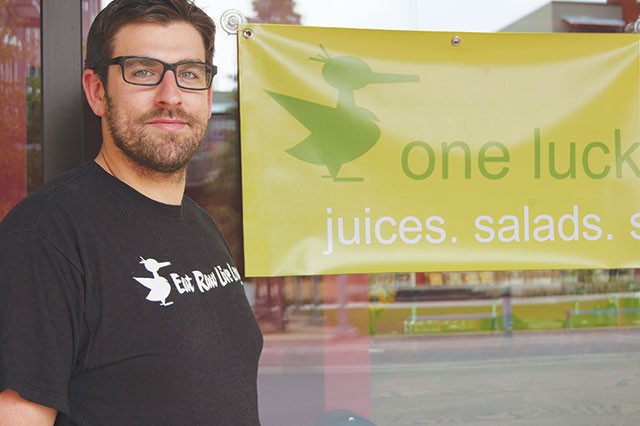 San Antonio, once one of the nation’s fattest cities, recently dipped below the state average for obesity. Still, nearly 30 percent of our population is classified as obese according Metro Health, and many still struggle with diabetes. While we’ll probably never give up our beloved comfort foods, One Lucky Duck owner Noah Melngailis hopes the city will jump on board with healthful juices that can supplement a taco diet.

“When Emily (my wife) and I first got to San Antonio, we gained 20 pounds eating tacos,” Melngailis said. “We are obsessed with breakfast tacos. We still eat them, but we balance that diet with raw foods and a lot of juicing. “

Raw food expert Sarma Melngailis, Noah’s sister, created the One Lucky Duck brand in 2004. She has since expanded to include one of the highest-rated raw food restaurants in the country, several cookbooks and two other Lucky Duck locations in New York City. Raw foods require careful preparation. OLD’s snack labels promise, “Everything at One Lucky Duck is kept below 118 degrees to preserve nutrients and enzymes.”

Noah was introduced to great raw food at his sister’s restaurant while attending school in New York. “I discovered I could mistreat my body while partying in college,” Noah said. “But if I ate a raw food juice lifestyle, I could get away with it.”

He found a passion for raw foods and juicing while running errands and meeting vendors for One Lucky Duck. He moved to Texas eight years ago, where he found success in Austin’s startup business world, but he always came back to food. Melngailis learned the business while working at several notable restaurants, including Andrew Weissman’s Sandbar Fish House & Market.

Noah returned to his passion for raw food and juices last April after his wife suggested talking to Sarma about franchising a juice store. “I knew the only way to make a store like this work was at the Pearl,” said Noah, referencing the new shop’s trendy location.

You can see evidence of One Lucky Duck’s chef-driven menu, which features items like spicy Thai lettuce wraps and a variety of juices and shakes. “All the recipes are created by wonderful chefs in New York City, we use local ingredients and bring it to SA,” noted Noah.

Customer favorites include the Red Ginger juice, a surprisingly delicious combination that includes ginger, beets and pineapple. “Everything on the menu is fresh and made in the store,” Noah said. “Our almond milk and cashew milk are a popular choice for drinks and as part of our juice cleanses.” Unlike most juice cleansing programs that deprive and starve people, OLD juice cleanses provide full meals balanced by juices and milks.

“We wanted to give people healthy options that are delicious and accessible,” Noah said. “I’m glad to be a part of the health movement.”