River Road in the Hill Country getaway of Wimberley winds a short way from a three-way stop in the middle of town down a narrow road to the bank of the Blanco River.

From where it starts in the small city, it's hard to imagine the popular weekender spot for people looking to escape Austin, San Antonio or Houston was devastated by a powerful flash food that killed 11 people in late May of 2015. But when River Road spills gently down a hill to the banks of the Blanco River, numerous overturned, gigantic, majestic bald cypress trees lie cracked and splintered — testifying to the 40-foot-plus wall of water that bulldozed through this valley. A white cross was posted on one still-standing bald cypress. A for sale sign stood a few feet away.

Between May 23 and 25 of last year, historic flooding occurred in South and Central Texas, the worst of which impacted the Blanco and San Marcos rivers. Dubbed the Memorial Day floods, more than 1,000 homes were destroyed or damaged in Hays County — all right before summer, a lucrative season for a town like Wimberley. Instead of a property tax, it earns revenue through sales tax made from tourists perusing the quirky town square during the summer months while visiting a multitude of attractions, like Jacob's Well or Blue Hole Regional Park.

While many places were damaged by this major rain event, Wimberley experienced the worst of it.

And when national and regional media poured in to cover the flood, a depiction of a warzone was broadcast all across Texas and the country. The only problem for Wimberley? That wasn't an accurate picture.

On the fourth or fifth day of the flood, Moreman said she'd had enough of how television news was portraying Wimberley.

"They were saying how devastated the town was," Moreman said, explaining that much of the town square and the art galleries and shops were unaffected. "They got wet on their roofs, but were not flooded. They kept portraying Wimberley as washed away, so people stayed away."

So after watching yet another disappointing news report, she rushed out to where the TV crew was filming and banged on the back of their van as they were pulling away.

"I was hoping they might change their angle. So [the reporter] came and met with me and I think that was a turning point," she said. "They put it on the news. They filmed the town and shops and all of that."

While the national media didn't come back, regional outlets began redirecting their focus toward recovery and support efforts in Wimberley, but the last memory many non-Texans have of Wimberley is of a disaster zone.

"We still get calls where people ask if the shops are OK," Moreman said.

Those media portrayals had a financial impact on Wimberley. The summer of 2015 wasn't what it should have been for the town, though an influx of volunteers, who brought not only expertise and help, but also contributed to sales tax revenue, helped pad the financial fall a bit. 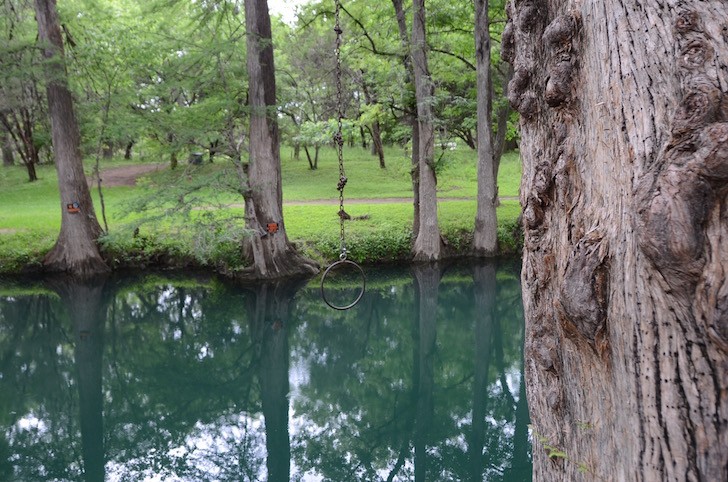 But now a year has passed. And though signs of tragedy still dot the bank of the Blanco River, the city is gearing up for what it hopes is a strong summer with lots of visitors.

"We are very, very hopeful," she said.

And there's a ton of reasons for Moreman and Wimberley to be hopeful.

For starters, The Texas Commission on the Arts designated Wimberley's town square, which holds a multitude of art galleries, restaurants and shops as a Texas Cultural District.

"Wimberley is the smallest one. So it's kind of a feather in the cap for us," she said.

But some of the town's most exquisite attractions are natural, and a great way to cool down during the Lone Star State's brutal summer heat.

The Jacob's Well Natural Area features a natural spring that flows from an underground cave. The waters feed Cypress Creek, which winds its way through downtown Wimberley.

People used to be able to show up and swim as they please, but that's changed.

Hays County now owns and operates the park, and swimmers must reserve a two-hour time slot online with the county to swim. There is also a fee to visit the park now. Adult entry is $9, with a sliding fee schedule for Hays County residents, children and seniors. The artesian well opens for swimming on May 30.

"There are people that come from all over the world to see it," Moreman said. "It used to be a place you kind of knew about ... and the county took over to protect it. So there is limited access."

For more swimming options, visit Blue Hole Regional Park, which is just a short jaunt away from the town square. The 126-acre park features 3.5 miles of trails and a beautiful swimming area shaded by cypress trees. The swimming season is May 30 through September 5.

"Then there's Old Baldy, which is a hill," Moreman said. "It's one of the highest points here. Visitors can gain access to that from dawn to dusk. It's 218 steps to get to the top and you get a panoramic view of the valley."

Summer will also feature theatrical performances, like Shrek The Musical, at the EmilyAnn Theatre & Gardens (1101 Ranch Road 2325). And the Corral Theatre (100 Flite Acres Road) will host outdoor movie screenings. But one of Wimberley's biggest draws is its monthly market days, which are every first Saturday through December.

"And that has almost 500 outdoor booths along shaded walking paths," Moreman said. "There's food, crafts, antiques, household items, all that stuff, and that brings a lot of visitors to town. And that traffic doesn't stop. We just had our best month ever."

Moreman hopes that momentum continues through the summer. Even though the tight-knit community is still remembering the lives that were lost and forever changed by the Memorial Day floods — and some who are still repairing and rebuilding — Wimberley's designation as a go-to summer destination in the Texas Hill Country remains as constant as the current of the Blanco River.