Our Guide To The Garage Rock Party Of Burger Hangover Fest 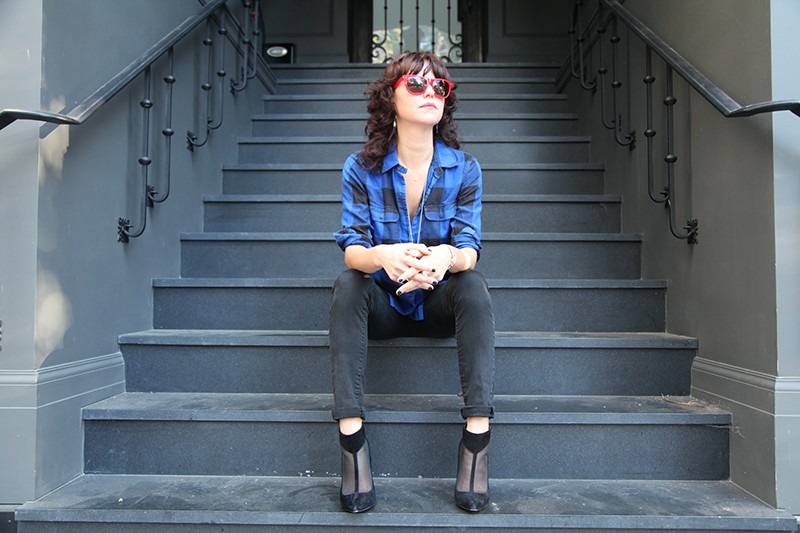 Peep into Burger Records in Fullerton, California and you'll see label owners Sean Bohrman and Lee Rickard working in a fast-forward gust at any hour of the day. Hair to their shoulders, records in hand, the pair works non-stop from the store's all-in-one couch/bed/office/radio studio. Since the store opened in 2009, Bohrman and Rickard have lived among their vinyl stacks, sleeping less-and-less as Burger takes off as the eminent name in garage rock. "I've never seen Sean rest," Rickard joked over the phone.

In 2007, the "overly ambitious" duo founded the label as a home for their band, Thee Makeout Party. As garage bands around the country found an appetite for Burger, the label quickly found a reputation as an artist-friendly home for rock 'n' roll and chewed-up bubble gum melodies.

Bohrman and Rickard never officially sign bands so that songwriters maintain all rights to their music (thus, many of the bands on the Hangover bill aren't officially Burger boys). Burger runs the Weiner subsidiary, pressing music that they "can't make a Burger priority." And they even let Gabriel Fulvimar of Burger band Gap Dream live in the Fullerton store with them.

"From the very beginning, we called ourselves rock 'n' roll philanthropists," said Rickard. "We've invested everything back into Burger, whatever we've made we've put back into the label. And that's why it's grown so much."

After eight years, Burger is also in the concert-throwing business, putting on concerts in LA, the Bay Area and in other satellite cities in the garage rock orbit. Now in its third year, Burger Hangover takes advantage of the South by Southwest spillover effect, asking rock 'n' rollers in Austin to hang around in SA, recover with a michelada and contribute to San Anto's exploding garage scene.

"I'm real proud of San Antonio," said Rickard. "Every year we come back, the Hangover seems to double in size."

A dastardly punk rock quartet from Providence, Rhode Island, Gymshorts dashes through two-minute stories of bong rips and crushing boredom. Fueled on the Prov staples of Naragansett and hot wieners, it's only appropriate that the band signed to the Wiener subsidiary of the Fullerton label.

The boys of Vision grew up together in East Los Angeles garages, playing the stuff that would become their debut cassette on Burger. That long history may help the band stay tight-knit and simple on songs like "You Should Know," letting reverb and a few choice words take the forefront.

Earlier in March, The Bolos dropped the Mercy E.P., five tracks of whisky-kissed San Anto rock 'n' roll. Guitarist Thomas Knieren and bassist Osita Anusi trade blows through the effort, as the band pours the fuel of their influences into an engine of V8 blues punk. On "Rattler," The Bolos drive through the hip-shaking "I Want Candy" pop shuffle of the '60s, beating the rhythm into the road with a heavy foot.

For her debut album on Burger, poet Sarah Bethe Nelson applies her writer's eye for detail to the forms of pop songwriting. On the achingly slow "Paying," Nelson structures a breakup ballad around a common experience

among the drinking youth — getting free booze from your friends working the bar. "This is the last time I'll be making your drinks on the house," Nelson sings with melancholy and a turn-of-the-knife tone.

The title cut on Fast Moving Clouds picks up the pace a little, with Nelson riffing off images of floodgates, hustling Scuds and other images of restlessness. "It's about a feeling of motion and coming out of something," said Nelson. "It was a heavy-ish couple of years with a lot of change and movement."

Frontman and Zoltar namesake Jared Zoltar sings in a deadpan style that's reflected in the guitar rock of his Austin band. Somewhere between Jamie XX and Lou Reed, The Zoltars hang in straight rhythms and deep grooves, popping out for an accenting chord in unexpected moments.

Even though there are some abrasive elements in Cool Ghouls discography (fuzzy guitar, fuzzier vocals), there's a pop rock catchiness to smooth out the rough edges while still maintaining what made them hip specters. — Shannon Sweet

Milwaukee quartet Jaill rep all the hallmarks of late-aught indie rock: crunching guitar lines, muscled backbeat and extra consonants. Their 2010 tune "Everyone's Hip" throws the idea of cool on its side, poking holes at the cornerstone of rock 'n' roll with an up-tempo hit.

On Centre of Your Universe, Australia's Wax Witches stick to the pop-punk basics of teen angst and partying in a Down Under update on the originators of the genre — Joey, Johnny, Dee Dee and Tommy.

On The Lemons' 2015 EP Everybuddy's a Lemon, the Chicago quartet sings about their friends' houses over a flirting backbeat, with a tone equally appropriate for fans of The Velvet Underground or Sesame Street.

Sounding like The Monkees had formed organically in a garage, played their own instruments and openly experimented with psychedelics, Las Rosas' signature sound is unique with melodic harmonizing and jangly guitar runs. — Shannon Sweet

Portland's stoned sex symbol Rikky Gage fronts a prolific trio of bands: The Memories, White Fang and Free Weed. All three bands create quick ditties on the love drug and regular drugs, though the foolishness of The Memories allows Gage to stretch his loins in the goofiest and best way possible.

A few years ago, Canadian songwriter Michael Rault was heavy on the neutral vowels and well-worn visions of teenage rock 'n' roll. But with 2012's Whirlpool, Rault whitewashed over his beginnings to try again with warbly keys and a slippery pop attitude. Pulling a page from the grease-stained playbook of Mac DeMarco, Rault borrows the psych-pop feel and cigarette-haze tone from his fellow, more famous Edmonton expat.

Future bands pay attention: aim to match your name to your sound with the clarity and vision of Guantanamo Baywatch. The dark surf of the Portland trio feels like the soundtrack of a remake of the '80s LA drama relocated at America's most famous beachside gulag, with twisted takes on Dick Dale guitar lines and the tortured delight of singer Jason Powell.

Mixing in a dash of punk with slack-jaw vocals and a tightly-crafted garage-pop onslaught, these meaty maniacs from Oakland manage a massive sound that's clean for garage rock and delightfully dirty for pop. — James Courtney

Aside from living in the Burger Records' storage unit, Gabriel Fulvimar's contributions to the label include Shine Your Light, a strutting synth pop album under his Gap Dream pen name.

The Blind Shake is a tornado of manic instrumentation and angry, lo-fi filtered shouts, but they're a carefully calculated cyclone in the most positive way possible. — Shannon Sweet

The guitarist for Mikal Cronin and bassist in Ty Segall's Fuzz trio, Chad Ubovich treats Meatbodies as his personal shred machine. It's a passion project for which we can all be thankful.

If there's something chemically appealing to Matthew Melton's glam rock albums as Warm Soda, you're right. The Tennessee native owes it all to tight pop songwriting, magnetic tape and tuning his A strings down a hair to 432 hz — a combo that hits the ears like salt, sugar and fat melt together on the tongue.

"A was changed from 432 to 440 in the 1940s," explained Melton. "There's no real documentation on the reason why it was changed. It's kind of a popular conspiracy theory, 'cause some people from the Nazi party were part of the decision and it came about at a time in the world when a lot of things were changing. There's a lot of research that suggests that tuning A to 432 will actually connect with people in a better way."

Born in Memphis, Melton began his career as a photographer before transitioning to rock 'n' roll. It's a change in medium that's made Melton content, and creatively successful.

"Rock 'n' roll music is the best form of artistic expression that's ever been done," said Melton. "The reason being that it's so accessible. Not everyone can enjoy seeing art in an art gallery, but everybody likes rock 'n' roll. If you don't, you're probably a square and not really contributing much to society anyway."

After a full day of fuzz pedals and cheap beer, don't burn out before Thee Oh Sees, the band for which the San Antonio music scene (present company included) has held a collective erection over the past few years. Since solidifying the spelling of their name in 2008, guitarist John Dwyer and his kraut/psych/garage pranksters have worked tirelessly to bring nine records to life and establish a rep as the finest live band on the garage touring circuit.