Outdoor Cinema Paradiso: Can the Pandemic Rekindle Our Love For Drive-In Movie Theaters? 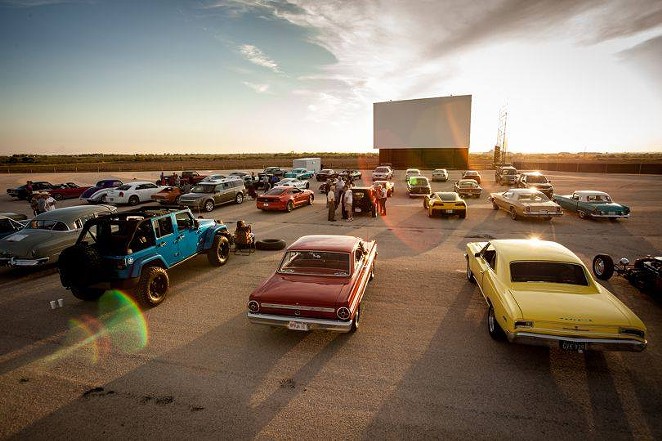 As a kid, the towering screens at the Mission Drive-in Theater on the South Side always caught my attention when coming up Roosevelt Avenue north of Mission San José. Then, in March 1988, as a seven-year-old burgeoning cinephile, I finally found myself at the theater, piled into the back seat of my father’s Chevy Impala, popcorn in hand, about to watch some movie my parents wanted to see called Stand and Deliver.

I can’t remember the second half of that night’s double feature, by the end, I was hooked. I had been to Santikos Century South Theatre — now Santikos Mayan — plenty of times before, but the drive-in was something completely different. As a kid, it felt like watching a movie from inside a comfy fort built out of pillows, blankets and dining room chairs. Plus, they didn’t care if you snuck in Whataburger.

As the years went by, the Mission Drive-in became a staple of my childhood. It would, unfortunately, shutter in 2003 leaving San Antonio with zero drive-ins. Seventeen years later, and with more platforms to watch movies than ever before, it’s really no surprise a movie chain hasn’t spent the estimated $300,000 to $500,000 it would cost to build a new, one-screen drive-in theater in San Antonio. That number, which doesn’t include the price of land, incidentally, comes from the United Drive-In Theatre Owners Association, or UDITOA.

However, it’s an investment that may not look as ill-advised as it did three months ago. The coronavirus pandemic has given families plenty of reason to visit their nearest drive-in theater, assuming there’s one nearby. After all, social distancing isn’t an issue there, assuming you stay in your vehicle.

For locals, the nearest such option is the Stars & Stripes Drive-In Theatre in New Braunfels — a 45-minute commute from downtown San Antonio.

Despite the reopening of indoor movie theaters across the country over the past few weeks, some families are choosing not to head back too quickly. Indoor theaters say they’re implementing new safety protocols. But drive-ins, for some people, just feel safer.

San Antonio resident Joseph Lopez is looking forward to getting back to Stars & Stripes soon with his fiancée. It’s a bit of a drive from his home on the southeast part of town, but he’d rather be in an open-air environment than inside a building right now.

“I’m not willing to go to an indoor movie theater just yet,” Lopez said. “You can keep to yourself at the drive-in. People want to get out and do stuff, but there are still too many people that are taking too many chances. I’d rather be out under the stars watching a movie like the good ol’ days.”

“Getting out of the house and having a safe movie-watching option is something people want,” he added. “The drive-in is a great solution. We’ve been excited to serve our regular guests and introduce some new people to the drive-in theater.”

A quick look on Google Trends shows a steady increase over the past three months in online searches for the phrase “drive-in movie theaters near me.” According to UDITOA, Stars & Stripes is one of the 305 drive-in theaters still operating in the United States and one of just 12 that remain in Texas.

For Smith, going to the movies — whether indoor or outdoor — has always been a communal experience. But at a drive-in, guests get to decide how much they want to share that experience with others.

“You’ll get that sense of community at the drive-in if you want it,” Smith said. “But you can also have a more private experience by being in your own car and in your own environment. People feel safe because they know they can social distance.”

Although the number of drive-ins has plummeted over the past 60 years — the U.S. boasted 4,063 in 1958, according to UDITOA — Smith has always believed they’re a slice of Americana people don’t want to lose entirely.

“The drive-in is family-friendly and affordable,” he said. “They will never go out of style.”

Still, Smith isn’t sure the pandemic will inspire more entrepreneurs to build their own drive-ins. Local theater chain Santikos Entertainment told the Current it has no foreseeable plans to build a drive-in, for example.

But Smith doesn’t think their popularity will wane once the pandemic ends.

“It’s like going to the movie theater, camping and out to eat, all in one place,” he said. “The escapism is incredible. I think there will always be a place for drive-in movies.”