Over-gourd: That's Enough With All the Pumpkin Flavors, No? 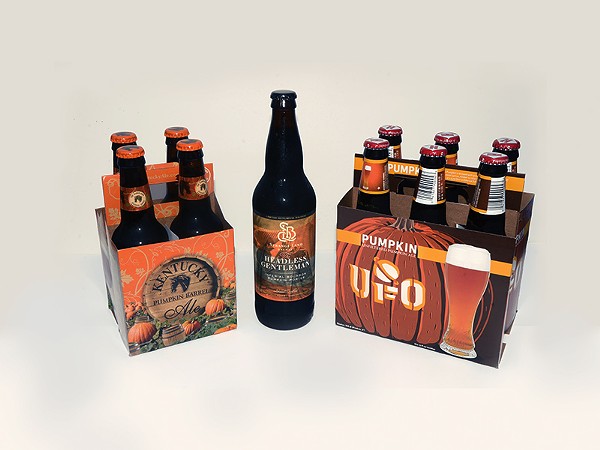 Confession: I may have dabbled in basic activities in a previous life. Like other young 20-somethings, I was thrilled at the idea of the release of pumpkin-flavored anything come fall. Dairy Queen's pumpkin pie Blizzard with pumpkin puree, nutmeg and Graham crackers? Yep, I had it. Starbucks' Pumpkin Spice Latte, the company's longest running fall drink for 10 years? Yep, I was nutty enough to seek them out the minute they became available.

The pumpkin fandom took a turn within the last few years as more and more of the fall gourd seemed to turn up in just about every product. And regardless of actual quality, consumers continue to buy it. Pumpkin spice yogurt, pumpkin spice latte M&Ms, Thomas' pumpkin spice English Muffins, pumpkin spice almonds and pumpkin spice Oreos are all littered on shelves across every grocery store in town. And though we could sit here and advocate against every single one of these items, or go on at length about how butternut squash is actually the best winter squash around, I'll focus instead on the most egregious of pumpkin casualties — pumpkin beer.

As Fortune pointed out this September, the beer variety isn't going away any time soon. If anything, pumpkin ales serve as a gateway beer for seasonals. The fall line up of beers — pumpkin, Oktoberfest and whatever brewers churn out for the holidays — sold more than $253.5 million, according to the Brewers Association. It's lucrative, and ludicrous, but beer fans shouldn't have to drink a slice of pumpkin pie in a pint.

[Slideshow: 30 Reasons Why We Need To Squash The Pumpkin Spice Bullshit]

The other annoyance that goes along with pumpkin ales is how soon we see them on shelves. Whether done purposefully to attract that over-eager audience full of pumpkin-sluts, the onslaught of orange labels at the beginning of August makes for serious cognitive dissonance. It's 90 degrees out, people! This first-to-market mentality means that by the time Halloween rolls around, let alone Thanksgiving when you could actually pair said bier with its namesake pie, there will be little to nothing to choose from. Buy the beers now, if you absolutely must, or wait for St. Arnold's Pumpkinator — out in mid-October since the brewery uses seasonal pumpkins and not canned puree — which is often worth the wait, but comes in limited quantities.

If the basic bitch that lives within you has to cave to the pumpkin cravings, I'd suggest Harpoon Brewery's UFO Pumpkin — a slightly hazy number that's held consistently well through several iterations since its launch in 2011. The aroma is malty and its profile leans more on its German Vienna and Munich malts than trying to mimic a full-blown pumpkin pie. It's also fairly sessionable with a 5.9 percent ABV. Expect a smooth body and commendable middle-of-the-road-ness. Find it on most shelves across town.

My visit to Central Market yielded mixed results. Helpful Kristopher in the beer department pointed me in the direction of two new beers in town, which are making use of bourbon barrels to add some heft to their fall wares.

The bomber, an Imperial Bourbon Pumpkin Porter from Strange Land Brewery in Austin, the company's first limited autumnal release, seemed like a great idea at first. The eerie label promised a malty beverage, but the results were more acidic than we hoped for. Coffee notes came through, but the bottle-conditioned treatment left the beer with an extremely acidic flavor and overeager head that persisted through the last pour.

The highlight for our motley tasting panel of craft lovers and Tecate-prone drinkers was the Kentucky Lexington Brewing and Distilling's Kentucky Pumpkin Barrel Ale. The four-pack of 12-ounce beers came in just under $15, but at 10 percent ABV, this isn't a beer you want to slam. Instead, take in its golden hue and admire the caramel nose. The Kentucky Pumpkin Barrel Ale was surprisingly balanced and not too sweet, and leaned more on its pumpkin pie spices than pumpkin for its flavor. Get your four-pack quick — the 90-degree "autumn" we're in isn't keeping pumpkin lovers at bay. You'll want to get this before it's gone.