Owner of G.I.G. reflects on three years of running a dry, ideals-based venue 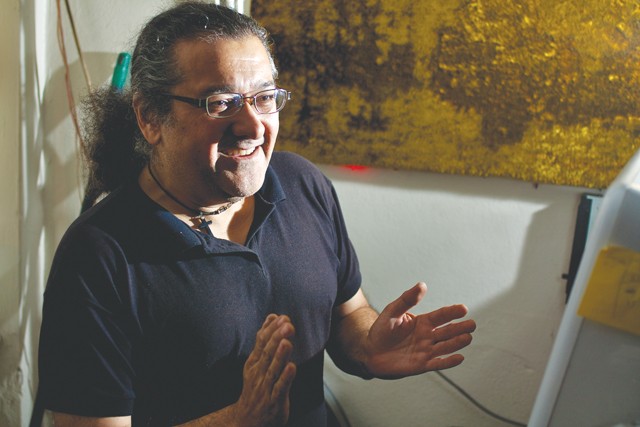 $5 suggested donation, no one turned away

Late last year, Ruben Garcia, owner and promoter at G.I.G. on the Strip, received an offer that every person in the promotions racket dreams of. It began with a piano, donated by his friend Kevin Sanchez. “A wonderful piano,” Garcia said in his trademark fevered cadence on a Sunday afternoon at his venue. “But it had a couple of down keys and the sustain pedal was broken. [People] would always be playing it anyway and I was like, ‘I’m sick of this.’”

Garcia did what he often does: put out a call on Facebook for help. The shout turned up a tuner who urged him to replace the piano outright before making on offer on the club. “‘We can buy you out,’” he recalled the piano tuner saying, “‘put you on salary, invest in better furnishings, a high-end PA [system], knock down walls, and renovate, renovate, renovate.”’

Garcia was speechless. In his third year of managing G.I.G., a booze-free “listening room,” he was trying to make it in an industry so often fueled by drink and screamed conversations over bands and house music. A former horse racing photographer and Express-News reporter, Garcia had lost all his initial investment capital in the stock market after he opened G.I.G. in the summer of 2008. Since then, he’s been in and out of call-center jobs (occasionally collecting unemployment) with G.I.G. always one crisis away from shutdown. Through G.I.G. he’s been a strong supporter of local music, with an emphasis on acoustic acts — often recording his performers and giving them the tapes to use as demos. He books acts six nights a week, splitting what little cash G.I.G. earns at the door evenly with musicians. Until seven months ago, he provided artists with free professional photography. Until his camera broke.

“Lots of people would probably have thrown in the towel by now,” Garcia said, of the years-long struggle. “[But] a series of miracles keeps on happening.”

Garcia took the prospective buyer’s paperwork to attorney friends and thought on it. He’d always imagined G.I.G. getting 501(c)3 status to make the door fee optional and expanding offerings to include daytime lessons in music, songwriting, graphics, and photography. But incorporating might work, too. Above all, he didn’t want to compromise on his overall mission: running a quiet, drug- and alcohol-free, all-ages, all-incomes venue. He was dismayed when the buyers proposed dropping his monthly manager’s salary to around $1,000 and set a buyback price of $109,000.

Now, Garcia greets G.I.G.’s third anniversary with a sense of vindication. He’s working again, his lights are still on, and turning 50 in June means he can collect food stamps. Nonprofit status might come by year’s end. Garcia knows his venue and all its implied ideals turn some people off, but he’s proud of his 50-person-capacity rumpus room with its boho lighting, thrift store furniture, and respectable sound system. Fans and performers keep coming back, despite there being no booze, despite him occasionally telling patrons to quiet down. G.I.G. is doing something right and, to Garcia, it’s simpler than you think.

“When the lights go down and the sound comes up, there’s just a great show,” he said. But what does the acronym G.I.G. stand for exactly?”