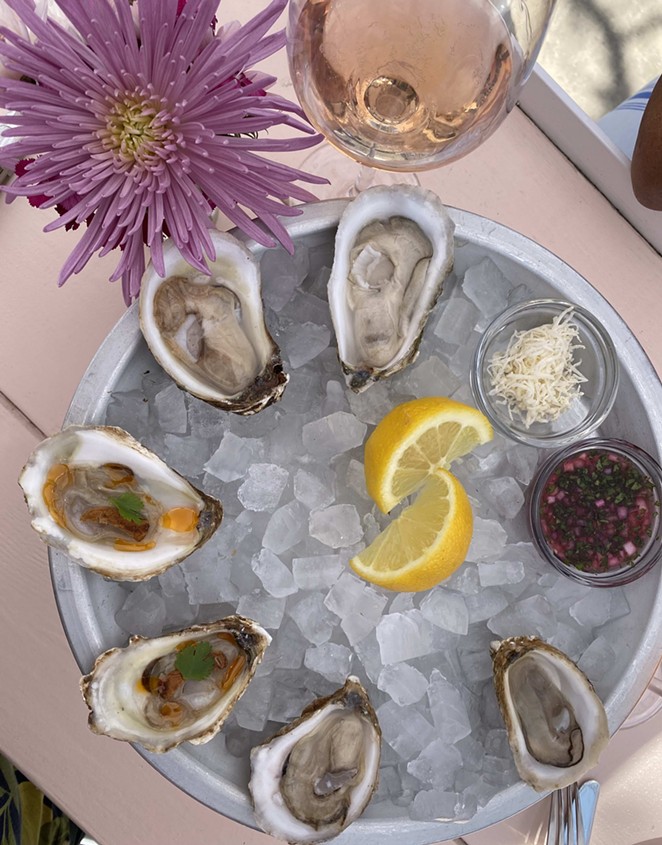 Beausoleil, Acadian Pearl, Shiny Sea, Pink Moon, Savage Blonde, Fire Lake.
They all sound like they could be the pantone colors or shades featured in a L’Oréal ad. Certainly, anything but names for one of the food world’s least lovely edibles when seen in its unshucked state.

But Emily Carpenter and her husband Houston have somehow managed to turn the modest oyster shell into a clever graphic symbol. Not to mention, the presentation of the oysters themselves — along with almost everything else on the menu at their Southtown oyster bar Little Em’s — into a fashion statement, all bracketed in blushing pink.

Lift a coral-hued glass of sparkling brut rosé and offer a toast to Beausoleils, beautiful days and the cautious return of (mostly) outdoor dining.

The oysters I tasted for this review were sourced in early April, a time when they and the season were at one. From northernmost New Brunswick, to southernmost Massachusetts, they all fulfilled the promise of their generally accurate descriptions: delicate, creamy, briny, mineral and buttery. Only the “white mushroom” descriptor eluded me. For what it’s worth, West Coast oysters have been hard to reliably source, according to a server, and there are no Gulf Coast oysters on the menu.

Most of the fresh oysters wanted only a squeeze of lemon, with a whisper of the shredded horseradish, to underscore their freshness. The fried garlic on the dressed oysters, also adorned in the kitchen with chili oil and micro cilantro, was more of a shout than a whisper. Stick with the undressed.

But as summer approaches, oysters, much like humans, become sluggish and lethargic, and their flavor can suffer accordingly. This is perhaps the most important reason to consume them in months containing an “R,” as the old adage goes. But if you insist, it makes sense to opt for ones harvested from the coldest waters.

Not to worry unduly as we edge toward May, for Little Em’s menu has other enticements, including a red snapper ceviche that was one of the best in recent memory. Fresh, almost florally fragrant with mango and cilantro, and given a lift by finely minced jalapeño and fresh lime juice, it was pure poetry. As wild-caught Pacific salmon comes into season from mid-May through September, depending on the species and source, there’s no reason to think the kitchen can’t pull off a poetic slam-dunk with that ceviche, featuring cucumber and bird chilies, too.

Lobster season is year-round in Maine and New Hampshire, though most tend to be harvested from June to December. At $28, Little Em’s lobster roll is petite and presented in a lightly toasted dog-style bun. There’s nothing between the lobster and you but that delicate bread and a little celery. While that sounds desirably pure, it turned out to be a tad underwhelming. Less is not always more, in other words.

However, a squeeze of lemon came to the rescue, as is often the case. If you’re judicious with the assertive tarragon aioli that comes alongside, it also perks things up. While the seasoned herb fries, slim and perfectly cooked, are almost too good on their own, adorning them with the aioli is actually recommended. There are also times when more is decidedly more.

Little Em’s marks the wines on its list thought to be oyster-worthy with an oyster shell graphic. You won’t find a classic French oyster wine such as Muscadet, but the always dependable Albert Bichot, a Chardonnay in the drier French style from Chablis, should work just fine. A tart Sauvignon Blanc from New Zealand will also hit the spot, as would a Sancerre.

Among the big-C Champagnes, the Piper Heidsieck is a reasonably priced choice. Big spenders will appreciate the option of the gorgeous-in-every-way Perrier Jouët Belle Epoque brut or rosé, which pairs well with oysters or the caviar service.

I hit upon the Bouvet Sparkling Rosé from the Loire mostly as an homage to the splendid spring day more than the oysters, but it celebrated both beautifully.

Normally a believer in drinking what you want rather than what the rules say, I’d still avoid reds with the bivalves. Save those for the burger or the filet with lump crab demi and blue cheese. Or just sitting and sipping on the delightful outdoor patio.

Currently, only a single dessert is available daily. Still, I had no complaints with an impeccably executed crème brûlée crowned with a single, sugared raspberry. The torched topping, a shell to be shattered, not shucked, hinted at delights within.

The creamy custard was appropriately plush in response — a fitting coda to a most pleasant afternoon.

The Skinny: Little Em’s is a delightful addition to the street scene in King William, and its freshly shucked oysters prove the promise of the perky setting, indoors and out. Ceviches are also recommended, as are many of the selections on the just-big-enough wine list, especially the crisper whites.