“My pedalboard is my paint pallet — my color pallet,” explained Two Tons of Steel guitarist Will Owen Gage. “This is what I’m using to paint my pictures.”

Gage and blues guitar hotshot Ruben V are among the local musicians who have enlisted local electronics whiz Artorius “Art” Hernandez to help color their sounds. Both use Hernandez’s custom-built pedals to help embellish the tones they wring from their electric guitars.

After learning how to modify and fix effects pedals, he figured out how to create his own, eventually sourcing parts, soldering circuit boards, drilling holes in the boxes and mounting the boards inside. After comparing his work against brand-name pedals, he realized that he had a knack for creating the gear.

“I noticed a lot of people in town weren’t building pedals,” said Hernandez, a welder by trade. “So that’s why I started concentrating on building them a little bit more and not just building one at a time, but 10 [at once] and making them all look uniform.” 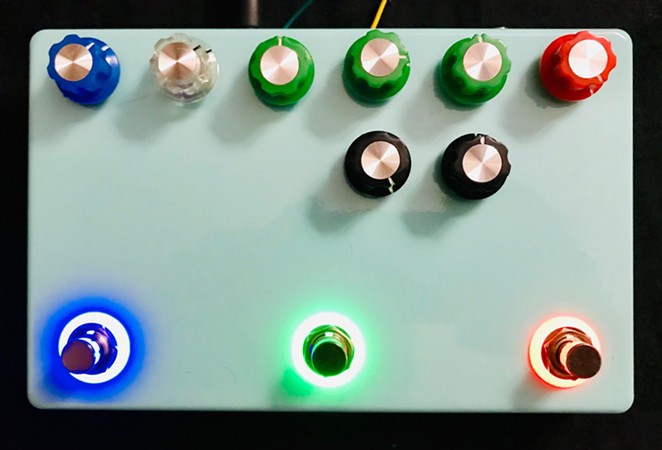 Gage started using Hernandez to fix and upgrade his gear in 2011. After they both ended up on the staff at Redbone a few years later, Hernandez began building custom effects pedals for the guitarist.

“When there weren’t any customers, we’d be just talking about gear and discuss the science behind guitar tone and nerd out,” Gage said. “[Hernadez] told me that he could basically make any pedal but could make them with higher quality components and could customize the circuit to your taste, which was really cool, especially to have someone in San Antonio. Because before I met Art, I never thought that there was anyone in town that can do that kind of stuff.”

“What I like about Art, as opposed to [pedal manufacturer] Boss, and [other brands] is that with them, you’ve got to buy whatever’s out,” V said. “With Art, you can tell him what you kind of have in mind, and he’ll build it for you. He’s great at pulling the vision out of your head.”

Besides building custom pedals for musicians, Hernandez also sells a variety of stock pedals that create common effects like delays, overdrives and distortion. His standard pedals sell for $80 to $120, depending on what they do, and his custom ones start at $120.

Although Ruckus pedals aren’t available in retail shops, Hernandez sells online at facebook.com/ruckusaudiopedals and through face-to-face contact with local musicians. He admits he’s been too busy tinkering to focus on marketing.

“I haven’t been able to do the proper advertising, but one day I would like to just build pedals entirely for custom orders and stock them in a store front,” Hernandez said.